Kansas guard Tyshawn Taylor, left, is pictured with his mother Jeanell Taylor on Friday outside Allen Fieldhouse. The two have been each other’s biggest supporters over the years in New Jersey, Florida and Kansas. 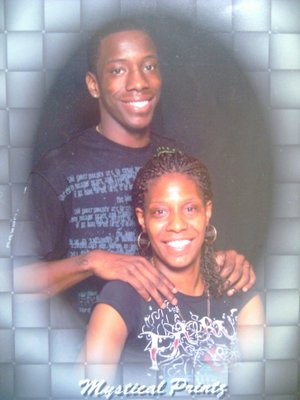 Jeanell Taylor says this photo is her favorite of her son, Tyshawn, pictured above in 2008. In fact, she has this picture saved in her iPhone.

In between bites of salad on a late lunch break Thursday at Hy-Vee, cashier Jeanell Taylor paused to fiddle with her iPhone.

She produced a photo of herself and her son — one snapped in August 2008 in Hoboken, N.J., just days before the start of the 2008-09 school year, Tyshawn’s first of four at KU.

“This is right before I came to college,” Tyshawn exclaimed in acknowledging the iPhone photo passed his eye test.

That’s fine with Tyshawn, who likes being compared to his “best friend.”

“My mom has always been my biggest supporter. She’s always been a big cheerleader of mine,” Tyshawn said of Jeanell, who moved from her birthplace of Hoboken to Lawrence with Tyshawn’s two sisters, Taquana and Tatiana, after Tyshawn’s freshman year.

“I think 75 to 80 percent of the reason why I play basketball is to make sure at the end of the day my mom is happy. She is my motivation. To be able to see her in the stands when I play gives me that extra oomph.”

Though Tyshawn doesn’t live with his mom — he’s at Jayhawker Towers; Jeanell in a townhouse — he’s with her a lot. She usually cooks for him three times a week.

“We talk about everything basically. She tells me her life problems, her boy troubles or whatever, and I do the same,” Tyshawn said. “It’s one of those situations, me and my mom are cool. I can pick up the phone and say, ‘Mom I need this. You got me?’ If she’s got it, she’s got me. If I’ve got it and she needs it, she’s going to have it, too. If she asks for something and I don’t have it, I go get it.”

Though Tyshawn considers his connection with his mom, “more of a big sister/little brother relationship,” single mother Jeanell has served as a father figure as well.

“Me growing up wasn’t easy. My mom did a lot of things I don’t know about so I could make it to the next day or the next month. She’s always been working two or three jobs to raise me and my sisters,” he said.

Her biggest sacrifice has been to relocate more than once for the benefit of Tyshawn’s basketball career. Jeanell, who was born in Hoboken, always had a desire to live someplace else.

“I didn’t want my kids to be raised there,” Jeanell said.

She was able to move the family to Clearwater, Fla. — where some relatives resided — when Tyshawn was in third grade.

“My mom fell in love with Florida and wanted to be in Florida,” Tyshawn said.

Happier than she’d ever been, Jeanell was content to remain in Florida forever.

However ... “On my ninth grade spring break, we went back to New Jersey to visit family,” Tyshawn said. “I went to an open gym at Saint Anthony (in Jersey City) with one of my cousins. I told my mom, ‘I think I want to play ball at this school.’”

“I gave up my location where I wanted to be — Florida — to be where he wanted to be,” Jeanell said, her motherly instincts telling her Tyshawn would be well served playing for legendary coach Bob Hurley at Saint Anthony.

“The high school was good academically. The coach was excellent and he guaranteed he’d get Tyshawn in a Div. I college.”

Tyshawn — he was headed to Marquette until coach Tom Crean bolted for Indiana — in the spring of his senior year signed a financial aid agreement with KU.

“The nicest thing Tyshawn has ever done for me ... the day he committed to Kansas was my birthday — April 29, 2008. He bought me balloons and a big card and gave them to me at the gym when he signed. It’s something I’ll never forget,” Jeanell said.

Jeanell in her two years in Lawrence has done a lot for others — especially Tyshawn’s KU teammates.

“She’s such a nice person. She’ll even cook for us,” said Tyshawn’s roommate, KU sophomore forward Travis Releford. “I love her spaghetti. Whenever I ask, she’ll cook it for us,” he added of Jeanell’s pasta dish featuring shrimp and sausages.

“When we go bowling, she’ll go with us. When we do activities outside of basketball, she is there most of the time,” Releford added.

Tyshawn has come to expect phone calls from mom telling him to come pick up bundles of food for the Jayhawks.

“She’ll put it in a big tub or separate plates for everybody,” Tyshawn said, noting he and the team love her ‘fried chicken and mac and broccoli with cheese.’

“She doesn’t go door to door with the food, but they end up getting it and know where it’s from.

“Those are her boys,” Tyshawn added. “Miss Angel (Morris, mother of Morris twins) did the same thing. Josh’s mom did that,” he added of Maeshon Witherspoon, mother of Josh Selby. “That’s what they do as mothers.

“As much as we say we are a family here, we really are that much of a family. We don’t just scream that and yell that. We really are a family. I think it’ll be that way for a long time, not just while we are in college.”

Tyshawn said he was most proud of his mom late in the evening of Jan. 21. That’s when she hustled over to Thomas Robinson’s apartment to be with him on the night KU sophomore power forward Robinson learned his mother died back in Washington, D.C.

“My mother was hugging him, crying with him, rubbing his back, bringing him food,” Tyshawn said. “It’s the mother in her. Same with Miss Angel. I don’t even think it was a question what they had to do. They knew it from the beginning.”

Tyshawn will try to show mom how much he appreciates her on Mother’s Day today and down the line.

“My mom likes those edible arrangement things. I’ll order her one of those, some balloons and a card. My mother is real emotional. I just have to write some nice stuff in a card and she’ll be happy, crying, give me a hug and it’ll be over,” he said.

Tyshawn, who plans on playing in the NBA after graduation, has designs on giving Jeanell something with more than sentimental value.

“My son has promised me Las Vegas ... I don’t know when it’ll be, but I do just see us — just me and him — going on a long vacation and talking about everything,” Jeanell said.

“He’s thoughtful like that. I would never want to be a parent to any other kid. As the only boy in the family ... we’ve got this little joke. He tells me, ‘Why did you have to have these two?’’’ she added of 18-year-old Taquana, who now lives in Jersey, and 9-year-old Tatiana, who remains here. “Why couldn’t you just stop at me? We would have been fine. It would just have been me and you.”

“She calls me by my middle name every time she talks to me, which is funny,” Tyshawn Jamar Taylor said. “When I was little, she’d call me ‘Tyshawn’ or ‘Ty’ and I would not pay attention. When she called me my middle name I’d answer because I’d know she was serious. To this day, I hear my mother say ‘Jamar,’ I know she means it. She’s the only one who legit calls me that all the time.”

She’s had to take a stern tone toward Jamar more than once in his KU career. Taylor — it’s been well-documented — was suspended late last season for undisclosed reasons, was hurt in a fight on campus and had slip-ups on Facebook in the past.

“As a single mom, it’s tough. You have to provide for them and do everything for them without any moral support from the dad, so it’s hard,” Jeanell said. “With Tyshawn being my only son and my oldest child, I want him to succeed. It’s hard when he does wrong and doesn’t do well, because I want him to do well.”

Despite the blips, Tyshawn has survived — even thrived — and is expected to be the team leader next season, his senior season.

“I have a lot of people here that come into the job (at Hy-Vee register) and say, ‘I’m glad he’s staying (senior year). He’s a wonderful kid.’ They say, wherever they met him, he’s polite. They come up to me and say, ‘You did a good job. Tyshawn is a loving kid.’ I get good feedback on him. It ain’t all bad,” she said, laughing.

Of course if people do have negative things to say about her 21-year-old child, “It’s OK as long as I don’t hear them,” Jeanell said. “I mean that’s my boy. We’re inseparable. I try to be his mom, but we are so close he happens to be my best friend. I guess I’m stuck with a best friend.”