Kansas rookie TE Jimmay Mundine a ‘stud’ in the making 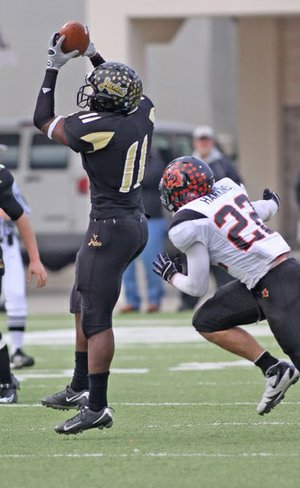 Jimmay Mundine hauls in a pass during his senior year at Denison (Texas) High. Mundine spent last season as a red-shirt on Kansas University’s football team and made a name for himself on the scout team.

He has yet to play an actual down for Kansas University’s football team, but red-shirt freshman Jimmay Mundine already has created some competition.

The story goes like this: Last fall, while Mundine, a 6-foot-2, 250-pound tight end from Denison, Texas, was adding bulk to his then-226-pound frame, he often was asked to put pressure on KU’s first-string defense in practices by being the best tight end he could be. Mundine took the challenge seriously and, before long, was giving KU’s entire secondary fits.

“That kid right there, he’s gonna be a stud,” former KU defensive back Chris Harris said of Mundine. “If he’s not making an impact next year, that’d be a big surprise. He’s a guy that we (had) trouble with every day.”

As the practices went by and Mundine outdid all challengers, he and Harris worked toward a showdown.

“(Defensive coordinator Carl) Coach Torbush told the defense not to even let me catch the ball, and I still caught it on ’em,” Mundine said. “Then, I went against every single defensive back, and I made ’em all look bad except Chris Harris, so it was a big deal because coach (Vic) Shealy walked up to me and asked, ‘Who haven’t you embarrassed?’ I told him it was Chris, and then the next day I embarrassed Chris.”

Though Mundine made a name for himself in practice, he recognized that there was a big difference between starring with the scout team and doing it during a game. Now that his red-shirt season is behind him, his focus has shifted to becoming the same player — perhaps better — when things heat up during spring ball and this fall. It’s something his coach thinks is very possible.

“He has what you’re looking for, the explosiveness,” KU coach Turner Gill said. “He can make plays down the field, he can make plays on the short pass being able to catch and make people miss and go the distance.”

Mundine said it was tough to sit out, especially on Saturdays when he was forced to watch the Jayhawks struggle from the stands. But he said red-shirting turned out to be the best thing for him.

“At first I was mad,” Mundine said. “But then I realized that next season, I’ll be fully ready, and I can be a complete tight end. I’m not saying I’m gonna be starting or anything, but I know I’m damn sure I’m gonna try to get the spot. Me and coach Gill talked about me red-shirting, and he said it wasn’t that he didn’t think I was ready to play or anything like that, it was just that he simply wanted me to learn more and get bigger.”

Originally, there was talk of Mundine moving to a different position.

“When I first got here, coach Gill told me he was looking at me at tight end, and he said if he didn’t like what he saw or I wasn’t doing good then he would move me to linebacker,” Mundine said. “When I went in for my meeting after the season, he told me he liked what he saw and that I was a playmaker, so he was gonna keep me there.”

That’s a good idea according to one KU safety.

“To be honest with you, I know it’s two different levels, but he always reminds me of an Antonio Gates-type of guy,” freshman Keeston Terry said of the San Diego Chargers tight end. “He’s real dependable, he gets open, he has great hands, and he’ll definitely be a great asset to our team.”

If he can live up to the hype, the only thing left for Mundine to sort out will be setting people straight on his full name, Jimmayshun, which people have shortened to Jimmay, pronounced just like it’s spelled: “Jim-May.”

“Right before I was born, my dad’s parents died,” Mundine said. “My grandma’s name was Jimmy, so my mom took the Jim out of that. My grandpa’s name was Maynard, so she took the May out of that. And she put the Shun on there by herself.”

Mundine continued: “When I played football in high school and we played around at different stadiums, no announcers ever got my name right. Unless we were playing at home. When we were on the road, my name was definitely going to be messed up.”

If the progress Mundine has shown so far continues during his second season, it won’t take Jayhawk fans long to learn the name.

I think you mixed up the name associations.

While Jimmy is an unorthodox name for a female, I DEFINITELY don't believe his grandmother was named Maynard. Call me crazy...

So, no, I believe Matt got it right.

Just seemed like something to double check, because the short form "May" is far more likely to be a female name.

(Also any word on four star Pierson or any other four stars Gill is going after this month?)

He embarrassed our secondary. Considering that nearly every other team did the same thing this year, that doesn't mean much.

Hate to say it, but that's the first thing I thought too. And what is the definition of embarrassing? A catch? A touchdown? A whoopi cushion? Cody Hawkins was embarrassing our secondary for awhile. That's really embarrassing. Surely he couldn't have out-done that.

By the way, how does the guy block?

Cocky is as cocky does.

Problem wasn't our secondary so much as it was the total lack of a pass rush. When you have all day to throw, the receiver WILL get open eventually.

Here's the other thing. They just indirectly admitted that a 5th string qb was lighting them up in practice.

A Pop Warner team could have embarrassed our defense.

Wow! You guys already took all the defensive shots i was going to take. Props to you guys.

I'm so looking forward to next year. Where our new qb (compared to mike Vick) is throwing to this tight end (a gates). We'll be unstoppable.

Unless their comparisons are off!!!

Let's not compare any of our QBs to a convicted felon, who has made heinous decisions.

I didn't, he compared himself to mike v. Apparently confidence is not lacking on next years team.

Until they met the big 12 south buzz saw

All the negatives are already taken. Please help me out Fauxhawkinnebr and ahpersecoachingexperience I'm contemplating subversive positive thoughts.

No matter how hard you try to bring Gill down, your hate is backfiring on you..,

Gill just brought in the best class in the history of Kansas football....

With at least one more four star to come!!!!!

It's all thanks to your comments!!!!!

Keep on hating, your comments seem to only yield us better recruits & even a better replacement for Wyatt!!!!!

By the way, what school do you really root for?

I thought the "best class in history" was disproved

At the moment, this is still the best class of the past 10 years if you use Scout's rankings.

No. You keep trying though!

If you're truly a Kansas fan, get on board brother!

This will be a blast of a team to watch in the next couple years...

We're talking a coaching staff second to none in the Big 12....

We're talking speed & size we've never seen before at Kansas in one class.....

Oh yes... And we have one of the best dual threat QB's in the country coming in next year, in fact he's already on campus!

Are you really part of this or not?

Either way, keep posting, because your obvious hate towards Coach Gill is obviously helping his cause!!!!!

That's exciting. I can't wait to see you play Mr. Mundine. So, now that we got the first name out of the way - how is the last name pronounced? Mun-dine (I suspect) or Mun-dean?

Whether this was more about Jimmay or about how bad or first team d-backs were, I'd much rather have an up-and-comer who could "school" them than not have one.

according to KUAthletics.com , his last name is pronounced "Mun-deen."

See horn, rw gets it.

“When I first got here, coach Gill told me he was looking at me at tight end, and he said if he didn’t like what he saw or I wasn’t doing good then he would move me to linebacker,” Mundine said.

Would anyone be shocked if a position switch actually occurs? Nice to know the kid has good hands and can get open but isn't Gill trying to build a dnyasty of a running team? Can the kid BLOCK??? That will be his role on 90 % of the snaps.

If that's the case Mundine will not be playing nearly enough snaps. But that won't be a shock either.

You're right. No way, he will see the field with a negative attitude like that! He's got to put in some hard work and learn to B.E.L.I.E.V.E. first!

I know we need feel good articles at this point but I remember reading similar articles before last season. Tait had a coach in an earlier article give his take on KU's season and the man put some blame on the staff. I'm willing to give Gill a chance but if they aren't in a bowl the season after next, cut your losses and go long. They'll win 4 games next year.

I am a Gill supporter, but I think that's fair! Three seasons to make a bowl in a world where half the teams in division 1 are in bowl games. If things aren't progressing, THEN blame Gill, but I believe those who have already given up haven't given him a fair chance.

I have been waiting for this day: "former KU defensive back Chris Harris"

Yeah, werner24, it's always great to lose a former Orange Bowl starter. That's the surest way to improve your team.

Scouting report: "In addition, the linebacking unit is thin and the secondary is led by a senior who's been routinely burned in coverage, CB Chris Harris, who has just three career interceptions and none last season." - nfldraftscout.com

I hope we get to see him making a bunch of big plays over the next few seasons. My feeling is that the TE was greatly underutilized as a receiver this past year and has been since Derek Fine left.

So, no article yet but I got a Rivals text that said Anthony Pierson, 4 star running back from St Louis has picked us over Iowa, Missouri, Arkansas - go Gill!!!