Kansas players Tyrel Reed (14) and Travis Releford (far right) congratulate Tyshawn Taylor during a timeout in the first half against UMKC on Wednesday, Jan. 5, 2011 at Allen Fieldhouse. 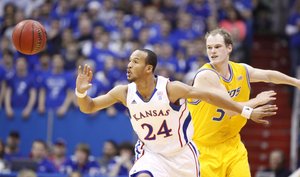 Kansas coach Bill Self talks to reporters following the Jayhawks' 99-52 victory over UMKC on Jan. 5, 2011.

For one thing, the Jayhawks have accomplished what good teams usually do during the semester break. They have turned the extra practice time into more even performances, such as Wednesday night’s 99-52 smack-down of UMKC.

For another, even with senior Mario Little serving an indefinite suspension, Kansas has become a deeper basketball team with a greater number of players giving their coach reason to trust them in tough spots, of which there will be many during the Big 12 schedule.

Third-year sophomore Travis Releford, a utility man, has established himself as a stellar defender, both inside and on the perimeter, and a vastly improved shooter.

Sophomore Elijah Johnson has made huge offensive strides, doing a nice job of distributing, shooting and energizing. He has just nine turnovers in 199 minutes of action and has shot .481 from long range.

Freshman guard Josh Selby, who has a quicker trigger than Will Sonnett ever displayed in a dusty television duel, gets better all the time. In one smooth, lighting-quick motion, Selby morphs from dribbling to shooting and is always lined up correctly. He’s made an outrageous 56 percent of his three-point shots, and most of those have been swishes.

The guards do a nice job of feeding the post with over-the-top passes, and the big men catch what’s thrown their way, big factors in the team’s .537 overall shooting percentage. KU also shoots accurately from long range. Subtract senior Brady Morningstar’s 26 attempts and seven makes and the team is shooting .417 on three-pointers, the equivalent of shooting .626 from inside the arc.

Coach Bill Self can use three of the following four guards and have outrageous speed and two or three three-point-shooting threats on the court: Tyshawn Taylor, Selby, Johnson and Tyrel Reed.

Taylor, who against UMKC played his best game since Selby’s activation, joined Selby and Johnson for a stretch that called to mind the days of Mario Chalmers, Sherron Collins and Russell Robinson playing together.

So everything’s great, right? Well, not quite. Still, the nagging fear that hot-headed immaturity could surface down the road at the worst possible time lingers.

One game after the twins, Marcus and Markieff Morris, drew deserved praise for taking their benchings to heart and hustled their way to big games played with cool heads in a rout of Miami of Ohio, Markieff spent all but four minutes on the bench in the second half because he trash-talked his way into a technical foul.

“With any team, if guys are so selfish that they think about their actions as opposed to what’s good for the masses, that’s a bad play, and, obviously, we’ve had that happen by having to get the last word in or whatever it is,” Self said. “It’s childish. It is going to hurt us. It will cost us.”

Only if it continues. Self again will take measures to try to prevent hot heads from exceeding the boiling point. If whatever it is he does to try to drive his point home gets the intended result, this team could mature into a most memorable one.