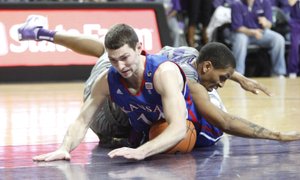 Kansas coach Bill Self talks to reporters following the Jayhawks' 84-68 loss to Kansas State on Feb. 14, 2011.

Mario Little on the loss

“I was surprised at our turnovers (18). We never got in the flow of our offense. We started our offense at halfcourt. We couldn’t execute basically the whole game.”

KU is two games behind Texas in the league race.

“I mean, our focus is to be Big 12 champs,” Little said. “Every day when we break (huddle) we say, ‘Big 12 champs.’ After the regular season we say, ‘National champs.’ We’ll put our heads down and keep working. We still have NCAA ... that’s our main goal.”

“Obviously we are upset with the way we played, but give K-State credit. They caused us to play bad. I don’t think we came in prepared and in the mind-set that we needed to have. We knew it’d be a tough game because this is always a tough place to play. But we are not going to panic. There are obviously things we need to do better. So we will go watch film and get ready for our next game.”

Kansas University junior forward Marcus Morris on Monday was named Big 12 player of the week for the third time this season.

KU on Monday moved to No. 1 in the AP and ESPN/USA Today polls. KU has been ranked No. 1 at some point in five of coach Bill Self’s eight seasons at KU.

With Baylor ranked No. 1 in the women’s poll, this gives the Big 12 the top team in both sports for the first time in conference history.

Texas is ranked second in the coaches’ poll and third in the AP. It’s the second straight season the Big 12 has had the top two teams in the rankings. The first time it happened was on Nov. 30, 2009, when the Jayhawks were first and UT was ranked second. ... KU and Texas were ranked first and second, respectively, for six consecutive weeks during the 2009-10 campaign. ... The Big 12 is the only conference in the country with every team ranked in the top 150 of the latest RPI. Seven squads are among the top 64.

Now it's getting more like a rivalry on the court! The record is what it is without denial. We dominate our "series" matchup with KSU, period. They can celebrate one game, but it is JUST one game! As they say, "even a blind squirrel finds a nut every now and then" This time, the blind squirrel was successful, end of cliche.

if that squirrel was blind, that would make us, Helen Keller.

It's a 2 loss season, so need to keep this in perspective, but I don't see how this team can possibly with 3 in a row, let alone 6 in a row.

Very dissapointed in the Morris twins, who week in and week out completely justify the term "punks". I mean, be proud to wear the jersey or leave. In the history of Kansas basketball your time is brief and you bring dishonor to those who came before you with your attitude. pretty sad.

And, EJ? Are you kidding me? What a joke. Son, either you have the ego of Charles Barkley or you are dumber that a bucket full of hair. Truly pathetic behavior and dumb play when your team is trying to dig out of a hole.

The day Kansas basketball starts to look like the NBA, I don't want to watch any more.

If I were Bill Self, I think i would actually hire Bob Knight as a consultant for a week to clean house. We'll go to battle with whoever survives. At least, they will represent Kansas basketball with class which right now seems the best we can hope for with this bunch, cuz I don't see any trophies in their future.

What exactly did EJ do? He had to have said something because that stare down didn't deserve a T.

I wouldn't call you a racist, but I will say that it's presumptuous to comment on Elijah's family background. I'll give him the benefit of the doubt and believe that he was just trying to give his team a spark that was desperately needed at that point.

I will agree that he went about it the wrong way, but the hooting and hollering is a part of sports culture now. Referees seem to have each drawn their own line in the sand, and there is no consistency as to what gets a T and what does not. I also think star players, particularly in the NBA, are given much more freedom when it comes to taunting and trash-talking. I'm not defending EJ, I'm just saying I've seen much worse behavior slide without a whistle.

Parents and community may not be the root issue. Just study the NBA lifestyle. Why wouldn't the allure of superstardom be overwhealming to a kid with some skills? Thinking that the ultimte reward is to live a lifestyle like sports stars and entertainment icons, the acheivement of goals on the court seems to be secondary to the image of "ballers". The taunting and posing following exciting plays seems to come all too natural for some kids who have the "Cribs" mentality rather than being part of a team and representing a university as a student-athlete. If you want to be on a poster, don't expect us fans to support your goals. We want you to be a team player, not a rock or rap star.

Texas will be ranked number one until the playoffs and maybe thereafter. They are without doubt the best team in the country now, not counting Miami and the LA Lakers. I wonder if their payroll is higher?