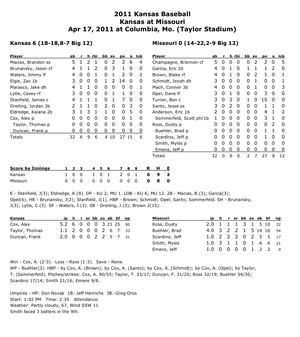 Columbia, Mo. — Freshman Ka’iana Eldredge went 3-for-3 with a key two-out RBI single, while three Kansas University pitchers held Missouri scoreless as the Jayhawks earned their first series victory over the Tigers in Columbia since 1983 with a 6-0 triumph Sunday afternoon.

“He was special today, especially in this environment with the intensity level in this ballpark anytime Kansas and Missouri play,” KU coach Ritch Price said of Cox. “He got into trouble a few times, but every time he got into trouble he made a big pitch and got a double-play ball and got out of it. It was a tremendous performance by a freshman.”

The key moment for Cox came in the second when the Tigers loaded the bases with one out, and the freshman pitcher induced a second-to-short-to-first double play to end the threat. Missouri stranded 12 men Sunday, including nine in scoring position.

Meanwhile, KU scored in the first inning and kept adding throughout the afternoon.

“I was really proud of our team,” Price said. “In the past when we’ve come down here, we’ve gotten boat-raced the next day. It shows how much this team has matured and the toughness that is in our dugout.”

Taylor and Duncan closed out on the mound, pitching the final 41⁄3 innings. Taylor entered in the sixth with the bases loaded and got Brandon Champagne to ground out to first to end the threat.

“They were both really good today, too,” Price said of his relievers. “They allowed us not to have to use (KU closer) Colton (Murray), after he pitched yesterday. That was a great as well. It’s really exciting for not only right now, but for our future to start a freshman and then bring in a sophomore and have a freshman close it out. ”

Ku's pitching and defense are really starting to settle in. This should make them rather competitive going into the Big 12 tournament...and hopefully the NCAA tournament.

Nice work 'fellas. I can't think of a better way to start off my day than reading about some domination of Misery (regardless of how putrid they are). On to the next one.

not the sweep that i was hoping for (all kinds of chances to knock in more runs on Saturday), but we'll take a series win at Moo. not since 1983? that's remarkable.....we just won a series last year in Lincoln for the first time in umpteen years too.

this baseball team has had a solid Big 12 first half....a lot better than i expected. kudos to Coach Price...and we have some arms it sounds like...and we're young so it's only going to get better. it's just so much fun to beat the overhype machine that is Missouri athletics....Go Jayhawks!

Great to see KU beating up on Mizzou!!! Keep the momentum going, 'hawks! J-W Staff: Mentioning the word "baseball" in the actual article would be helpful...

Honest question. I don't follow baseball as much as I should and, therefore, I know almost nothing about our team. So my question is, how do those of you that follow the team more closely really feel about Coach Price and the overall direction of the team?

The statements above sound optimistic, but that could be attributable to the fact that we just beat MU.