Kansas freshman guard Josh Selby draws a crowd during media day, Tuesday, Oct. 12, 2010 at Allen Fieldhouse. Selby, a highly-touted recruit from Baltimore, has yet to be cleared eligible by NCAA officials. 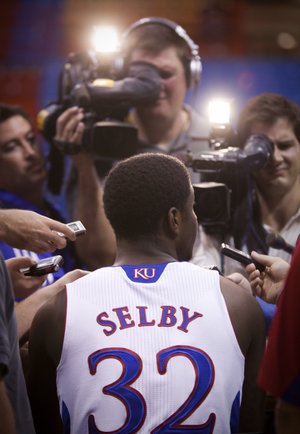 The KU basketball team was on hand for media day Tuesday in preparation for the upcoming season. The team is sporting new uniforms which are supposed to dry faster than the ones used last year.

Kansas University point guard Josh Selby, who is still awaiting clearance from the NCAA to play in games his freshman season at KU, met with the media on Tuesday for the first time since his arrival on campus early last summer.

“I’m excited about Friday,” he said of his playing at Late Night in the Phog, “but I’m not going to think about it too much until Friday. It’s going to be fun playing in front of the fans.”

The 6-foot-2 Baltimore prep sensation said he doesn’t feel pressure in trying to make folks forget point guard Sherron Collins, who has graduated and moved on to the Charlotte Bobcats.

“I don’t feel like I have to be the next Sherron because the fans just want to win and that's all I’m here for, to win with my team," Selby said.

Coach Bill Self, who said there’s really no update on Selby’s status — the NCAA needs to rule on both Selby’s amateur and academic status — said Selby reminded him of a “bigger Sherron.”

“Me and Sherron both bring toughness, physically and mentally, but I think that's what we have in common,” Selby said.

“(I bring) toughness, somebody who can lead you, somebody who’s going to motivate you to work hard and can score. I want to win. That’s my concern ... winning.”

He admitted he was a bit “lonely” at times the first three weeks of school when he hadn’t been cleared to even compete in team activities.

“It was tough for a minute. But my teammates stayed behind me, supported me, motivated me by being there and relaxing my mind, taking it out of my mind. I’m just thankful I have the teammates I have. It’s a big family here. Things always work out for the best,” he added.

For more on Selby and KU Media Day, see Wednesday’s Journal-World and Kusports.com.

When Selby announced that he was going to play for KU, he looked like a kid. In this picture he looks like he is 30! I think the NCAA needs to add an age check!

Like the attitude Selby. Truer words have never been spoken, KU fans want to see the team win...period. Looking forward to seeing you out there on Friday Night.

I love Selby. I love that he seemed to drop his thuggin' tude from the dunk contest. But really, he looks like Gomer Pile now.

Every picture I've seen, since he signed... Gomer.

I love the kid for exactly this.

A Gomer Pile who will posterize you.

I love how people see a kid once in a dunk contest and can conclude that he's a thug.

I have never detected any sort of "JohnWallism" from Selby. This dude has all the talent in the world but it seems like he has a good mentality as well which is so underrated.

This team looks good. This team sounds good. I sure as hell bet that they play good. Preseason ranking means nothing, no matter what it ends up being. Going to be an awesome year I guarantee it. The stars have aligned and I'm having visions of 08.

Ding ding ding!!!! LLLLLLLLet's get ready to rumble!!! Bring it on Hawks, it's gonna be fun. The speed of this team is what I'm anxious to see. Every game could be a track meet.

Yes..looking forward to see KU play more uptempo this year. I think our bench will be plenty deep enough AND KU is coming to NYC for the Jimmy V. Last time KU played at the Garden, Galindo and Downs were fighting for playing time. Can't wait!!

Major announcement by KU tomorrow at 8:20 a.m. Hopefully about Selby being cleared.

Either qualifies as a 'major' announcement.

Clearance for Selby gives a minimal tweak to a team already poised for monster season.

AD selection sets the tone, if not the definition, of UofKs Athletics for the near (and hopefully, mid-distant) future.

It would be very easy to be over-eager in both cases.

"Minimal tweak"? I think you underestimate his power .....

expectations are just reshuffling the depth charts..... Would you think elijah and Travis would not bring the effort if Selby were not able too ? If nieither of them was able readya nd willing, do you think Brady woul scoff at more PT ?

When the team amassed MIGHT be a final four team already, You think that Might gets any smaller with the addition of JS ?

It would be awesome if Selby was cleared right before the KU/K-State football game----then, of course, a KU football win over the kitty kats would be very dandy---that would put all of Jayhawk Nation in a good mood, wouldn't it?

Looks as though Josh and teammates have bonded well during this waiting period. ESPN and SI have offered more extensive coverage today of the Selby situation. I get the feeling that breaking news is imminent, perhaps by the opening of Late Night. NCAA clearance would represent a significant victory for KU and fans, even before the season's games begin!

I have never been a fan of Dick Vitale, but I had always wondered why so many fans on this site disliked him with such passion... Well I now understand.

Has anyone else seen where he placed KU in his infamous pre-season poll? I have. Number 25. 25! Behind even Missouri.

I hate to sound like a homer, and I know pre-season polls hold little merit, but putting KU at 25 is a slap in the face. Based solely on our roster and coaching personnel, we should at least be in the top 15 (I would even argue top 10.)

His placing KU at 25 is either out of spite or sheer ignorance, or both.

I've been sitting here trying to grasp what might have been his rationale for placing us so low. He must completely ignore Kansas basketball to think we will be that bad just because we lost Cole and Sherron.

I don't post often, but I check this site and its blogs a couple times per day, and I've always been in agreement with those who believe we will be at least as good, if not better, this season than we were last year with Cole, Sherron and X.

Needless to say, I am now anti-Dick with the rest of you. I just do not see how a rational, intelligent person could possibly let a team with KUs athleticism and talent slip to number 25 (unless that persons ACC bias made it impossible for rational thought to penetrate his thick skull.)

I mean, even without Selby--whom I believe the NCAA is soon to make eligible--we are still better than 25, imho.

Anyway. I thought I would throw that out there for all those Vitale haters. Am I the only one who thinks he is using some very skewed logic? Any other thoughts?

P.s. We thought KU got snubbed for being picked to finish second in the Big 12, but Dicks snub seems almost personal.

Welcome to the Club.

I can tell you exactly what he's thinking....

Errors in his logic, Cole was slow and chunky on offense neithe rof which the M and M's are. Both Peanut and PLain can stretch the floor significantly further than Cole. Tyshawn moving to his natural spot of natural floor leader is PIVOTAL, just as it is pivotal that Selby plays the Pseudo Two ala Mario Chalmers. You need at least two guys who can bring the ball up on the court at any given time, you got one main ( tyshawn) who distributes, and you have the tempo changer ( Josh ) who can just change the way offesne looks just enough to make teams wince. Sherron was both by default last year because tyshawn cannot grasp how to be that off PG. He understands being the man, he's always been the man, and he arguably was better at the PG than sherron was capable. ( In a perfect world, tyshawn would have been 1 and Sherron pseudo 1 but because of sherron's under 6... it was not logistical.... Sleby does not present that problem )

Finally, here is my list in order of people i expect to see playign time at the 3 this year.

I'm fimrly comfortable with 4 of these guys giving us 12ppg this year, and the last reworked his jumper this year.

Dick doesn't see what His acc cronies won't tell him. Even without JS, this is a top 10 team.

He's rating a team that lost its' best players who also are on a 1 game losing streak to Northern Iowa. I say let these guys go back out there and earn a high ranking.

Dick appears to be "getting it"...the resounding message that he is not much loved in Lawrence. That #25 prediction is an outrageous insult not only to this hardworking talented team, but also to Bill Self and his staff. Just the kind of publicity which will add an extra ingredient to the challenges faced by the 2010/11 Jayhawks. Unless Dick's KU ranking is not a personal insult, then he really does not know much about judging NCAA roundball talent.

What happened to the "Major Announcement" at 8:20 AM that rcjh22 was touting?

610 sports said there was going to be a major announcement and it just turns out they had a new radio deal. Sorry

For me, it's that Vitale talks so much about Duke and UNC during every game. It seems like his highest priority is watching those two teams, his second is talking about them, and somewhere down the line is calling the game in front of him.