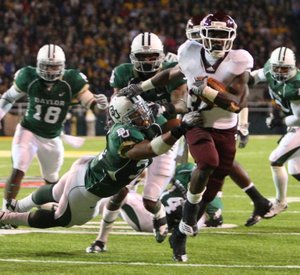 Texas A&M Running back Cyrus Gray (32) scores on a run as Baylor defender Chris McAllister (31) tries to make the tackle Saturday in Waco, Texas. Gray accounted for four touchdowns in the game and is one of the main reasons the Aggies are on a four-game winning streak.

College Station, Texas — Cyrus Gray had a role in No. 18 Texas A&M’s offense before fellow running back Christine Michael broke his leg Oct. 30.

But since the injury, Gray has carried a much bigger load — and his 259 yards and five touchdowns in the last two games have been crucial in extending Texas A&M’s winning streak to four games.

Gray spoke with Michael on the sideline the day he broke his leg. Michael has given advice and encouragement to his teammate every day since, becoming a sort of personal coach to Gray.

“We discuss opponents and talk about their weaknesses and how to prepare for the week,” Gray said. “It’s a great opportunity. He’s doing that for me and it’s really helping me. He’s just been extra eyes on the field telling me the holes I need to hit or the ones I might have missed.”

Gray has four consecutive 100-yard rushing games and might need another big week if the Aggies (7-3, 4-2 Big 12) are going to make it five straight wins when they face ninth-ranked Nebraska (9-1, 5-1) on Saturday.

“I think the opportunities and being hungry and running with more passion,” Gray said of his success. “We’re in a position where we have to win each week and that’s a big step for all of us. It’s a load on my shoulders and I have to carry that.”

Gray was a running back early in high school, but played quarterback his senior year. He started at running back for the Aggies as a freshman, but had a tough time readjusting to the position and finished with 363 yards rushing. He improved last season and ran for 757 yards.

He got off to a slow start this year while sharing time with Michael, but began to take off in the game before Michael’s injury and had 117 yards rushing on just 13 carries in A&M’s 45-10 victory over Kansas on Oct. 23 in Lawrence.

“I just see a guy that keeps getting better and better as the weeks go on,” Texas A&M coach Mike Sherman said. “I don’t think we’ve seen his best yet. I think his best is still out there.”

Gray is always looking for ways to improve. For example, he and defensive star Von Miller spent spring break at Michael Johnson’s performance center in the Dallas suburb of McKinney. The track star and Olympic gold medalist helped the pair work on their running techniques and initial bursts.

The extra work appears to be paying off. Gray has run for 673 yards and 10 touchdowns this season after scoring just six TDs combined in his first two seasons with the Aggies.