Down and out: Cold-shooting KU women eliminated by ISU in WNIT

Kansas' Carolyn Davis turns away as Illinois State's Katie Broadway reaches for the ball Thursday, March 25, 2010, during the second half of a Women's NIT game at Redbird Arena in Normal. 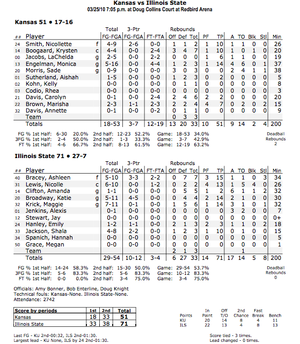 NORMAL, ILL. — Bonnie Henrickson spelled out Job One during the offseason.

Dreadful first-half accuracy dug an inextricable 33-18 hole, and the Redbirds cruised to an easy WNIT Sweet 16 victory. KU made six of 30 shots, a frigid 20 percent, in the first 20 minutes.

Illinois State concentrated on stopping KU post standout Carolyn Davis by double- and triple-teaming her, essentially daring the Jayhawks to hit outside shots. They couldn’t do it.

“We needed to hit a couple of shots to bring them out,” Henrickson said, “but we couldn’t get anything to fall.”

Davis attempted only three shots. She missed one and was fouled on the other two, converting 2-of-4 free throws to finish with two points. Henrickson sat her most of the second half.

Curiously, as bad as the Jayhawks shot in the first half, they made 12 of 23 attempts in the second half, but all that did was prevent a complete blowout.

Senior Sade Morris logged 38 minutes, was 0-for-9 from the field and was held scoreless for only the second time all season. 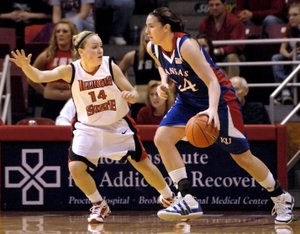 Photos from the Jayhawks' WNIT game against Illinois State on March 25, 2010.

“She wasn’t aggressive,” Henrickson said of the 5-11 wing. “I told her, ‘Aren’t you insulted they aren’t guarding you?’”

Morris finished with the second-most games played in school history (131) and wound up with 1,276 career points.

As bad as KU’s offense was, the defense wasn’t much, either. While the Jayhawks were filling Redbird Arena with bricks, Illinois State shot 53.7 percent and nailed an eye-opening 10-of-12 three-point attempts.

“How many of those were uncontested?” Henrickson said of ISU’s three-point shots. “We had poor focus and poor concentration on defense.”

Freshman Monica Engelman led KU with 14 points, but missed 11 of 16 shots, including 10-of-12 in the first half. Junior Nicollette Smith contributed a season-high 10 points and Krysten Boogaard added 10 more, all in the second half.

The Redbirds (27-7) gained a measure of revenge after falling to Kansas, 75-72, in the WNIT last season in Lawrence. The Missouri Valley Conference regular season champs also snapped a 12-game losing streak to Big 12 Conference teams.

After advancing to the WNIT championship game last season, the Jayhawks finished with a 17-16 record. KU won only four of its last 13 games after losing preseason Big 12 player of the year Danielle McCray to a knee injury in early February.

Illinois State will play host to Illinois in the WNIT quarterfinals.

basketball is REALLY over now.....

Hmmmmm. Maybe we ought to be talking to the Illinois State coach.

Congratulations, Lady Jayhawks! Great season from a group that has faced some signficant adversity. NJJayhawk, usually I agree with your assessments, but this time I don't. Lew's dedication to women's sports is extremely evident and I think that our bball team has been affected by some pretty signficant injuries. I don't know if Bonnie is the right fit for KU, but she was very successful at UConn and I don't think her coaching skill is the issue. I also don't think it is true to say that Lew doesn't care.

Bonnies record at VT was smoke and mirrors btw-she wasn't always in the Big East during that time some of it was the A-10. She has never went past the Sweet Sixteen(well last years NIT I guess lmao), she can't recruit flat out ballers(yes Kansas can sell WBB because of their MBB program trust me), and she isn't a good X and O coach.

I suppose it is extrememly naive of me to suggest that only people who were truly interested in Lady Jayhawk basketball post comments here??????????? I'm prepared to give Bonnie another year. We have some great talent. I do wish she'd be more demonstrative during games.........but that's not her style, I guess.

Maybe Lew can hire one of the mens coaches, or a former player in coaching now. I hope whatever he does he looks to UConn's staff first.

dougmd and onlyoneUinKansas....just to let you know.....Bonnie NEVER coached at UConn!!! She has coached at VT, and an assistant coach at University of Iowa....so please get your facts right before you talk.....also....unless you have watched these women through all their ups and downs you have no room to talk because you dont know what has happened to them....so we would all appreciate it if you know what you are talking about before you speak...thanks...great season lady hawks!!!!