Kansas guard Tyshawn Taylor wrestles for a loose ball with Lehigh guard Marquis Hall during the first half, Thursday, March 18, 2010 at the Ford Center in Oklahoma City. 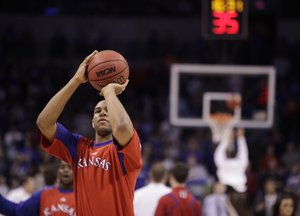 Oklahoma City — Building an early eight-point lead against Kansas University wasn’t much of a consolation prize for Lehigh’s players following Friday’s 90-74 loss to the Jayhawks.

“We expected to get a lead at the beginning,” Lehigh freshman guard C.J. McCollum said. “We were just trying to sustain throughout.”

“With a team as strong and as deep as Kansas is — 12-4, that isn’t really going to cut it for the whole 40 minutes,” Carrington said. “I think that it more was shocking to other people in the building that realized we came to play. It kind of shocked them.”

KU answered with a 15-0 run of its own, and the Mountain Hawks never led after that.

“Maybe it woke them up a little bit,” Carrington said. “We didn’t feel any particular joy or cheer. We knew it was a long game.”

Added McCollum, who scored a team-high 26 points: “We knew if we got up, that really wouldn’t really matter, because eventually, (Kansas) coach Bill Self is going to get into them, and they’re going to pick up the intensity as well.”

Carrington admitted that he’d seen a lot of growth from KU forward Marcus Morris — both in his strength and in his play — since the last time he’d played against him in high school. Both players are from Philadelphia.

“His game has expanded as far as being able to shoot the ball,” Carrington said. “Before, he was a decent shooter. Capable. But now, I think, his game at his height, that allowed him to stretch the floor.”

Carrington wasn’t offering many more compliments to Morris, who posted a career-high with 26 points on 12-for-15 shooting.

“Today, I can’t really say he did too, too much. A lot of his damage came on offensive rebounds and tip-ins and stuff like that. Pretty much anybody can do that kind of stuff,” Carrington said. “He had a couple nice moves, made some quick moves to the basket. He had a good game. Congratulations to him.”

Carrington, who finished with 17 points on 7-for-15 shooting, wished that his team could have performed better.

“I think they kind of caught us on an off night shooting-wise. We missed some shots that we normally make,” Carrington said.

I was told once if you find yourself in a hole stop digging.

We won't get many more wake up calls.... we have to arrive at the gate not only awake but also ready to dominate.

Perhaps Lehigh woke em up and now the next 5 teams will be wondering why????

Carrington's going home for the summer. Marcus is still playing.

This is all Obama's fault. I bet if Sarah Palin picked us, we'd have won by fifty.

bbeckum - put a lid on it. This is a basketball board.

“Today, I can’t really say he did too, too much. A lot of his damage came on offensive rebounds and tip-ins and stuff like that. Pretty much anybody can do that kind of stuff,” Carrington said..

Please show this to Marcus Morris and he will have another 26 point game against Northern Iowa.

This comment just shows the difference in class between Kansas and Lehigh.

Lehigh has gone home...That is all that matters and they should be thankful that they drew KU and were seen by millions of people. Probably more people that have watched them in their history (combined). Carrington put us some shots that I am not sure he still believes that he made..It really didn't matter if Lehigh lost by 1...they still are at home no matter what. It is easy to give credit where credit is due, but hard to give credit to someone that thinks he can actually outplay either one of the Morris twins....Not now, Not ever... Good luck Hawks....we are all here pulling for you even though we can't be there.

Glad the nation got to see KU play, us in E TX were stuck with the Texas game. We were given 5 short snips of live play but CBS did have the score and time on the screen all the time. I was so glad to at least see the score and time.

Can't blame Carrington. How do you expect a guy to answer after getting bounced from the tournament. They all can't be as classy as CDR was.

@55jayhawk - Actually, the nation didn't see the game. West Coast folks like me were and will again be seeing Washington on at the same time. Have to watch overall #1 online, not in HD.

Carrington is a pompous jerk. Too bad his comments will be taken as the way that the rest of the Lehigh team felt. I thought they played hard and never backed down. For that their team is to be commended. Carrington himself however needs to go home and do some growing up. Rock Chalk!!