The Kansas University men's basketball team will enter the NCAA tournament on a high note after defeating Kansas State to take the Big 12 tournament title.

Assuming Duke is the fourth No. 1 seed, which team do you not want to see as a No. 2 seed in KU's bracket? 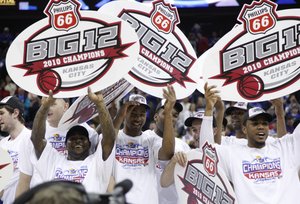 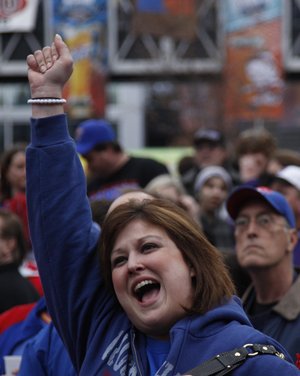 Tyrel Reed, who scored a career-high-tying 14 points in a victory over Missouri this season in Allen Fieldhouse, burned Kansas State for a personal-best 15 points in Saturday’s Big 12 tournament final in Sprint Center.

“Nothing too special. I was a recipient of my teammates playing well,” said the junior guard from Burlington, who hit three of four shots (including two threes in two tries) and seven of nine free throws.

“I don’t worry about anything. I just shoot the ball, whether it’s a clutch time or beginning of the game. I feel I’m a good shooter at all times. I enjoy being in the moment, stepping up and knocking down shots.”

His teammates certainly respected his effort against a gritty KSU team.

“Tyrel is our designated three-point shooter,” senior Sherron Collins said. “He came through for us again.”

“We’ve come to expect that from Tyrel,” noted sophomore Tyshawn Taylor. “He’s a good player. I’ve known that for a long time.”

It’s all but certain KU will be awarded first and second round NCAA Tournament games at Oklahoma City’s Ford Center (Thursday, Saturday) when sites and pairings are announced at 5 p.m. today on CBS.

If KU is No. 1 seed in the Midwest Regional, the Jayhawks could march to St. Louis for Friday/Sunday games the following week.

“We’ll watch it as a group,” Self said of today’s TV show. “I think we’ll go to Oklahoma City. To be honest, K-State should go there, too. That’s fine. It means nothing to me. We’ve not excelled in Oklahoma City at times.”

Collins “bumped his knee,” Self said of KU’s senior leader. “Hopefully, that’s not an issue. He’s hopefully on an uptick. He really played well.”

“I think that’d be great. There’s nothing like coming back home and playing in front of Oklahoma City people. Many of them only get to see him play on TV,” Carl Henry said Saturday from his seat eight rows behind KU’s bench.

“I don’t think he will feel pressure,” Carl added of Xavier, who, like C.J., starred at Putnam City High. “He just plays the game. There’s no pressure in coming home. You just play the game.”

Carl, whose sons played for his Oklahoma City Athletes First AAU program, commented on decisions both players will have to make shortly after the season ends.

Xavier has to announce whether he’s entering the NBA Draft by the league’s deadline date of April 25.

“Actually we’ll sit down at the end of the season and see where he is, talk about it, then we’ll deal with it,” Carl said, adding that, “if he’s high in the draft, he has to go (pro).

“To me, we have to see how he feels, see if he wants to come back,” Carl added. “There’s a lot of stuff that plays into it if you want to go pro, like where they (NBA officials) have got you on the mock draft, what they are saying, then you decide whether you want to go or not.”

Carl said Xavier is only thinking about trying to win a national championship. Once the season ends ... “it shouldn’t take long (to decide) because they moved the date. The way they do things now you have to decide really quick whether you are coming back or staying in.”

C.J. Henry has been limited by injuries and also will have to make a decision on his own future.

“C.J. ... that’s another thing ... we’re going to sit down and talk. I know he’s going to visit with coach Self and whatever comes out of that meeting, that will determine what he’s going to do,” Carl said.

“He could do a lot of things. He could go overseas. He could decide to stay at Kansas. He could sit out and go to another school. He could go to the D-League (NBA Developmental League). Actually, he could put his name in the (NBA) Draft. Nobody’s seen him play but an hour (this year because of injuries).”

Junior center Cole Aldrich and senior guard Collins were named to the all-tournament team with K-State’s Denis Clemente and Jacob Pullen and Texas A&M’s Donald Sloan. Collins was tourney MVP. It is the first all-tournament team honors for each, while Collins became the sixth KU player to take home MVP honors. ... KU is 7-1 in Big 12 title games. ... KU has won six in a row over KSU and 10 straight over the Cats in conference tourney play, seven in a row in the Big 12 tourney. ... Aldrich pulled down eight rebounds, moving him into 10th place on the KU all-time rebounding chart (842). Aldrich moved past Clyde Lovellette (1950-52), who collected 839 rebounds. ... KU held Pullen to just 13 points after allowing the junior guard to score 20 or more in its previous two meeting this season. ... KSU committed just five turnovers, tying Missouri (Jan. 25) for a KU opponent season low.

Self on the ’Cats

“I think their team could seriously make a Final Four run. I don’t know if we’ll play anybody who pursues the ball like K-State in the tournament. I thought they competed so hard, and we did, too. I would feel good regardless of who you are playing. But having a chance to beat in what our estimation is one of the best teams in the country in a great atmosphere against your state rival in Kansas City, I think makes it a little bit more special than if we had been playing somebody else.”