Blue team guard Elijah Johnson looks to dish as he is guarded by red team center Jeff Withey during the first half of a scrimmage at the Horejsi Center for Bill Self's annual basketball camp Wednesday, June 29, 2010. 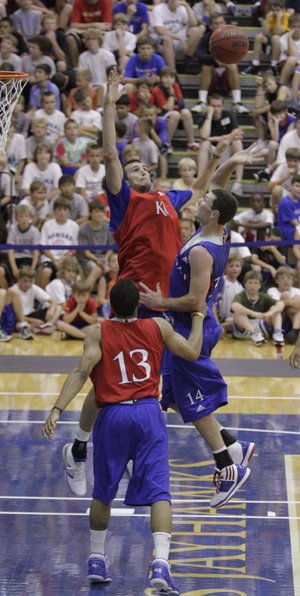 The crimson squad had a shot to win it but C.J. Henry's three-pointer banged off the back iron. That led to a jumper by Elijah Johnson on the other end, which gave the blue team a three-point victory.

Tyshawn Taylor led all scorers with 25 points and seemed to do whatever he wanted on offense in the second half.

Tyrel Reed led the victorious blue squad with 24 points, 11 of those coming in the first half.

Overall, the game featured dozens of jump shots and very few highlights. Unfortunately, the lowlights were plentiful, as Marcus Morris missed the second half with some sort of injury and Thomas Robinson and Markief Morris also missed the final few minutes of the contest after colliding in mid-air and banging heads.

As for the questions facing this year's team, the guard position appears to be in good shape with Reed and Taylor both playing well and Henry and Elijah Johnson also playing well.

Aside from today's fluke injuries, the post position appears to be in good shape, too.

The biggest question for most seems to be at small forward, where Mario Little and Travis Releford are expected to step up. Neither player did much during the scrimmage but both looked comfortable throughout and each had his moments.

KU coach Bill Self told campers following the scrimmage that all three injured Jayhawks would be fine. Self described Marcus Morris's injury as "a bad fall" and said that Robinson and Markief Morris just banged heads.

For more, check back to KUsports.com later today.

Taylor and Reed continue to go at it with the teams now one bucket away from winning.

Tyshawn Taylor has led a come back by the crimson squad, which has cut the blue lead to two.

Taylor has 20 points to lead all scorers. Reed is right behind him with 19.

The announcement was just made that the first team to 65 wins.

Two more Jayhawks hit the deck as Robinson and Markieff Morris collide in mid-air and bump heads. This after Morningstar tweaked an ankle after a jump shot.

Robinson is tending to a bloody nose, Morris also appears to be holding his nose.

Little, Robinson and Markieff Morris have returned to the floor but there’s no sign of Marcus Morris.

The action has picked up a little with an alley-oop from Taylor to Releford and a monster dunk from Robinson, who switched over to the red team during the break.

Thomas Robinson scores on a rebound and pump-fake and in the process Marcus Morris goes down with an injury.

Morris attempted to walk it off but went back to the ground. Several teammates are huddled around him and the campers in the stands have started the "Mar-cus, Mar-cus" chant.

After about 3 minutes on the ground, Morris got up gingerly, unable to put much weight on left leg.

Morris was carried off the court by his brother along with Little and Robinson.

There will be a two-minute break for halftime.

The game has been pretty up-and-down in terms of pace but not incredibly athletic. Both teams have settled for jumpers a lot of the time, with very few drives to the rim. Of course, both teams are hitting their fair share of jumpers too so that could be why.

Newcomer Niko Roberts has five quick points and the blue team has jumped out to a 10-point lead.

Mario Little looks comfortable with his mid-range jumper and Markieff Morris just drained a wide open three-pointer from the top of the key.

Tyrel Reed has hit two three-pointers from the corner and another jumper in the face of Jeff Withey. Another three from the wing has Reed leading the way with 11 points early.

Hawkins shows he's still got some quickness with a steal in the backcourt and a lay up.

At the first dead ball, Conner Teahan, Jeff Hawkins and walk-on Justin Wesley check in for the crimson squad.

Thomas Robinson, Brad Witherspoon and Jordan Jueneman have checked in for the blue squad.

Taylor continues to look good on both ends of the floor with a strong block of a shot by Morningstar from the corner.

The alumni scrimmage is under way and only two alums are in the house.

Jeff Hawkins and Brad Witherspoon are playing for the

Starters for the game are:

The game opened with a driving dunk from Taylor.

For 800 or so campers, the highlight of this week’s Bill Self Basketball Camp is the annual Kansas University alumni/current players scrimmage in KU's Horejsi Center.

No one knows who will play in the game until tip-off, which usually happens after 3 p.m., following a game between KU camp counselors and the actual campers.

In the past, players such as Billy Thomas and Keith Langford have scored more than 30 points in the 45-minute action. Others have included the likes of Scot Pollard, Julian Wright, Greg Ostertag, Aaron Miles - generally whatever players happen to be in town the week of the game.

Though the scrimmage is never publicized beforehand, fans never get turned away if they show up.

This much we do know, freshman Josh Selby will not play because of a broken little finger on his left hand.

One alumn who is in town is former guard Jeff Hawkins, now the head boys basketball coach at Perry-Lecompton High. Russell Robinson also may be around but no names have been officially revealed.

Check back later for live updates from the scrimmage.

Thanks for the title change.

Why couldn't we have this sort of intensity against UNI?

UNI's strategy was just to back off and let the Jayhawks shoot. Taylor led the way by going Oh Fer Six.

Sherron was 0-6 from three and 4-15 from the field. How does all this sh*t fall on Taylor. He is the biggest Kansas scape goat of all time.

Will, want, perspiration and talent - blend carefully for championship results

For opening game tip off I believe the lineup will be

J love your enthusiasm, love the thought of Trob moving that quickly.....

with line change at the 4 minute mark....

Reed,releford, and robinson line comes over the boards with what ever point guard and Big have establised.

Followed closely by the Henry, Brady and Withey line....

Woolridge joins brady withey on the checking line..... when they are in need of deploy.

for all your KU and KSU needs! It's an up and coming website that covers all things KU and KSU. Go to the page, follow us then go to