Sharp-shooting Reed knows all about rivalry

The Fieldhouse crowd rises to its feet as Kansas guard Tyrel Reed hits a three pointer over Missouri forward Keith Ramsey during the second half, Monday, Jan. 25, 2010 at Allen Fieldhouse. 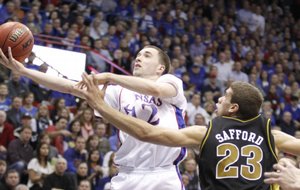 It’s not uncommon for Kansas University basketball players, recruited from all over the nation, to say they arrive at school treating Missouri as if it’s any other school and then they learn to hate the Tigers. The way some say it, it seems as if what they learn is to say they hate Missouri in order to placate the fan base that worships their every dribble.

Steadily improving Kansas junior guard Tyrel Reed, who is to his team what John Paxson and Steve Kerr were to Michael Jordan’s Chicago Bulls, didn’t have to learn to hate the school from the neighboring state. He can’t remember ever feeling any other way about Don Fambrough’s least favorite institution of higher learning.

“Growing up in Kansas, since I was a little kid, I’ve known about the Kansas-Missouri rivalry,” said Reed, a native of Burlington. “Being in grade school and not liking the kid next to you because he’s a Missouri fan. It’s just that big a deal to people around here.”

Just as he did a year ago in Allen Fieldhouse, Reed took his hatred out on the Tigers by playing a gem against them. He made all four of his three-point attempts Monday night and matched a career-high with 14 points in 19 minutes of KU’s 84-65 victory.

In the past two games against Mizzou, Reed has made seven of eight three-pointers. In 61 career minutes against the school that had him in for an official visit and recruited him hard, Reed has just one turnover. It came in his 60th minute, when he drove into the lane and threw a pass to the wing that was intercepted.

Reed’s faster than he is quick, but he’s gotten quicker. Once a defensive liability, he’s come a long way in that area.

Still, the thing he brings to the team better than anyone is the ability to drain three-pointers. He has made 44 percent this season, 41 percent for his career.

As is the case with classmate Brady Morningstar, Reed keeps the ball moving and seldom spills it. Reed has more steals (16) than turnovers (10) and has 26 assists.

His big night came in handy, given a rare off night from Sherron Collins. Collins makes two of 11 field goals, and KU turned it over 23 times and still won by 19 points. What does that say about the nation’s No. 2-ranked team?

Said Self: “Nobody stepped up any bigger than Tyrel. I thought Tyrel was really great for us tonight.”

“I love playing against Missouri, Kansas State,” Reed said. “You know, rivals. Being a Kansas kid, it’s a big deal.”