• Keegan: This one was wonderful

Following KU's 71-66 win over Cornell, do you think that was Sherron Collins' best game as a Jayhawk? 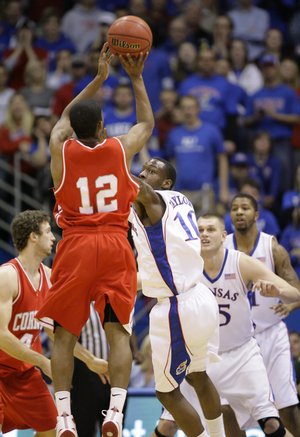 Sherron Collins led the Jayhawks past a close one against Cornell with a career-high 33 points.

There was one problem. Morningstar was having none of it.

What followed was an interesting set of events that took place near midcourt.

“Brady shows that fight all the time,” Taylor said. “You’ve just got to push him a little bit.”

Finally, Taylor gave up, screaming out a few choice words in the stubborn Morningstar’s direction: “Lock him up!”

“He didn’t score again (from the field),” Morningstar said of Wittman. “I made sure of that.”

Morningstar responded to the challenge with his best defensive work on Wittman in the final nine minutes.

Wittman, who led Cornell in scoring with 24 points, finished the game by missing his final four three-pointers. That included a missed, double-clutch three-pointer that would have tied the game with 10 seconds left.

“He dribbled once, and I got a hand on the ball as he was going up,” Morningstar said. “He kind of juggled the ball, and I think it kind of threw off his shot a little bit.”

Self’s take on the Taylor/Morningstar incident was this: “Tyshawn said, ‘Let me have (Wittman),’ and I said, ‘You’ve got him.’ Which is good. Then he went to tell Brady that we were switching, and Brady said, ‘No we’re not.’ Which is even better.

“There’s some competitive juice going on on that deal. I think we made the right decision.”

Morningstar, who prides himself on being a defensive stopper, said Wittman presented a tough challenge with his strength and size.

“What type of competitor would you be if you didn’t want to guard the best player?” Morningstar said. “That’s the type of mind-set I have going into it. I want to guard him. Let me guard him.”