Kansas players Markieff Morris, left, and Sherron Collins defend as Oklahoma guard Tommy Mason-Griffin throws a pass from the floor during the second half, Monday, Feb. 22, 2010 at Allen Fieldhouse. 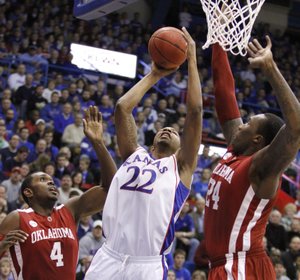 Monday’s 81-68 loss to top-ranked Kansas University was one of those games Oklahoma coach Jeff Capel would like to have back — at least the start.

In front of a national television audience, on one of the biggest stages in the land, Capel’s crew took the court and laid an egg.

“I thought we were excited to play,” Capel said. “But I thought we were a little tight early. And that’s what this place (Allen Fieldhouse) does to you. We just dug a hole, and it was tough to get out of, especially in a place like this.”

Oklahoma (13-14 overall, 4-9 Big 12) missed its first nine shots and allowed the Jayhawks (27-1, 13-0) to jump to leads of 13-4 and 26-9. From where Capel sat, the most frustrating part about the nine misses was that they came off of good looks. Senior Tony Crocker missed a pair, freshman Tommy Mason-Griffin misfired from long range, and the Sooners got nothing inside.

“When you’re on the road against this caliber of an opponent, you have to be able to score the basketball,” Capel said.

The rough start did not send the Sooners packing. Instead of sulking for the final 30 minutes, OU scrapped. It started with a 10-0 run that inspired Kansas coach Bill Self to call a timeout.

First, Cade Davis (13 points, eight rebounds) converted a three-point play. Tiny Gallon followed with a quick bucket, and Crocker dropped in a layup. Davis followed that flurry with a three-pointer to make it 26-19 with 5:54 to play in the half. To summarize, OU scored more points in its two-minute run (10) than it had during the first 12 minutes of the game.

“I thought it was the one thing we did all night,” Capel said. “I thought we competed. But those stretches that we did not score really hurt us. (Kansas is) the best team in the country for a reason, and they have a chance to win the whole thing.”

Oklahoma outscored KU, 39-37, in the second half and even threw a bit of a scare into the home team in the final minutes. Although the outcome was never in doubt, OU cut the Kansas lead from 24 points to 12 with just over two minutes to play.

“I thought we did a good job of just fighting,” Davis said.

Despite being undersized and outmanned — leading scorer Willie Warren missed a second straight game because of an ankle injury and illness — the Sooners competed in rebounding (trailing just 39-33), limited their turnovers (nine) and, for the most part, stayed out of foul trouble.

But the one area they never got a grip on was how to slow down KU freshman Xavier Henry. Henry torched the Sooners for 18 first-half points on 7-of-7 shooting, en route to a 23-point night, his fourth-highest scoring output of the season.

“I thought our defense in the first half was good on everyone except Xavier,” Capel said. “I called one defense when we were shooting a free throw, and (another Sooner) called another, and it led to a three-pointer for Xavier right in front of our bench.”

Added Davis: “Just his size, his shot; he’s legit. He had a great first half, and that really hurt us.”

"doomed by slow start"? You've got to be kidding. They were doomed by playing a much better team.

OU was doomed before the game even began.

The score did not reflect to game. It was like watching a cat playing with an injured mouse. Had KU played with the complete focus they took to UT, it would have been a 30 point game.

Self will use this as a motivational tool. Though I agree that it looked as if we were almost toying with them in the second half. We never let them get close enough to be a threat. It could have been a different game though if it would have been 10 or 12 points different at halftime. Mason-Griffin made some amazing plays, Davis had another strong outing against us, and Fitzgerald was solid as well. With Willie Warren, OU would have given us a heck of a game.

Bob, for some reason thought that we were up by 21 at half, though. Brent couldn't correct him because he was constantly running to the concession stands where he kept his icy-cold stash of Ensure.

Bobby, as is typical, tried to start predicting what was going to happen about 10 minutes into the second half. The guy's not bad for 3/4 of the game, but the last 10 minutes are almost impossible to bear. I'd rather listen to their liverspots commentate.

OU was doomed by one other thing ... their program is coached by another overhyped, underwhelming Shooshefski disciple.

I think the officials sloppy play in the second half was the only reason they came back at all. They were mugging Aldrich.

“When you’re on the road against this caliber of an opponent, you have to be able to score the basketball.”--Jeff Capel

And do you not need to "score the ball" against another caliber of opponent?

And at home can you get away without "scoring the ball"?

I know all coaches say dumb things from time to time, but this quote is just representative of Jeff Capel's shallow insights about his team's loss to KU. He's blaming the venue. He's blaming the caliber of the opponent. He's blaming his team for not being able to "score the ball" and for coming out tight. Jeff Capel is in way over his head and its showing.

Any recruits out there thinking of OU think twice.

Capel has quite a lot of talent this season and he battles .500.

Capel is like a lot of coaches. When they are holding a hand full of aces, as he was last season with the Griffin brothers, Willie Warren and a good supporting cast, they get their 30 wins.

But when they have to make do with a deck missing some cards, they cannot mask their team's shortcomings. And as the season wears on the opposing coaches figure out how to take away enough parts of the opponent's game that the losses start building up.

Capel is a card player holding a hand that requires some bluffing and clever betting to get the most out of it and he really doesn't know how to do it.

As I've said elsewhere, Self would win 20 games with Capel's team this season.

Willie Warren would be on a part of an absolutely overwhelming national champion, right now, if he had signed with Self instead of Capel.

And had the Griffin Brothers come to KU, instead of OU, KU might have won a ring last year, even with Blake's injury, something OU had no hope of doing once Blake was injured. Why? Blake, his brother, Cole and Sherron, plus Tyshawn, would have overwhelmed all teams last year including UNC. And when Blake got hurt, KU, would have been a Number 1 seed already. And KU last year with Blake's brother swinging at the 3/4 positions, would have made KU, even without Blake for the tourney, easily capable of beating UNC, the eventual winner.

So, listen up five-star recruits, don't waste your time in Norman. Don't worry about how many good players KU has. When you are a 5 star with experience, Coach Self will find a way to use you to win a ring.

Elijah Johnson might have played somewhere else this season, instead of sitting much of it, but here's the thing: next season, The Prophet is going to be plug and play in the hunt for a national championship.

Lawrence is the place to be, whether you're a guard like Willie Warren, or a big like Blake Griffin, or a tweener like Blake's brother, or a guy who has to wait a season, like Elijah.

Playing for rings is where its at, whether its for one season, two, three or four. Getting a ring stays with you forever.

If only guys would quit wasting their time in places like Norman, Oklahoma, thinking the PT will come easier, KU would have the best nucleus of players year in and year out winning rings each season.

This is what a smart 5 star should want.