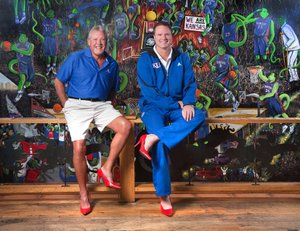 No one in the world is surprised to see Pollard do this (I love that guy!). Self, on the other hand, that's pretty funny.

wonder if he'll coach in those at some point

God I hope not. There's got to be a better way to show your support against domestic violence.

LMAO. exactly what i was thinking Brickwall

right, because we don't want those fans to show how cool they are by deriding the fact that our coaches and alumni are committed to protecting the innocent...

Sorry but this is pretty dumb thing to do. If it was red bras would they be wearing them?

I agree! Now if it was a white lace bra..that's another story.

The idea is to get attention. It's advertising 101. NFL players wear pink for breast cancer month and it works. This works too.

Don't let your homophobia control you.

Just contacted one of the organizers. She said to mail a $20 check to The Willow Domestic Violence Center, P.O. Box 633, Lawrence, KS 66044. And, they will mail you one.

Did you see Pollard's guns? Dude looks like a defensive end.

I want to see Lace Dunn in a pair of these

Only in Lawrence. haha. That will fuel the flame for the Grapes.

Thanks to everyone who participated. My cousin Claire, who was killed by her ex-boyfriend, felt strong and powerful and independent when she wore her red high heels... many of her friends wore them to her memorial service. Seeing this article brought tears to my eyes. I would love to order one of these calendars! Is there some way to order online?

Thank you for sharing your cousin's story. I just contacted one of the organizers. She said you can mail a $20 check to The Willow Domestic Violence Center, P.O. Box 633, Lawrence, KS 66044. And, they will mail you a calendar. For more information, contact Audra Fullerton by e-mail at afullerton@willowdvcenter.org.

This IS great advertising for a subject most colleges towns won't talk about. Congrats to KU! Six KU alums walked in a LA walk, it was really fun. Never saw a calendar before would love to send to my friends...how do I get them? Thanks for who ever came up with this one and for the participants. Hope I can get back to Lawrence for the walk.

An organizer said you can mail a $20 check to The Willow Domestic Violence Center, P.O. Box 633, Lawrence, KS 66044. And, they will mail you a calendar. For more information, contact Audra Fullerton by e-mail at afullerton@willowdvcenter.org.

JHawk in Mexico, I'm so sorry about your cousin. Thanks for sharing the story with us. You can never have too much publicity for the horror of domestic abuse.