With Kansas University junior tailback Rell Lewis out for the season, sophomore Toben Opurum settled in at linebacker and sixth-year senior Angus Quigley the only back with game experience, only one logical conclusion can be made about this year’s running-back corps. 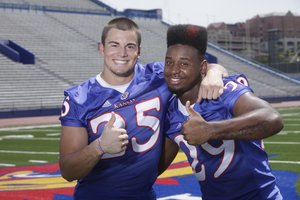 True freshmen Brandon Bourbon and James Sims can play. And they’re going to.

“Those two guys are in the mix with Quigley and (red-shirt freshman Deshaun) Sands,” KU coach Turner Gill said earlier this week. “They (were) in the mix whether Rell Lewis was there or not. We still have another week where I want to continue to evaluate guys, but all four of those guys have some potential.”

Gill said two backs are ahead of the pack. However, he declined to provide names. Judging by the most recent depth chart, where Quigley sits at No. 1 and Sands is listed second, the two more experienced Jayhawks could be those guys.

Both Bourbon and Sims have drawn praise from teammates and coaches throughout camp, and both have made the most of their time on the field during practices and scrimmages.

“All of them have had a little taste of success,” Gill said. “We will settle in here as we go along and decide who the top guys are and go from there.”

For now, the only sure thing appears to be Quigley, who is expected to start the season opener against North Dakota State on Sept. 4 in Memorial Stadium.

Much-maligned throughout his time with former KU coach Mark Mangino, Quigley has shed a few pounds and found the new start invigorating.

“I’m excited for him,” said sophomore Kale Pick, who just last week learned he would be the Jayhawks’ starting quarterback.

“He’s definitely waited his turn, and he’s a hard worker. I think he’ll have a good season, and I’m really excited he’s getting an opportunity to start for us.”

As far as which back will get the bulk of the carries or deliver the stats, most Jayhawks say it doesn’t matter.

“If we do our job, they’ll be able to do their job,” left tackle Tanner Hawkinson said.

“It’s easier for them if we do our job so that’s what we try to focus on.”

One of the biggest questions this offseason centered on whether Jayhawks could find someone to play opposite Jake Laptad at defensive end. Several different D-linemen have played their way into good standing with the coaching staff at that spot, with another, junior Quintin Woods, adding his name to the mix last week.

“We’ve had a lot of (defensive ends) who have done some good things,” Gill said. “We’ve said (Tyrone) Sellers, we’ve said (Kevin) Young and I think lately here Quintin Woods has improved his play, too. So he’s definitely in the mix on the opposite side of Laptad.”

In addition to those three, Gill recently announced that first-string fullback Steven Foster, a junior from Sedgwick, also would get reps at defensive end. True freshmen Pat Lewandowski, Keba Agostinho and JaQwaylin Arps also could challenge for playing time, though Gill has said only a handful of true freshmen would play this fall.

Sellers and Laptad are listed with the first team on KU’s most recent depth chart.

Red-shirt sophomore Tanner Hawkinson, a tackle from McPherson, recently was named one of the top offensive linemen in the nation by Rivals.com in a preseason power-ranking feature broken down by position.

Hawkinson, 6-foot-6, 293 pounds, was one of three offensive linemen from the Big 12 to make the Top 20, joining Colorado’s Nate Solder, who ranked fifth, and Texas’ Kyle Hix, who was 18th.

Hawkinson, the site wrote: “... was a tight end when he arrived on campus, but the Jayhawks needed him to play tackle. All he did at his new position was earn second-team Rivals.com Freshman All-America honors, starting all season at left tackle.”

Regarding the picture with this story: If we really have girls holding blocking pads/tackling dummies in practice, our running backs are in for a rude awakening. Come......on! Isn't she better suited for getting the water cooler ready or taping ankles? We don't have anybody a little more physical than that to pop running backs during drills?

As for the sudden emphasis on DE: Perhaps it's true that Torbush plans to use some 3-4 to "manufacture depth" for the defensive front? DT is the weakest link on the team. I could see Laptad with his hand on the ground as the 3rd DL. Stephen Foster doesn't fit the prototypical DE mold, but he might fit as an OLB in the 3-4 scheme.

Ahhh, I believe it was OSU's coach, Mike Gundy, who made the statement about "intramurals" and the Big 12.

But you can call her, Becky!!

Are any of these DEs OLB material?

When I saw the picture of Bourbon and Sands I thought that Kid n' Play were back together. Nice HIGH and tight!!!!

As for the girl with the blocking dummy, perhaps you should all try to run through a guantlet of them held by anyone before you make judgements.

When I saw the picture of Bourbon and Sands I thought that Kid n' Play were back together. Nice HIGHTOP FADE!!!!

Angus will have a great year if he holds onto the ball.
He has a history of fumbling waaaaaay too much. He doesn't need to run over anyone, just secure the ball & move the chains.

I don't want to hear about a half a dozen DE's. How about a couple of beasts that nobody can block?

We are thin at linebacker, thin at D-line, and thin at blocking pad holders... Please remove that pic before my friends from other schools get ahold of it.

Seriously, the picture is terrible. His eyes are closed, his face is squinted, he's looking away, and his hand gesture is feminine. All while working his way through some hands and a woman holding a dummy. Just terrible.

LMFAO! I didn't notice the hand.

Not to mention the girl with the blocking pad knocked his helmet sideways!

And that's not Sims. Are you even paying attention?

Don't know any of these guys (other than quigley) cuz I live too far away from home. Hope they all have amazing careers as Jayhawks.

BUT, did anybody notice SI.com has the top player that wore each number from 0-49 in the history of the NFL?

Two Jayhawk runnings backs hold that all time slot for numbers No. 40 and 44. If you don't know each of these dudes, your not a fan so sign off.

Here's hoping one of these young kids has half the success. That would be a great outcome!

PS Curious if anybody knows, but I assume 2 out of 50 puts us in pretty good company with the rest of the Big 12? I know for sure there was a CU honorable mention in Byron Whizzer White former supreme court justice, but didn't really connect any of the others to Big 12 schools??

After further review of the pic, it's clear what is going on.

He's just trying to knock it away & keep it out of his mouth!!!

I think college women make really good motivation for these men. You're probably witnessing a genius at work. Is speed important when hodling pads? It's just an obstacle course.

More importantly, young men need to learn about women and how dangerous they can be for them in life. Give credit to HCTG for preparing young men for life.

Another perspective is, HCTG has a daughter at KU, yes? Well, I think if he is a good father then finding ways to include women in his chosen career without using pom poms is a good thing.

And now I will again point out how women now occupy the highest college graduation rate ahead of men, thanks to men's irrational preoccupation with....umm....posting on web boards, oh shoot!

Anyway, as I say, kudos to Coach Gill, and bring 'em on! It will make our team the toughest in the country, and most successful in life. Epic-building at KU.

The 80's called, they want their High Fade Weave back.

"bleeding-edge" adopters had hightop fades in the early-to-mid 80's, late adopters were in the late 80's and early 90's.

my buddy had one in '84. it wasn't exactly a hightop, but it was definitely a fade (one of the best i've ever seen, btw).

all this talk about haircuts on a FB board. sheesh.

You removed my 8/27 post because I stated the young lady in the photo was bigger than Sands? Exactly what part of that comment violates the terms of service? Is it untrue? Was it obscene, demeaning or objectively offensive? It was certainly not intended to be or contain any of these characteristics.

These are serious questions. I don't believe I did or said anything derogatory or inappropriate, therefore I'd like an explanation from Jesse or Matt, please.