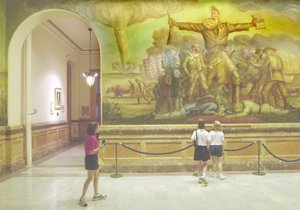 John Steuart Curry’s mural “Tragic Prelude” at the Kansas Capitol was the inspiration for a poster made by a group of KU students.

One of the things that Andrew Stanley — co-creator of the John Brown poster that surfaced recently at Kansas University’s Allen Fieldhouse — has learned in his career as an amateur sign-maker is that, on many occasions, bigger is indeed better.

Sitting at a table outside the Kansas Union on Thursday afternoon with a group of friends, for instance, Stanley was explaining how the group’s most recent project had come to fruition.

“I was talking to people about how we could do some new things,” said the senior Latin-American studies major. “I was trying to get some new free throw distractions organized and things like that. And then I was thinking, ‘Let’s just do something big.’”

Stanley, who is tall and stubbly faced and apparently spends a great deal of his time devising new ways to display his support for Kansas athletics, is kind of the unofficial Godfather of the Kansas student section — a title that stems from the KU senior’s ability to seemingly have a hand in any poster of consequence displayed at a Kansas athletic event.

During his freshman year four years ago, Stanley and his cohorts had the idea of bringing large cutouts of players’ heads to games — a practice that has become an Allen Fieldhouse staple in recent years. In 2007, meanwhile, during the Border War football matchup at Arrowhead Stadium, they unveiled the notorious “John Browngino” poster, which depicted former Civil War-era abolitionist John Brown stationed beside an American flag.

“Except instead of John Brown’s head,” said Daniel Perez, a recent KU graduate seated across from Stanley, “it was (Mark) Mangino’s.”

Most recently, however, Stanley and his group — which go by the moniker “KU Heads for Victory” — have earned quite a bit of attention for their adaptation of the John Steuart Curry mural “Tragic Prelude”, which depicts the aforementioned Brown clutching a rifle in one hand and Kansas’ 2008 men’s basketball national championship trophy in the other.

This was unveiled during the Jayhawks’ 90-65 men’s basketball victory over Missouri last Sunday, much to the pleasure of the game’s sold-out crowd, members of which snapped countless pictures of the sign and showered its creators with a good amount of praise.

The success of the John Brown poster seems to have had an energizing effect on the “Heads”, who, as students entered and exited the Union building and campus busses roared nearby, took turns describing the effort involved in creating such a notable piece of work.

As it happens, said Stanley, the John Brown poster owes much of its existence to a snowstorm last weekend that left highways icy and made long-distance travel difficult. Originally, Stanley had planned to drive to Overland Park to visit family on Saturday, before returning for the Kansas basketball game the following day. Unable to do so — and finding himself with a day’s worth of hours to kill — he decided a good use of that time would be to put together a 14-foot-wide poster of John Brown.

After calling a group of friends — including Perez and current KU students Andy Lavin, Grace Sha and Jo Cox — for assistance, the group kicked off what would prove to be a fairly strenuous, 12-hour poster-making process. In a nutshell, that process went like this: group members printed off the 171 sheets of paper that would make up the poster (a $41 cost), tracked down a large deal of cardboard ($10), glued each sheet onto said cardboard, got kicked out of a Kansas University library, went to Marvin Hall, ordered Jimmy John’s, took a break to go to a party, realized after the party that they needed more tape, drove to Wal-Mart, discovered that a display TV set was running a replay of Kansas’ 2008 NCAA national championship victory over Memphis, decided to watch it, purchased the tape and got home in time to fall into bed by about 5 a.m., four hours before they were due at Allen Fieldhouse to ensure their seating arrangements would be adequate.

Not long after, the poster — despite a few game-day kinks — was welcomed with a standing ovation when it appeared on the video board before the start of the Jayhawks’ victory.

This wide-spread popularity has not seemed to result, however, in visions of grandeur among members of the group. While their most recent work has been compared to the famous “Beware of the Phog” sign — the brainchild of two former KU architecture students who fashioned a sign out of 10 stolen shower curtains in 1988, a replica of which now hangs in the Allen Fieldhouse rafters — the “Heads” insists that the Phog sign will likely never be topped — even by them.

“We were certainly inspired by that,” Stanley admits. “But that’s obviously the greatest sign ever, so we weren’t competing with it.”

It would be understandable if, following last week’s inspiring performance, group members decided to rest on their sign-making laurels, but the whispers out of the “Heads” camp indicate that this is not exactly the case. For Saturday’s 3 p.m. Kansas-Texas matchup at Allen Fieldhouse, the final home game of the 2008-09 season, the group is apparently going all-out in its pre-game preparations.

Concrete details of the forthcoming plan are limited, but, as Stanley pointed out, leaning forward in his seat for emphasis, “We’re planning something that is going to put the (John Brown) poster to shame.”

Right about then, a student wearing a T-shirt and a pair of baggy cargo shorts walked by, noticed Stanley, and wandered over to say hello. He also added, before departing with an excited grin on his face, “I’ve been hearing some of the planning going on for the game Saturday, and I’ve heard good things!”

A few moments later, after the student had disappeared, Stanley admitted that he had never met that person in his life, but said it was a good illustration of the bond shared by the more gung-ho supporters of Kansas athletics.

Stanley then spent a few more minutes describing the particulars of the John Brown sign, which is currently folded up in his car, before gathering his things and politely excusing himself.

Before leaving, he summed up his group’s most recent work this way: “We were just motivated to do something huge and to use that platform to make a sign. It’s such a great rivalry, and we just thought that the John Brown mural had such a great significance.”

“Also,” he added, “we figured it would be the best way to stick it to Missouri.”