Ballyhooed Ames High recruit keen on business (and, yes, KU is on his list)

Ames High School basketball player Harrison Barnes looks on during practice at the school in Ames, Iowa. The 6-foot-7 standout has been pegged by many as the top prospect in the country. 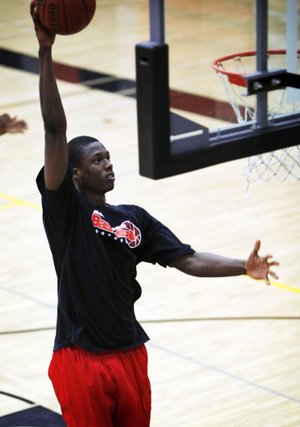 Ames High School basketball player Harrison Barnes shoots during practice at the school in Ames, Iowa. The 6-foot-7 standout has been pegged by many as the top prospect in the country.

Ames, Iowa — So you’re Harrison Barnes. A 6-foot-7 basketball player headed into your senior season and pegged by many as the top prep prospect in the country.

Do you watch Game 2 of the NBA finals? Nah.

Do you spend your summer playing nothing but basketball? Nope. You pick up golf, figuring a strong short game might come in handy in the business world someday.

Do you march to the beat of your own drummer? Definitely.

What Harrison is, according to those who know him best, is a driven and remarkably mature 17-year-old.

Barnes carries a GPA over 3.0 and he’s halfway through the best-selling book, “The Millionaire Mind,” with a book about investing genius Warren Buffett next up on his summer reading list. Whatever school he attends — his long list includes Duke, Kansas, North Carolina, Oklahoma, Stanford, UCLA, Kentucky, Texas Christian, Iowa State, Minnesota and Florida — needs to have a business program as good as its basketball team.

“It’s important because I need a school with a lot of connections in economics, to set me up with internships and job opportunities after college,” Barnes said.

That might sound like lip service from a kid with a half-dozen Facebook fan pages set up in his honor. After all, Barnes’ first job after college is likely to be in the NBA.

So how did the nation’s top prep player end up in Ames, a relatively obscure Midwestern college town? His mother attended Iowa State and met Harrison’s father, former Cyclones star Ronnie Harris. The two never married, and Shirley went to work for the university while raising Harrison and his 10-year-old sister.

While Barnes is hitting the books, it’s his basketball skills that have garnered the attention of nearly every major college coach in America.

Barnes led Ames to a 26-0 record and a state title last winter, though it was his eye-opening stint on last year’s summer circuit that helped turn him into a top-10 prospect. Ames teammate Doug McDermott insists it’s Barnes’ work ethic, unselfishness and leadership that set him apart.

“Even though he’s the No. 1 player in the country, he’s not like those guys at all. Some of those guys are probably arrogant and kind of selfish when they’re playing, but Harrison is the complete opposite,” said McDermott, the son of Iowa State coach Greg McDermott.

Van Coleman, an Iowa-based recruiting analyst who’s been in the business for more than 30 years, said Barnes reminds him of Chicago Bulls forward Luol Deng and his basketball smarts are reminiscent of Grant Hill.

“Not only does he have the skills and the athleticism, he thinks the game at a level above most players that he plays against,” said Coleman, who has ranked Barnes first in the Class of 2010.

Barnes has made it clear to coaches not to bug him for a decision because he’s not planning to rush it. True to his meticulous nature, Barnes takes a spiral notebook filled with academic and basketball-related questions on every visit he makes.

Two years ago, Downs told his players to take a week off after the end of a grueling season. A few days later, Barnes left his coach a 6 a.m. voicemail from outside the school gym, wondering why the doors were locked.

Downs tried to remind Barnes, then a 14-year-old freshman, about the value of rest. Downs said Barnes simply told him, “Coach, we can’t win championships taking a week off.”