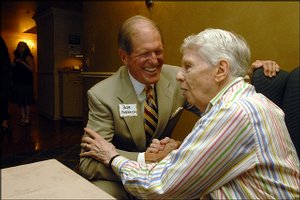 To Kansas University student-athletes, he was Dr. Frederick. Others simply called him Dr. Bob. But to his friends — and that includes many of us media-types — he was simply Freddy.

Bob Frederick’s death Friday night hit a lot of us hard, particularly those of us who called him Freddy.

That he would die as a result of a bicycle accident made it even tougher to accept because we thought he was the safest cyclist in the country after a mishap nearly killed him in 1994.

While riding out by Clinton Dam, he spilled, rolled down into the rip-rap and suffered three broken ribs, a punctured lung and a broken shoulder blade. Doctors told him the only reason he wasn’t killed was because he was wearing a helmet.

Later, after becoming spokesman for the helmet-safety program of the Safe Kids Coalition, he liked to quip that he was “the poster boy for bicycle helmets.”

Who knew that 15 years later a helmet he was wearing while cycling would not save him.

Bob Frederick’s goal after graduating from Kansas University was to become head coach of a major-college basketball program. To that end, he paid his dues as a high school and junior-college head coach, then as an assistant coach at three universities — Kansas, Brigham Young and Stanford.

But he became disillusioned with the seamy side of college basketball and decided to return to KU and pursue a doctorate in education.

“I became convinced,” Freddy said, “I needed to try to change it, not run away from it.”

Eventually, he earned that doctorate, putting bread on the table by working as a Lawrence High chemistry teacher and as the Lions’ boys basketball coach.

Think about it. How many 37-year-olds with a wife and kids would have made a career decision like that?

That was Bob Frederick. His soft-spoken, deliberate manner belied an inner drive that spurred him not only to academic challenges but in physically demanding pursuits like the marathon and triathlon.

Everything Freddy did demanded respect. The man exuded class. He dressed spotlessly. He spoke thoughtfully and intelligently. For 14 years, he was the face of Kansas University athletics, the epitome of what most people thought an athletic director should be.

About a month before he resigned as AD in April of 2001, Frederick encouraged the athletic board to reject moving the Kansas-Missouri football game to Arrowhead Stadium and to scrap a donor-seating plan for Allen Fieldhouse.

Those two decisions were either his biggest mistakes or the greatest accomplishments of his tenure. Whatever, they are shining examples of his legacy.

Well, you know what happened to KU athletics after he resigned. The almighty dollar inevitably took over.

I never heard Freddy complain about it, though, and, to tell the truth, I would have been surprised if he did.

A great man. I had a class in Robinson and would always run into him. Even though I wasnt an athlete or a sports management major, he would always take the time to stop and ask how I was doing. I will never forget his kindness. He truly cared for people and for KU.

Nice Chuck. You can't just write a nice article about an ambassador for KU and someone who did a hell of a lot in his life for the university. I don't think this would be the appropriate place to put in a pot shot to the athletic department, do you? Classy...

I agree that Freddy's beliefs cost him his job. He was a throwback to the good olld dsays of KU Athletice. These days are long gone!