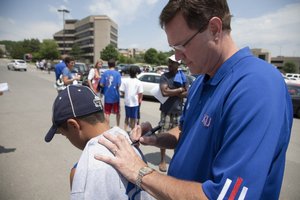 Several former Jayhawks returned to Lawrence to face off against members of the current KU squad.

Billy Thomas saw no need to talk any trash — or even pump his fist — during a remarkable 33-point explosion that carried Kansas University’s alumni team to a 67-52 victory over the current Jayhawks on Wednesday at Horejsi Center.

“I don’t do that. I am from the old school. That’s one of the things coach (Roy) Williams taught us, to not allow that (taunting),” 33-year-old former KU guard Thomas said.

“At the same time, you get a little smirk and it’s, ‘You know what I’m thinking,’’’ Thomas added.

You know what KU’s current players were thinking during Thomas’ scoring spree?

Something like: Why isn’t this guy in the NBA?

“He made every shot he took. It’s tough to win when he’s doing that,” KU senior Sherron Collins said. “We (current players) were a little sluggish. We’re not in tip-top shape. I’ve got to get in better shape than I am. We just got back (to town) a few days ago, and we’re still trying to find our game. We’re a little rusty.

“Billy Thomas looks like he’s been in the gym a lot,” added Collins, who plans to shed a few pounds before trying out for USA Basketball’s World University Games team June 16 to 24 in Colorado Springs, Colo.

“Oh my gosh, he can shoot it from so far. It’s like you can’t even contest that,” said Morris, who hit three of four threes en route to a team-leading 11 points. “Anybody who can shoot that well from deep should be in the NBA. He’s quick, too, real quick,” Morris added of Thomas, who led the Colorado 14ers to the NBA Developmental League title last year.

Russell Robinson, who played for Reno of the D-League last year, scored 17 points off 5-of-9 shooting including four of seven from three. He revealed he’ll be playing summer-league ball for the Orlando Magic.

“I’m shooting a lot better now after a lot of practice over the year getting my stroke together,” former KU point guard Robinson said. “It felt good to compete today.”

The only other alumni to score were Christian Moody (10 points) and Sasha Kaun (seven). Collins and newcomer Thomas Robinson scored eight apiece for the current KU team.

The game was all about one man — Billy Thomas.

“What I try to prove to these guys is it takes hard work to even get there,” he said of the NBA, where he has had short stints with three teams. “I want to pass along you can take no days off, that it’s going to be tough. They are going against me, they could be going against Chris Paul, Kobe Bryant in the league. Those are the guys they’ll have to face when they get there. I want them to understand how tough it is and how much work it’s going to take.”

“We’ve been in the weightroom faithfully, trying to get our bodies right,” Markieff said.

“Travis will be fine. He’s had an allergic reaction to something. We’re trying to be cautious and not let him do too much until he’s back 100 percent,” KU coach Self said.

Releford said blood tests have shown no cause of the skin irritation. “It’s like a tingling, stabbing (sensation) when I rub up against anything. I’m taking some different medication,” he said, indicating he hopes to be back on the court as soon as possible.

• Newcomers: Xavier Henry and Elijah Johnson are two newcomers who should be in town by the end of the week, Self said. Newcomer Thomas Robinson had eight points off 4-of-7 shooting with five rebounds. Arizona transfer Jeff Withey had three points, three rebounds and two steals.

• Fundraiser tonight: Several former KU players, including Thomas, Kaun, Robinson, Darnell Jackson and Wayne Simien, will compete in a scrimmage at 7 tonight at Free State High. It’s a fundraiser for the family of former Lawrence youth minister Brandon White, who recently died after a bout with cancer. Tickets are $5.