Frustrated Iowa State forward Craig Brackins walks back on defense late in the second half, Wednesday, Feb. 18, 2009 at Allen Fieldhouse. 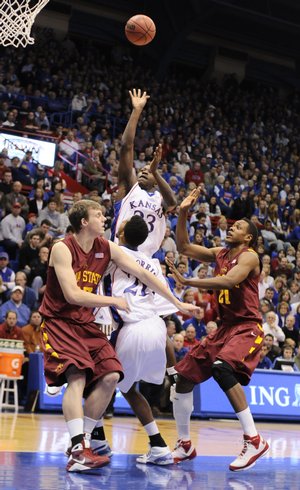 Wednesday, Brackins still managed 20 points — right on his season average — to go with 11 rebounds, but the sophomore hit just seven of 21 field goals and struggled to find his rhythm, hitting the side of the backboard twice and airballing two more attempts.

Kansas was ready for him this time.

“They were definitely more physical than last game,” said Brackins, who faced particularly tough defense from KU forward Marcus Morris in the post. “They were bumping me on screens and on shots. I tried to fight through, and it got me frustrated, and I just couldn’t hit a shot today.”

ISU coach Greg McDermott wasn’t surprised to see the Jayhawks’ revamped game plan, which included waves of double teams sent Brackins’ way when he touched the ball in the post. On one occasion, Brackins airballed a fadeaway jumper while facing a triple-team.

“I assumed that’s what they were going to do,” McDermott said. “They ran at him with a couple different guys in different positions on the floor. Early in the game, Craig handled it, and we missed shots from the perimeter. They have to make a decision if those shots go down early as to whether they’re going to stay committed to that, and we didn’t make enough shots early to make them do anything different.”

Brackins might have struggled, but his teammates didn’t do him any favors early on, either.

In the second half, the Cyclones made a run at the Jayhawks thanks in part to ISU forward Jamie Vanderbeken’s three-point barrage. As the beneficiary of Brackins’ double-teams, Vanderbeken slithered loose on the perimeter to bury five three-pointers off the bench and score a career-high 15 points.

“We want Craig to take those shots,” Vanderbeken said. “He’s our player. We want our offense to go through him. He didn’t shoot as well as he normally has, but it’s still Craig. He’s still one of the best there is, so we’re going to support him on off-shooting days.”

Brackins hit a critical jumper to cut the score to 43-38 with 12:33 left and force Kansas to take a timeout.

But minutes later, the deficit had slipped back into double digits.

“I felt we were trying to get as aggressive as them, and every now and then there was a touch foul,” Brackins said. “You get a little frustrated when they’re down and aggressive crazy bulldogs coming at us. We try to fight back with them and it’s little touch fouls. That’s frustrating.”

I find it amusing that brackins made mention of "touch fouls" when the officials made some HORRIFIC calls going against us throughout the game....interesting

Yeah, typical Iowa State loser talk. We beat you because of touch fouls Craig, is that how we have won the last eight in a row against you?

I will admit both Morris twins are playing better......however, I do feel that they get hosed on calls sometimes because of their reputation. We all know they are not great defenders, but I have seen a lot of improvement, especially from Marcus. The refs called at least 2 or 3 fouls when both Morris' were guarding Brackins in the post. They are bodying him up and it didn't seem they were using their hands at all. Those are ticky tack fouls to me.

Case and point.......Brackins is the last person who should be whining. He gets a TON of calls. How many times did he visit the free throw line in Aimes? KU is a better team and he knows it. The refs did not and would not have changed the result of the game.

20 points and 11 boards equals a "terrible" game? There was one stretch in that game where he almost single handedly brought them back and he scored from all over the court. He's a great player. In the case of this article's title, terrible equals "hyperbole".

I agree, Kranny, but it was a quote from the perpetrator, so to speak.

Nevertheless, Brackins is indeed a great player who was just down on himself for performing at a level less than he believed possible-ticky tack fouls aside.