Pittsburgh Steelers center and former kansas university football player justin hartwig, right, celebrates with coach Mike Tomlin after their 27-23 Super Bowl victory over the Arizona Cardinals on Feb. 1 in Tampa, Fla. Hartwig, who played center for Kansas from 1998-2001, was relieved that his holding penalty in the end zone didn’t cost Pittsburgh a championship. 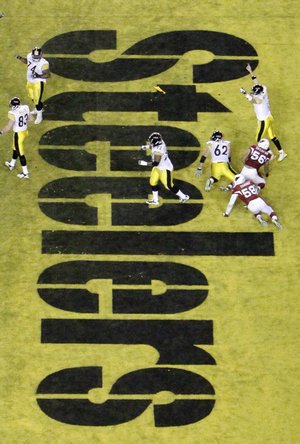 A flag flies in the end zone after Pittsburgh Steelers center Justin Hartwig (62) is called for holding during the fourth quarter of the Super Bowl on Feb. 1 in Tampa, Fla. Luckily for Hartwig, an ex-Kansas University center, it didn’t cost the Steelers the game. Pittsburgh went on to defeat Arizona, 27-23.

For a few minutes two Sundays ago, it looked like the goat of Super Bowl XLIII would be Kansas University alum Justin Hartwig.

With 2:58 remaining in a game his Pittsburgh Steelers were leading 20-14, Hartwig, the team’s starting center, was flagged for a holding penalty in the Steelers’ end zone, resulting in a safety that paved the way for a quick Arizona Cardinals touchdown drive that put Pittsburgh in a 23-20 hole with 2:37 to play.

“I was definitely in a state of shock,” said Hartwig, who claims to have been “miffed” at the call. “At that point, I was just hoping I wasn’t going to be the guy to have the play that lost the game.”

Luckily for the seven-year NFL veteran, he wasn’t.

Pittsburgh quarterback Ben Roethlisberger moved the ball steadily upfield, with the help of a stout offensive line, and Santonio Holmes smuggled a touchdown pass out of the air in the game’s final moments, ensuring Hartwig — after a Kansas career in which his teams went a combined 16-29 — a spot at the top of the sports world.

“It was totally surreal,” said Hartwig, who was vacationing in Hawaii last week after Pittsburgh’s 27-23 win. “I’ve never really won anything like this. I had family and friends there, I was just plucking people out of the stands and bringing them down. I was definitely one of the last people to leave the field.”

If Hartwig’s postgame celebration stretched a little longer than his teammates’, you’ll have to forgive him — success hasn’t always come easily for the West Des Moines, Iowa, native.

From 1998-2001, he played on some of the worst Kansas teams of the past decade, during a time when Big 12 North titles and Orange Bowl invites were too heavy to fathom. In his five years with the program, including a red-shirt season in 1997, the Jayhawks never made it to the postseason, never finished with a winning record and won just 10 Big 12 games in 40 chances.

Hartwig was able to distinguish himself a bit as an offensive tackle, earning honorable mention all-Big 12 honors as a junior and second-team honors as a senior.

But the team, for reasons unbeknownst to Hartwig, couldn’t put it together on Saturday afternoons.

“Despite our record, we worked really hard,” Hartwig said. “The fans might not have always been able to see that on the field, but we put everything we had into winning football games, and I do look back with pride about how hard we worked.”

After being selected in the sixth round of the 2002 draft by the Tennessee Titans, his fortunes took a sharp turn for the better. The Titans finished 11-5 and 12-4, respectively, in Hartwig’s first two seasons, and after a couple mediocre years with the Carolina Panthers, he signed with the Steelers prior to the 2008 season and promptly won the starting center job.

In the meantime, his alma mater — after back-to-back bowl victories and 20 total wins in the past two seasons under coach Mark Mangino — has established itself as a player in the Big 12 North.

Of course, being associated with the Steelers hasn’t been too bad, either.

Asked about the celebration after the Steelers won an NFL-record sixth Super Bowl, Hartwig said: “I think we partied for three straight days.”