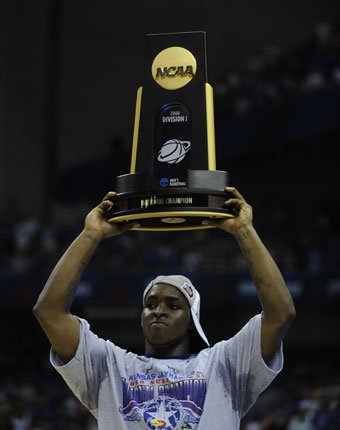 Kansas' Sherron Collins hoists the trophy on Monday, April 7, 2008 at the Alamodome in San Antonio, Texas.

“Knowing Speaker O’Neal is a Jayhawk and strong supporter of KU, Provost (Richard) Lariviere offered to let him display the trophy in his office,” said KU spokesman Jack Martin.

“We thought it would be a nice way to lighten things up for the basketball fans in the Statehouse, given the very difficult decisions legislators are having to make on the budget,” Martin added.

The provost took the trophy to O’Neal’s office on Wednesday, the day lawmakers started their wrap-up session, facing a $328 million budget deficit and proposing to make further cuts to education, health and social services.

The trophy is expected to stay in O’Neal’s office behind the House chamber through May 13, Martin said.

In other news...a van with Memphis plates is seen speeding away from Topeka with what looks to be a trophy in the rear window.

This is so stupid. The provost is leaving KU this summer and displaying our trophy at the legislator's office isn't going to help anything. The trophy is an artifact of Kansas lore, not a novelty prize to loan out to politicians. They should just be content to watch the highlights on youtube like the rest of us... or actually do their job to fix the budget instead of wasting time with crap like this.

They should have gone with the Orange Bowl trophy. Vibrant and the citrus smell might serve as a swift kick in the pants. Get crackin'!

I would like to schedule some time to have the trophy in my office. Our economy has been through a lot and it would really make me feel better to rub my teams national championship trophy in the face of all the Mizery fans her at work :)

Everyone in my company has had to endure a 20% pay cut. Send that puppy over my way for a little morale booster.

Keep the trophy where it means something to people and not the dam house because of the budget problems. If its going to a house then it needs to go to the Allen Field house center court.

That is one of the few things I don't miss about living in the Kansas City area - the Mizery fans >:-(

I would certainly love to have the NC trophy in my office. I do have a framed piece of Naismith Court on the wall. I think they would go well together. Add my name to the borrow list.

Well, the museum is closed during the AFH renovations until the fall ...

This does seem really, really weird ... but I'm gonna guess if anything happens to it, this joker will get a visit from Big Poppa Lew and a baseball bat.

Thanks for the info, sven!

Big Poppa Lew might fit said individual with some cement shoes to help him sleep with the fishes better...

sevenyearhawk noted it correctly. The Fieldhouse and Booth Hall are closed down for the near future. It would just collect dust during the next few months with no one getting to see it, so sending it down the road for a month isn't a big deal. If it isn't secure in the House Speaker's office, I don't know where it would be safe.

I'm really surprised the money gatherers in the athletic department haven't run with this idea while the hall is closed. They could be bringing in some nice extra cash having people bid to host the trophy for a day (with a lower level athletic rep accompanying it to keep an eye on it and a hefty penalty if someone did damage it while it was out) since it isn't on public display right now. Almost like the Stanley Cup getting to go with each member of the winning organization for a day.

i think it was a message . . . "your looking to make budget cuts? well i will be sending you a little reminder of why ku will not be on that list. best of luck! what if they cut a hole in the middle of the court and put down a clear plate of plexiglass and put our nc trophies in the jayhawks heart!

Quote from the Lexington Herald Leader,

"According to an unnamed source rumored to be a guy in a parking garage who took a chicken sandwich for this interview going only by 'Deep Wes', UK head Basketball Coach John Calipari, after spending half of his 30 million dollar contract on an undisclosed eBay item, and after renting a Wildkitty RV, will take a tour of the eastern side of the United States, visiting recruits."

NOTE: this quote was for entertainment only . The above quote was never said, and probably never even thought.

In related news, I heard Kansas State University will be lending their Blue Ribbon award trophy for winning the collegiate national hog contest in late May.

not_important, I like your idea. Anything to bring in extra money to the KU athletic coffers. As far as letting it stay in the House Speaker's office because of the "difficult decisions" he has to make, all I can say is, poor baby. Somehow I think all the people whose lives will be drastically affected by the cuts in education, health and social services would be in much more dire need of a pick-me-up than some legislator who doesn't have to give up anything.

I see that others agreed with me and TaTown's comment was removed. But let's be fair: perhaps he's not just a homophobic idiot, perhaps he's 8 years old and hasn't learned any better.

Oh, jeez, don't give them the trophy! They will sell anything to try to balance the budget in this depression.

} Jaybate's most recent post was only 2 lines of copy

At least the trophy wasn't lent to the Wichita legislature that tried to cut KU funding because he didn't like sexuality being discussed in the classroom. What was his name again?

Any strategy KU can do to ensure the power-brokers in Topeka realize how important KU is to the state, I'm all for it. However, if ONeal soon leads the charge to cut higher education funding for KU (and all schools, really), then we should rip that trophy back to Lawrence as fast as we can and get Coach Self to help campaign against the guy running against him in the next cycle.

That was for Jim Carroll and Andy Warhola. :-)

It's actually really smart. Put a symbol of KU's successes in front of the guys who will be voting whether or not (or more likely, how much) to cut the University's budget. Very subtle.

To do my part for the University, I promise only to buy my 2010 National Championship gear from the Burge Union.

It's probably safe now that Kathleen is in DC. Prior to that, I'd have demanded armed guards on both side of the trophy 24/7.

KUbsee69... that's all fine and dandy, except that the Kansas Legislature votes on funding for Kansas universities, not DC. Even then, she heads up Health and Human Services, which has very little lobby power for education funding.

Hope the speaker spares us the dull edge of the budget knife this year.

What are you talking about? My post has nothing to do with funding. I just meant she'd steal it.

Um, can I have it to display in my office? I only need to borrow it for a week, just so I can impress a few clients...

Fair enough, TaTown. What can I say, I was raised by a civil rights leader and anything that smacks of prejudice or injustice really gets my hackles up.