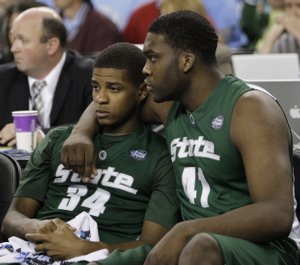 Detroit — Warm and fuzzy they were not.

For a year, maybe more, North Carolina could feel this national championship coming.

It was a calculated march, and behind the unrelenting play of Tyler Hansbrough, Wayne Ellington and Ty Lawson, the Tar Heels stomped out Michigan State’s inspirational run Monday night with an 89-72 blowout that wasn’t that close.

“I felt like it was fitting for us to do what this group just accomplished,” coach Roy Williams said.

Hansbrough scored 18 points, Ellington had 19 and Lawson led all scorers with 21 and also had a record eight steals. Now, they and Danny Green can all head to the NBA feeling good about their decision to return to school. They’re bringing home Carolina’s fifth championship, and the second for Williams.

All those upperclassmen, save Hansbrough, came back in part because their draft prospects didn’t look so good. They also didn’t want their college careers to end on last year’s embarrassing loss to Kansas University in the Final Four. That was a dud of a game in which they trailed, 40-12, in the first half and Billy Packer was telling CBS viewers it was over.

This time, North Carolina led, 36-13, around the time “Dancing With The Stars” was starting on another network. At least nobody knew how that one was going to end.

This game, though, was a slam dunk. Ellington got choked up as he basked in the confetti. Williams gave a shout-out to his mentor, Dean Smith, and he almost started crying, too. Hansbrough was the first to grab one of those “National Champion” T-shirts. Nobody worked harder for it than him.

“Sounds like I made a pretty good decision,” Hansbrough said. “Nothing beats this feeling right here.”

Likewise, it can’t feel much worse for the Spartans (31-7). They never had a chance. They had been on an uplifting run, and the final chapter was supposed to be the national championship. It would, the storybook said, bring the definitive ray of sunshine to a city and state that’s been battered by an ailing economy.

Instead, the 90-mile ride home to East Lansing will be a quiet one.

“You’ve got six NBA players that could be drafted in the first round or early second,” Spartans guard Travis Walton said. “You’re looking at a team that could probably beat the worst team in the NBA.”

The Tar Heels (34-4) were up, 55-34, at halftime, breaking a 42-year-old title-game record for biggest lead at the break and setting the mark for most points at the half.

By then, Lawson had already set an NCAA title-game record with seven steals.

“When you play North Carolina, there’s nothing you can do,” Michigan State coach Tom Izzo said. “Lawson says it all. He does stir the drink.”

This collection of NBA talent was too much from wire to wire, from the start of the tournament, to the very end.

Carolina won every game by double digits, something that hasn’t happened since Duke did it in 2001.

Lots of basketball fans saw this coming, including America’s No. 1 Hoopster-in-Chief.

Yes, President Barack Obama picked the Tar Heels to take it all in his much-publicized bracket.

From there, it was pretty much all “Showtime,” all the time — but not for Michigan State. Heck, Magic didn’t even stick around for the end. He was spotted walking up the tunnel with 3 1/2 minutes left.

Izzo tried to call a timeout to stop the onslaught with 6:45 left in the first half. His team came out and promptly turned it over — one of 14 in the first half, compared to only 12 baskets.

Goran Suton led the Spartans with 17 points, and Kalin Lucas, the Big Ten player of the year, had 14 — most scored once the game was out of hand, which was very early in this one.

Michigan State pulled within 13 a couple times late in the second half, and the crowd of 72,922 — mostly pulling for the Spartans — tried to make some noise.

But for most of the game, cavernous Ford Field had the atmosphere of a Lions game, save the few thousand Tar Heel fans whose Carolina Blue team put in a much better blue-collar effort than the team that was supposed to pride itself on that.

“I just don’t think we did the things we did all year,” Izzo said. “When you say that, you take away some credit from North Carolina, and I don’t want to do that. It was a combination of us and them, but we need to take some of the blame.”

As for that 98-63 beatdown Carolina put on Michigan State in this same building back on Dec. 3? No fluke. In fact, Detroit might want to give Ford Field a nice, long break. The winless Lions went 0-8 here last season, and there was no halt to the Motor City’s misery on this night.

It was, almost literally, over before it began. Ellington had a double-pump scoop layup and a 3-pointer and Hansbrough spotted up and sank a 14-foot jumper — all in the first 4:25 to put Carolina ahead 17-7. It never got closer.

The Spartans, meanwhile, were having trouble simply getting the ball in after Tar Heel buckets, turning it over that way twice in the first 6 minutes, part of a depressing day that didn’t do justice to the effort they put in to get here.

During pregame introductions, Williams walked over to shake hands with Izzo, who was distracted, drawing up a play on the greaseboard in the huddle. He jokingly showed the diagram to Williams — and you know what: It probably wouldn’t have mattered.

Izzo conceded in the lead-up to the game that if both teams played their best, Michigan State would lose. He’ll never find out if he was right because, while North Carolina was more than ready, the Spartans never showed up.

This title came four years after his first championship — and for the first time, with a roster full of his own recruits.

“Roy Williams is not that good,” Williams said. “But boy, ol’ Roy’s got some big-time players. That’s what it takes.”

Hansbrough was the only one who knew he wanted to come back from the get-go. He simply loves college, and though his senior season wasn’t quite as good as the year before, the ending was much better. Nobody on Michigan State could stop him — no shame there — and he had seven rebounds and two assists to go with the 18 points.

“I desperately wanted this championship for that young man,” Williams said. “I know it’s corny, but that’s who I am.”

Lawson was often criticized for not looking to shoot enough, and he sort of went back to his roots in this one. He finished only 3-for-10 from the floor but was a dominating presence, with six assists and a whopping 18 trips to the free-throw line.

Oh, and don’t forget Ed Davis. We’ll be seeing the 6-10 freshman in the pros with these other guys someday soon. He went 5-for-7 for 11 points with eight rebounds in 14 minutes and may have proven all he needs to, as well.

Overall, North Carolina dominated every matchup on the floor in pretty much every way. The Tar Heels were a unanimous No. 1 in the preseason and became the first UNC team to start and finish at No. 1 since 1982.

Michael Jordan was the star of that team.

There may not be any Jordans on this team, but there were plenty of Hansbroughs and Lawsons and Ellingtons — more than enough to finish off a project that seemed destined to end the way it did: On a ladder in Detroit, with scissors and twine in their hands.