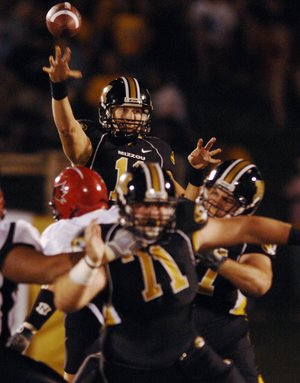 Gabbert got the nod during No. 6 Missouri's 52-3 thumping of Southeast Missouri on Saturday. The decision fulfilled Gabbert's wish to play as a freshman, but means the highly regarded quarterback can't be redshirted and be eligible for four full seasons after Daniel graduates.

Daniel had already thrown three touchdown passes against the Redhawks, then took time to help calm the nerves of the eager freshman when he was called upon.

"He said he remembered throwing his first pass 100 miles an hour, but told me just to relax," Gabbert said. "I had confidence after that and I knew I would be fine out there, so it helped me prepare."

Daniel could tell Gabbert was nervous.

"He had this really wide-eyed look on his face when we told him he was going in," Daniel said.

Gabbert and senior backup Chase Patton split snaps in the second half. Each led the Tigers on extended offensive series with Patton leading the lone touchdown drive of the second half.

Gabbert was 3-for-8 for 27 yards. He was impressive on his feet, including a 30-yard run after being flushed out of the pocket. His effort in front of 62,000 fans drew high marks from Daniel and coach Gary Pinkel.

"Anytime you go from high school to being in front of that many people, it's quite an experience," Pinkel said. "He had some adversity but he is a good athlete and player and a lot of times those experiences help you grow."

Daniel said, "I think he managed the game well and made some plays on his feet and with his arm. His stats don't pop out but he is going to continue to get better."

A little rust was to be expected. Gabbert, out of Parkway West High School in suburban St. Louis, hadn't played in more than a year. After throwing for 1,523 yards and 20 touchdowns his junior year, an injured shoulder kept him off the field for most of last season.

"Sunday morning I woke up and had the soreness of playing football, which is a good feeling," Gabbert said. "That's when it had soaked in and I realized I was playing college football."

Gabbert was considered one of the nation's top quarterback prospects out of high school. He originally committed to Nebraska before deciding to stay in his home state.

Daniel, too, did not redshirt, and said the experience was worthwhile. He arrived at Missouri as the backup to Brad Smith. During his freshman year, Pinkel was able to work Daniel into several games.

Daniel sees the mentoring opportunity as a positive for the young quarterback.

"It was very helpful, not only from the aspect of playing every week but from planning and knowing what to do to be a good quarterback," Daniel said. "Blaine gets a look at what me and Chase Patton do every week to prepare for a game."