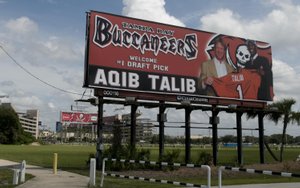 A welcoming billboard off the side of the road near Raymond James Stadium pictures Aqib Talib posing with Buccaneers head coach Jon Gruden after he was selected with the team's first round pick in the NFL draft.

Tampa, Fla. — It's Thursday morning inside the posh locker room at the Tampa Bay Buccaneers practice facility, across the street from Raymond James Stadium, not far from a giant billboard picturing Aqib Talib and coach Jon Gruden, both smiling.

Talib is standing in front of his locker, conducting a one-on-one interview, and is asked about when Gruden wasn't smiling, thanks to the rookie chosen with the 20th selection of the first round.

Talib got into a skirmish with Tampa Bay seventh-round choice Cory Byrd at the rookie symposium, but that wasn't the main source of his getting on the wrong side of Gruden. Repeated tardiness was the issue, and Gruden went public with his disappointment.

"I got punished for it," Talib said Thursday. "It's life. I've been late at Kansas before. Other guys have been late for the bus, so, I mean, it's not like it's the first time it's ever occurred in life."

Will it happen again?

Talib's response revealed his independent spirit, not always appreciated in a sport that demands following orders, his sense of humor and supreme self-confidence, which comes in handy playing the position he plays. There is no room for fear in the life of an NFL cornerback, not even fear of authority.

Talib always has been better about adhering to wide receivers than to rules, and when it comes to football, he always has been an attentive student, when he shows up on time. He earned the starting nickel-cornerback position in training camp and is on the field about half of the defensive snaps. Veterans Ronde Barber and Phillip Buchanon start at corner. Talib also starts on the punt, punt-return and kickoff units.

Talib signed a five-year, $14 million contract. When he opened the receipt for his first direct-deposit paycheck, he said, "It definitely opened my eyes and told me I was in the NFL when I saw the total."

Other than scholarship checks and Pell Grant checks, Talib said his last one came in high school, when he worked three weeks at "Braum's Ice Cream for about three weeks. ... I just needed a job real quick to get some school clothes."

This one had more zeroes.

Surely, he bought something to commemorate the first paycheck. You know, maybe a wrist watch or new dress shirt.

Ashamed at my ignorance, I nodded as if I knew that 22s were fancy tire rims, which of course I didn't know until asking the two 20-somethings making their first road trip covering Kansas football for the company.

I asked Talib if he had a vanity license plate, something along the lines of "Aqib25." He laughed and said he didn't.

Talib said he plans to be on the KU sideline tonight at his new home stadium, where South Florida plays host to Kansas.

Talib's father, Theodore Henry, lives with him and plans to be in the stands tonight. Talib's mother, Okolo Talib, and brother are coming in from Texas for the KU game and for the Bucs' Sunday home game against the Atlanta Falcons.

He smiled when asked about the billboard outside the stadium.

Next on his agenda: Book end the weekend by showing them a couple of victories at Raymond James Stadium, the first for the visitors, the next for the home team.

what happened to "kream keegan?"

I look forward to espn2 showing him on the sideline tomorrow night. That'll be great pub for the football program.

I wish he could suit up for us. Its nice though that he will be out there supporting the team.

This is great! Jayhawks that make it to the NFL are proud of their team and will be there on the sidelines supporting them. The culture is changing everyone... enjoy the ride!!!

I have to go to a wedding tonight. The wedding starts at 6:30. The reception is right around the corner from my brothers house so I'm getting the hell out of there as fast as possible.I won 'Kream Keegan' on the week we beat Nebraska for the first time in my lifetime. I'm still waiting for my prize.

Awesome story! That Talib billboard not only sends a message to our recruits and team ... But also to the opponent and Bulls fans - what this program has accomplished in his development and that Kansas should not be taken lightly ... BEAK 'EM HAWKS!!

It should be noted that Talib is still learning in the NFL.On his first play from scrimmage inhis first regular NFL game, he in as a nickel back and got toasted on a 39 yard where his man ran right past him for a TD on the 3rd play from scrimmage of the game.This play put the Bucs down immediately and they never recovered. You could say it was a (if not the) defining moment of the game!WELCOME TO THE REAL NFL ROOK YOU GOT A LOT TO LEARN!