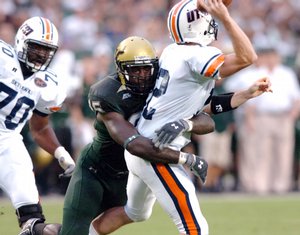 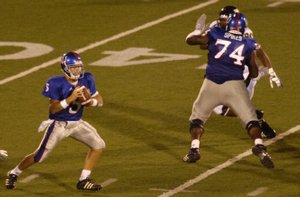 Since Jeff Spikes, Kansas University's red-shirt freshman offensive lineman, is currently preparing for the biggest challenge of his collegiate career, now would probably not be the best time to bring to his attention the following pieces of information about South Florida defensive end George Selvie, the man he will be charged with blocking come Friday:

2. He is part of a USF awards promotion campaign touting him, with seemingly good reason, as the "The Baddest Man In College Football."

3. When Selvie was an infant, a Buick rolled off a car jack and onto his head. The accident, according to the South Florida media guide, left a dent in his noggin' that remains to this day, but did not seem to affect him in any other way.

Despite the aforementioned snippets, however, Kansas coach Mark Mangino does not seem overly concerned with Spikes' ability to stop the freight train that is George Selvie.

"Jeff Spikes will be fine," assured Kansas coach Mark Mangino, who may or may not be aware of the specifics of the Buick incident. "I'm not worried about Jeff at all. He's a competitor. He's a tough kid, he's a talented athlete. And Jeff is not going to back down from anybody."

Which is good if you happen to be a fan of the Kansas football team, because perhaps no matchup Friday will be more important than the one between Selvie and Spikes.

It is no secret that more than a little success quarterback Todd Reesing enjoyed last season can be attributed to the play of all-American left tackle Anthony Collins, who provided ample time - and then a little more - for Reesing to maneuver in the pocket.

With Collins out of the picture, off to what figures to be a successful career as an offensive lineman in the NFL, the task of protecting Reesing's blindside has been placed into the hands of Spikes, a 6-foot-6, 314-pound behemoth from Painesville, Ohio.

And never will that blindside be more in need of protecting than during Friday night's 7 p.m. game at Tampa's Raymond James Stadium.

Selvie headlines a defense that currently ranks first in the nation in total defense - the Bulls have given up an average of just 161.5 yards of offense per game in '08 - and enters this week's game having intercepted a pass in 13 of their last 15 games.

On Wednesday, Reesing - ever the consummate teammate - offered a vote of confidence in the youngster, two days before the Jayhawks were scheduled to play in their biggest game of the new season.

"Absolutely," said Reesing, asked whether he "I believe he can do it. I mean, Selvie's a great player, one of the best in the nation, so it's not going to be easy. But I know Jeff is going to go out there and work hard."

Now, though, comes the real test.

Although Selvie hasn't gotten off to a terrific start this season - he has yet to record a sack in two games - there is no denying the fact that he is a player Kansas cannot afford to ignore. He is a player many believe to be the best defensive end in college football, and a player who, as a junior last season, described his childhood trauma to the St. Petersburg Times this way: "I was 1 year old, outside playing. The car was on the jack, and my little cousin got in there. It fell on top of my head. That's about it."

"I've heard things from other teammates," said Spikes of Selvie. "Just the common things that you'll hear. But other than just studying him, and specifically saying 'This is my opponent, and this is what I'm going to go against,' I just study myself and try to do the best I can do in making myself better."

What about the hype on Spikes? He's played two games.Coach W can do some things to help him out like double teaming or chipping with Bier.And if that doesn't work and Spikes really gets abused, I wouldn't be surprised to see Ian Wolfe his shot.

If Tennessee-Martin and UCF can keep Selvie from their QB, I'm sure we'll be fine. He'll probably get a couple of sacks, but that's football. As long as our defense plays up to its abilities, I think KU can get a win in Tampa. USF hasn't seen an offense as dynamic as KU's, so I think it will be a shock to them in the first half. We need to jump to an early lead.

I would like to see coach doubling on Selvie or at least chipping to see what his capabilities are in the flow of the game. If it appears Spikes can handle his own, then fine let him go one on one. I would just hate to see this kid get loose around the corner one on one early and have a pretty free run at TR5.

Kirkwood......If there were a defensive coordinator known for stopping the spread don't you think EVERY team would have figured it out by now?And don't you think he would be working for a "big boy school" by now?Nobody has stopped it consistently....yet. The only thing that stops the spread.....is the spread itself.

Just goes to show that you just can't tell how players will develop. Selvie was recruited to USF as a Rivals two-star offensive lineman. Gotta give Coach Leavitt credit for moving him to the other side of the ball.I think our tight ends and running backs can help contain him enough to give Reesing time to get the bal to Meier or Patterson.

Or that Briscoe guy...I've heard he might be good.

The only thing that stops the spread is weak execution. Put a tackle and tight end on Selvie and we'll be fine. We need to put more pressure than usual on the QB. Worked against Va Tech, very similar offense, only with one QB that can run and pass.

Our offense may be dynamic, but their defensive coordinator is considered the defensive guru fro stopping the spread offense.

3 out of 5 CBS Sportsline 'experts' pick us to win...Rocky93,thanks for visiting. although i have to disagree with your assessment of the game, i respect your opinion -- much more insight than what the methzou dolts that usually troll this site come up with.this game will come down to how Angus Quigley and Jacques Crawford run the ball. I will be looking for clock-eating drives at the get-go and a couple big strikes to take the wind out of USF's sails -- then it's time for the D to take over. Grothe is a heckuva playmaker, but if we get them down early I think he's gonna try and do too much and force some passes for turnovers.KU 28 USF 21 -- I can't wait, may the best team (KU) win!

Gotta love all the coverage this game is getting. Many pieces from the ESPN staff too. Check the Big East and Big 12 blogs. Sorry to say that both bloggers are picking USF to win. Hawks love to play the underdog! Rock Chalk!

Greetings Hawkfans! This should be a good one.... I must point out that this game is THE non conference game in Tampa this season and there will be a very loud SEA of GREEN to contend with. Tampa has embraced the Bulls and it will be the lead story on every news outlet in Tampa Bay. If the excitement is on par with last year's WV game you will have problems.The QB dual will be awesome. Two "little" guys going head to head. I don't like Spikes chances against Selvie (Spikes too big - Selvie too quick) George has been double and tripple teamed on just about every play this season so, yes, he hasn't gotten a sack. Spikes will need help. But, you've got another Freshman on the right end that's going up against Sr Jarrett Buie and he brings a LOAD. I don't think the Bulls will have to load the box to bring pressure and that will only benefit the secondary.KU has a pretty sharp secondary too and Grothe is prone to INTs when he tries to force it. Hopefully the rushing game (which KU is weak against) will prevent too many errant passes. The Bull Pen has great depth in the backfield.I predict a very fun defensive slugfest. If the USF special teams can tow the line (which they haven't the past two weeks!!) USF will win by 10.USF 20 - KU 10

Rocky93 you are pretty optimistic. Not that I don't respect the Bulls, but predicting a 10 point performance from Reesing and this squad is BOLD. With Reesing, KU has never scored less than 19 points (twice, in conference road games) and they still managed to win those games. You just gave up 24 to Central Florida.We traditionally get a slow start against better teams, then Reesing and the offense start to figure you out. And I'm not worried about our run defense at all. We gave up a couple of busted plays, but you'll get nothing up the middle. Grothe is by far your biggest run threat to KU.Prediction: Jessie Hester gets an unsportsmanlike conduct call that changes the momentum, and Kansas takes full advantage.

USF is just too up and down a team. KU will have their hands full, if USF is up. Last week, USF looked rather tepid against UCF.It was a great game in Lawrence in 2006 and should be a similar type of game.KU 20 USF 17 (ot)

Their defensive Guru known for stopping the spread has never met our offensive guru Eddie War. Ku will win with a better offense and defense.

KU players: Every game is winnable for you this year! Take care of business tomorrow! We're shouting loud for you all over the world! Rock Chalk Jayhawk!

Craig James on espn, during the rutgers-unc game, just said "Mangino and the Jayhawks are right where they want to be, lying in the weeds, waiting to strike." I love it. The Hawks are gonna turn the bulls into steers