It's the annual advent of basketball season here in Lawrence. It was a highly-anticipated night as KU basketball fans stood in line for hours on end just to be part of 'Late Night in the Phog' - and of course their first glimpse of the National Champs.

Late Night in the Phog highlights 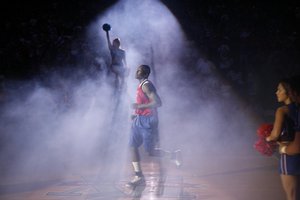 A trio of friends and Jayhawk basketball fans waited nearly seven hours Friday to witness this year's basketball team enter the Allen Fieldhouse court for the annual Late Night in the Phog tradition.

The Kansas University tradition kicks off the beginning of practice for the women's and men's basketball teams.

As thousands of people poured into the fieldhouse and filled seats, the friends headed straight to a roped-off corridor where they caught one of the first glimpses of the basketball team and coaching staff.

He caught a few signatures too, reminding him of the signatures he and his family got after the 1988 championship game.

"I actually waited since the last championship game for that," he said.

"The banner means so much to this university," said Brian Otte, 38, a 1992 KU graduate. "It's been so long since they've been to the Final Four even to consider winning a national championship. It's so exciting. I cannot wait to see that banner hanging in the stadium."

This year, players did themed dances for all the championship victories throughout the decades. KU's first basketball championship was in 1922.

Trevor Perry, 18, of Richmond, Va., was overwhelmed watching his first Late Night as a KU freshman. He'd only checked out YouTube videos to see what Late Night was all about before.

"It's definitely better to be here," he said.

Though fans were ecstatic about last season's national championship victory, their sights aren't necessarily set as high this season.

"I think we'll be rebuilding this year since we have so many new players," said Lori Schulter, 45. "I think it will be fun to watch them and watch the new players grow."

Brian Otte, are you the most spoiled fan in history, "its been so long since they've been to final four", it been four years, most schools are happy with one every ten years. And its not a stadium its a fieldhouse

Weird to see the new 3 point line on the floor