The Jayhawks improved to 5-1 on the season with Saturday's win over Colorado at Memorial Stadium. 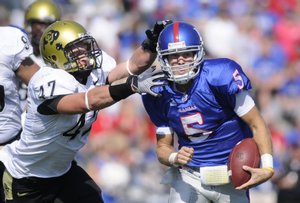 The guys (Tom Keegan, Jesse Newell) give their observations following KU's 30-14 victory over Colorado. They also look ahead to next week, when the Jayhawks will take on an angry group of Oklahoma Sooners.

For five weeks of its 2008 season, Kansas University's football team had worked tirelessly to assimilate running back Jake Sharp into the run-game scheme that had served the team so well over the past few years, a north-south, fairly straight-forward attack.

And for five weeks, members of the coaching staff discovered that Sharp - an undersized speedster who rushed for 821 yards as a backup last season -just didn't fit that system.

As coach Mark Mangino aptly put it, "You can't put a square peg in a round hole."

So Saturday, the Jayhawks altered the hole - and created a few, too - by tweaking their scheme in an effort to utilize Sharp's abilities better.

Turning away from a ground attack tailored toward past standouts Brandon McAnderson and Jon Cornish - running backs more comfortable pushing the ball up the middle - offensive coordinator Ed Warinner implemented a package designed for a running back like Sharp.

More runs to the outside. More option-based plays.

In short, more opportunities for Sharp to handle the ball in the open field, where his most valuable asset, speed, could be utilized.

"Some of the things in our offense that we used the last couple years ... suited those running backs," said Mangino, whose team extended its home winning streak to 13 games. "And we had such great success with it that we didn't want to abandon it. But we were forced to put some new looks in the run game, and do some things that play to Jake's strengths, and it's worked out so far."

Of the various notable developments to come from Saturday's game - a defense that played one of its most complete games of the season - none carried the buzz of Sharp's re-emergence as a viable backfield option.

Just four weeks after Mangino called Sharp a "complementary back" whose job it would be to spell primary rushers Jocques Crawford and Angus Quigley, the junior from Salina was the only running back to carry the football as the Jayhawks rushed for their highest total, 151 yards, of the season.

"I guess anybody who's ever doubted the fact that I (can) do that, there you go," Sharp said.

For the second straight game, it took Kansas a half to get things going. The Jayhawks fell behind late in the first quarter, but a Jake Laptad safety midway through the second quarter gave the Jayhawks a 9-7 lead going into halftime.

The teams traded touchdowns in the third quarter, first on a five-yard pass from Kansas quarterback Todd Reesing to receiver Dezmon Briscoe, then on a one-yard quarterback-keeper from Colorado's Cody Hawkins. But two fourth-quarter touchdowns from Sharp - on runs of seven and eight yards that came less than three minutes apart - helped Kansas pull away and move to 2-0 in the conference for the second straight season.

Despite questions about their recent defensive struggles, especially in the secondary, the Jayhawks held Colorado to just 196 yards of total offense, the second-lowest total of the season. Kansas grabbed two interceptions and forced a fumble, and, as Mangino said afterward, bailed out the special-teams units, which had its worst overall performance of the season.

"It was one of those things where we want to let our offense know that we're here, regardless," said senior safety Darrell Stuckey, who intercepted a Hawkins pass in the red zone with Kansas holding a narrow 9-7 lead in the second quarter. "And we'll get the ball in your hands as much as we can."

It didn't take long following Saturday's victory for focus to shift to the next land mine positioned on the Jayhawks' daunting 2008 schedule: a 2:30 p.m. matchup with No. 1 ranked (for now) Oklahoma on Saturday in Norman, Okla.

Minutes after players made their way into the interview room of the Anderson Family Football Complex for postgame interviews, they were being bombarded with questions about the Sooners, a foe the Jayhawks will take the field against for the first time since 2005. Players were instructed by coaches to keep quiet about the Sooners, and they did, shucking questions about their next game and opting to bask in the glow of their most recent victory.

At least one player, however, didn't mind glancing ahead.

Asked whether he can continue the type of production he's accounted for over the past two games, a smiling Sharp offered up an encouraging response heading into a three-game stretch that includes two top-10 teams and a despised rival in Kansas State.

When I saw who wrote this I almost never read it!! Still had bad taste of "duh man's" last article.....

....and then Missouri lost.

It was good to see a solid running attack for a change but I still think Quigley is our best back. I'd love to see him get 31 carries just to see how he does. Sharp and McAnderson were solid working together last year and I don't see why Quigley and Sharp couldn't be the same this year. We have got to find a way to get some early scores. Every game we can't seem to get started and the crowd ends up being unenthusiastic. Great game though and glad we came out with a big win. The day started off on a positive note, with KU winning, and ended on a positive note with the MU loss.

Nothing to lose at OU. I hope our team feels nice and relaxed, confident, agressive and no pressure and comes out being and doing who they are. They can beat OU. Since Mizzu will be losing again next week, I hope that our guys realize that they don't have to win just have fun and play with intensity. If it comes down to a duel of QB's, we win! So, no playing on the back of your heels. Expect to make the big play, take a risk that you would not ordinarily do (they won't expect it) and OU goes down!

Maybe we could pipe in fan support with people like me on the West Coast listening over the internet, we could do a VOIP for voice feedback and I could yell into my phone. I know what you mean. I used to go to KU and KSU games both and the difference is amazing. I think it is the type of people who go to KU who have a real peer dependence thing, afraid of being offensive. It is like watching drivers in Portland impatiently but politely (mostly) waiting on drivers cutting in and out where on the East Coast horns would be blaring, fists shaken, and a few choice words said. Kind of a sheep mentality. Need more Western Kansas fans.

WE GOT NOTHING TO LOSE JAYHAWSK!!!!THE PRESSURE IS ON THEM.GIVE 3 SECONDS TO REESING AND WE ARE IN THE GAME.

Rolo,It could be that Coach is simply more comfortable with the more experienced back, which is Sharp. That makes sense since the guy ran for over 800 yards last year. That's pretty good for a backup, so Coach tinkered! I think Coach understood how important it was to give the team confidence in the running game and thought Sharp was the most prepared to step up. Hey when you're 5 games into the season and you have to fix something, you need to try to make it a quick fix! If Quigley and Crawford can contribute, look for Coach to work them in more, maybe developing some sets that fit them!Yeah some of the Missery are on CBSsports crying in their cereal. So I added some fiber to their diet. (Chuckle)

Easy...Hey, reality bites. I like our team but it is not the best team in the country. I'm happy it no longer resembles a rec league team and can compete. I hope that we will see the day that it truly is the best team in the country. We were very close last year. Your attitude is sort of like having a chrome dome and saying see I have hair! So I look again and say, I'm sorry there is some on the side!I'm glad you stick up for our team, but why call people names when they are just giving their honest opinions? You are definitely correct we may not loose another game, I'll even go so far as to say we definitely won't loose another game, but we might lose one!

As a KU football fan who just graduated in May of 08' I am very displeased with the lack of crowd support we get from the Jayhawk faithful. It disappoints me to get to the game and feel I'm at a high scrimmage. I get sick a tired of people not getting loud for EVERY defensive play. Nevermind the students yelling obscenities, at least a section is cheering for something! There's a reason why we get the reputation of being basketball school and never a football school, or even both for that matter. Football teams thrive off of the crowd of which they call their home stadium and fans! Let's get LOUD and God forbid stand up on the non-student side for the whole game! Come'on Jayhawk faithful start yelling and I promise it will fun, and not to mention contagious!

the secondary may have been a little better this week, but they are still struggling. hawkins just isn't that good of a qb, which helped us. i think we will get absolutely lit up by great passers (mccoy, bradford, daniel, tech's qb). that's going to get ugly i think.

You pencil neck geeks are just as bad as some of these writers on this site. If you don't have anything good to say about the football team then shut up. We got the best team in the country. May not loose another game this year. Get your head up fools...