Kansas guard Brady Morningstar is fouled on the shot in the second half against Coppin State Friday, Nov. 28, 2008 at Allen Fieldhouse. Morningstar finished with a career-high 21 points and connected on six of eight three-point attempts.

The Jayhawks bounce back from the loss to Syracuse. 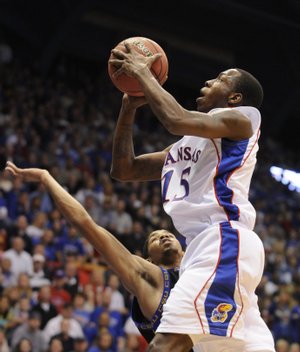 Bill Self delivered a simple, yet direct message to sophomore Brady Morningstar before Friday night’s nonconference clash against Coppin State.

“I told him I wanted him to shoot every time he was open,” said Self, Kansas University’s sixth-year coach.

Self had sensed some reluctance from Morningstar, a 6-foot-3 guard/forward who hit just one of five three-pointers in KU’s first four games.

“He did,” Self added, after Morningstar exploded for six makes in eight tries from beyond the arc on his way to scoring 21 points total in the Jayhawks’ 85-53 home rout of the Eagles.

“He and Tyrel (Reed) have to be guys who make shots. I told those guys, especially after the Syracuse game they have to step up and make shots. Tyrel made two (in eight tries) and Brady one (in one try in Tuesday’s loss to Syracuse). You will not win against the zone doing that, at least not often.”

Reed missed his only shot attempt — a two-pointer — against Coppin State after hitting two of eight threes versus Syracuse. Morningstar, however, fired away by hitting seven of nine shots overall en route to his career-high point total. He also had a career-best seven rebounds in 32 minutes.

“Brady was definitely the best performer in the game for us,” Self said, speaking on a night Cole Aldrich scored a career-high 23 points with 11 rebounds.

Morningstar was asked by three different reporters — arriving in different waves to interview the star of the game — if he could remember a game in which he’d hit six threes.

“Not to my recollection. Hopefully I did. Hopefully against Lawrence High,” the Free State High graduate cracked.

Morningstar, who entered the game with five baskets in 15 tries all season, tried to deflect the credit, especially to Sherron Collins. Collins had 11 points and eight assists.

“My teammates passed me the ball. I don’t know how many times Sherron passed it to me,” Morningstar said. “I’m glad my teammates were able to get me open looks and I was able to knock them down. Tonight I think I took a step forward.”

Morningstar hit his first four threes, while Tyshawn Taylor added eight points in helping KU race to a 31-5 lead with 7:55 left in the half. By intermission, Morningstar had 14 points off 4-of-6 three-point shooting.

“The reality is, if he had played that way against Syracuse, they would be ranked, and they would continue to be ranked,” he added of the (4-1) No. 22-rated Jayhawks, who might drop out of the polls next week after an OT loss to the Orange.

Morningstar’s three-point barrage came despite the fact he has been wearing a wrap on his right thumb lately.

“I got it hit at practice. It’s OK,” Morningstar said.

His performance was more than OK. Just seven other KU players have hit more threes in a game.

“I think he played great. Of course he shot it terrific,” Self said. “He’s a glue guy who can shoot.”

Aldrich actually was KU’s leading scorer after hitting eight of 11 shots and seven of seven free throws. He also had three assists and two turnovers in 28 minutes.

Self wasn’t happy with the big guy’s play, however, during an early stretch of the second half when Coppin cut KU’s 31-point lead to 17 (59-42). At that point, Self called a timeout and lit into his squad.

“I think the biggest reason I was upset the second half is we didn’t ever stop them,” he said. “The first 15 minutes we really guarded them (as CSU hit 22.2 percent the first half). We didn’t guard them. We weren’t intense. It’s not the way to play. Young kids should be so excited to be out there.

“Cole and Sherron contributed to that. Our leaders contributed to that. They’d be the first to tell you that. Cole had Markieff (Morris) wide-open on the high/low, and he throws it out of bounds by trying to make a pass we never practice. We lost our focus awhile. We are young. Guys are not used to carrying out assignments under pressure.”

KU closed the game in fine fashion and outscored Coppin, 44-36, the second half.

“A lot of good things happened tonight,” Self said. “I’m glad we won, but we need to be tougher. These guys need to step up and be tough.”

Gurley? (I remember him going off at NC State's old fieldhouse one year, mid-90s) Downtown Terry Brown? (I'd swear he hit 10 triples in one game in AFH) Kirk?

Haase had a couple games where he could have had 6 or 7.

Wait, Jaybate, are you saying that Self's 3 mil a year is an acceptable paycheck now? That wasn't what you were saying when the contract was rolled out......Cole picks up a double-double shooting 8 of 11 from the floor and 7 for 7 from the line while not playing a good game. Can't wait to see him at his best........Ryan Robertson could have had 7 at some point.

For KU to be successful game after game, Cole needs to be close to the basket on defense. Our opponents have realized that pushing Cole away from the basket, they can get easy baskets in the paint. He doe not get back in time to defend the pass inside.Part of Syracuse's strategy in the comeback was to set-up a screen on the perimeter and pull Cole away from the basket. Other players need to rotate to defend the screen and keep Cole in the paint.It happened again yesterday. On many instances, Cole was guarding 25 feet away from the basket and Coppin State was successful in getting easy baskets. Against good teams/coaches, this weakness of our basketball team will be exposed.His height and wingspan should be used more for our advantage in the paint (when defending the interior pass). He does not have horizontal quickness to be effective 25-30 feet away. His man is not going to make a basket from that far any way.

LAJayhawk,Self deserves his bones as much as any D1 basketball coach does. But society doesn't really need rich basketball coaches. As someone pointed out to me recently, basketball isn't brain surgery, folks.

jaybate-I completely understand your point, and I don't mean to be argumentative. However, I will say that society has a funny way of deciding on its own who should and should not be rich by how they (we) spend their (our) money. There is an avalanche of money flowing into the athletic department, a business unlike any other, and those who contribute the most to the business' success should be rewarded. Anyway, I know you understand this and there is no need to rehash old arguments.ralster-"I'm not sure even NeuroSurgeons make 3mil/yr..."--I'm pretty sure that was jaybate's point.

LAJayhawk,A gentlemen's disagreement is a thing of beauty.I see your points. You see mine.

well stated, LAJayhawk. it gets old listening to clowns like jaybate who run around talking about who should make what money. not sure what "points" he thought he was making other than he thinks he can decide who gets to make money and how much. clownwork, i say. you know what is not a "thing of beauty"? an idiot who says "society doesn't really need rich basketball coaches". thanks for being the end all decider on what society "needs", genius. lets see, a million dollar sports business decides it is worth it to them to pay a guy three mil to work for them. then this guy decides that taking this job for three mil is his best option. they agree on the contract. yeah, thats hard to understand. sadly they didn't call you in to get your approval, jaybate. sadly, what society really doesn't need is clownshoes running around talking about how certain people make too much money. mainly because they are jealous that these people are actually out there making things happen and being productive enough to garner the wages that somebody else decides to pay them for their services. next time i will tell lew to call you before drawing up a contract. and lastly, basketball might not be brain surgery but your "point" is hilarious. it basically voids your point really. if basketball is so simple and being a great coach was so easy, they would be able to pay someone 50 grand a year to do it because you could find so many people to be great basketball coaches you wouldn't have to offer someone 3 mil to do it. its called supply and demand, look into it.happy easter

wow, hawker! congratulations on missing the point. I sure hope you never need brain surgery. society (and your recent post) indicates that there are clearly more important things to pour our money and our minds into, like college basketball.

of course, with a communist city in your name, i wouldn't expect you to know too much about economics either, hawkin. worst part is i assume both of you went to college at kansas and STILL don't understand simple econ. sad, really.