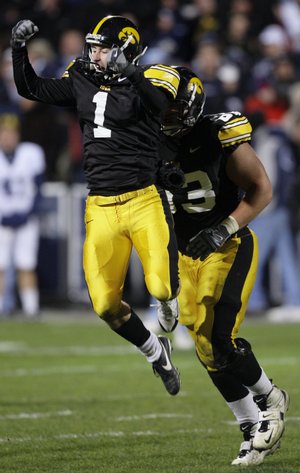 Iowa City, Iowa — Penn State is perfect no more, its hopes for giving coach Joe Paterno another national title given a sharp and surprising kick by Iowa.

Daniel Murray hit a 31-yard field goal with a second left and Iowa rallied to stun the Nittany Lions, 24-23, likely dashing Penn State's hopes for a spot in the BCS national title game.

Shonn Green rushed for 117 yards and two touchdowns, and Ricky Stanzi bounced back from an interception and a fumble to lead the Hawkeyes (6-4, 3-3 Big Ten) on their winning drive, which came after Daryll Clark threw an interception.

The Nittany Lions (9-1, 5-1) were third behind Alabama and Texas Tech in the most recent Bowl Championship Series standings, in danger of being squeezed out of the national title game even if they stayed unbeaten.

Nashville, Tenn. - Florida will get its shot at No. 1 Alabama.

The Gators made sure of that with plenty of time to look ahead to the Southeastern Conference championship game on Dec. 6 in Atlanta.

Tim Tebow threw for three touchdowns and ran for two more, and the No. 4 Gators routed Vanderbilt in clinching the SEC Eastern Division title for the second time in three years.

The Gators (8-1, 6-1) answered the question of whether they would have a letdown coming off their emotional 49-10 victory over Georgia by scoring on each of their first four possessions, Ahmad Black intercepted a pass and Carlos Dunlap got his hand on two punts in building a 28-0 lead in the first 18 minutes.

Los Angeles - Southern California put on another dominant display of bone-jarring defense Saturday night. It was a good thing, too, because the Trojans' offense didn't provide much support.

The Broncos (9-0, 5-0 Western Athletic Conference) rolled up 563 total yards and held the Aggies to 44 yards rushing and forced six turnovers.

The offense was sluggish at times in the first half, was just 5-of-12 on third downs and had three turnovers, the first setting up a TD that closed the gap to 28-7 and gave the Aggies (2-8, 2-4) momentum heading into halftime.

Evanston, Ill. - Terrelle Pryor threw for three scores and Chris "Beanie" Wells ran for two more, leading Ohio State over Northwestern that showed the Buckeyes are definitely over their loss to Penn State two weeks ago.

It was Ohio State's fourth victory in a row over Northwestern (7-3, 3-3), and it delighted the sellout crowd that appeared to be two-thirds Buckeyes fans.

More importantly, the victory kept the Buckeyes' chances for a fourth straight Big Ten title alive. Ohio State (8-2, 5-1) must win out and get help from Penn State and Michigan State, who play each other in the season finale.

Lexington, Ky. - Matthew Stafford threw for 376 yards, including the the go-ahead touchdown to A.J. Green with 1:54 remaining, to lift Georgia over Kentucky.

Knowshon Moreno ran for 123 yards and three scores and wide receiver Mohamed Massaquoi atoned for two fumbles by hauling in a career-high eight receptions for 191 yards and a touchdown as the Bulldogs (8-2, 5-2 Southeastern Conference) survived a major scare from the Wildcats (6-4, 2-4).

Freshman quarterback Randall Cobb ran for 82 yards and three scores for the Kentucky, but threw an interception to Georgia's DeMarcus Dobbs at the Georgia 13 with 46 seconds remaining and the Bulldogs escaped.

The Cougars (9-1, 5-1) went unbeaten at home for the third straight season and stayed alive in their quest for a third straight Mountain West Conference title.

BYU scored the first 27 points, then after two field goals by San Diego State, Hall found Collie for two more touchdowns early in the fourth quarter against the injury-plagued Aztecs (1-9, 0-6).

The Spartans last won a share of the Big Ten crown in 1990.

North Carolina - among the nation's leaders in turnover margin - also hung in defensively against the Yellow Jackets' triple-option offense and converted a pair of fumbles into Houston's touchdowns to break the game open.

Morgantown, W.Va. - Tony Pike threw a 2-yard touchdown pass to Kazeem Alli in overtime to lift Cincinnati to a win over West Virginia, creating a three-way tie atop the Big East.

Cincinnati (7-2, 3-1) managed just two first downs after halftime after leading 20-7, but answered the field goal with a well-run touchdown drive and created a first-place logjam with West Virginia and No. 25 Pittsburgh.

Tallahassee, Fla. - Christian Ponder threw for a touchdown and ran for another and Antone Smith ran for two scores and the Seminoles defeated the Tigers on coach Bobby Bowden's 79th birthday.

Clemson (4-5, 2-4 Atlantic Coast Conference) had won the past three games in the series under Bowden's son, Tommy Bowden, who was fired last month after a 3-3 start. Interim Clemson coach Dabo Swinney is 1-2 since taking over.

A crowd of nearly 80,000 sang "Happy Birthday" to Bowden in the final moments of the game. The victory was the 380th for Bowden, who is second among major college coaches. He is 5-1 in games coached on his birthday and just one game behind Penn State's Joe Paterno.

Pittsburgh - Pittsburgh wide receiver Aundre Wright ran 7 yards for his first college touchdown after having a long scoring run called back by a holding penalty and the Panthers turned four turnovers into scores while routing Louisville.

Pittsburgh, which is still in the running for the Big East title, ended a seven-game losing streak to Louisville (5-4, 1-3) that dated to 1983 and included four losses in Pittsburgh.