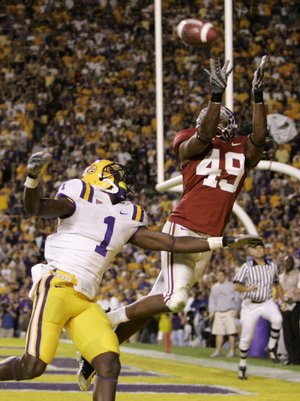 Baton Rouge, La. — Nick Saban lingered at LSU's end of the field, seeking out the players he once recruited to the Tigers. He wanted to give each of them a hug, pass along a few words about how much they still meant to him.

Then it was time to head the other way.

In a bittersweet return to the school he once coached, Saban kept his current team on course for a shot at the national championship with a thrilling win Saturday. After missing a chip-shot field goal on the final play of regulation, No. 1 Alabama stayed perfect when John Parker Wilson scored on a 1-yard sneak in overtime for a 27-21 victory over the 15th-ranked Tigers.

The Crimson Tide wrapped up a spot in the Southeastern Conference championship game, a stunningly quick accomplishment even for a coach of Saban's renown. He took over a proud program that had been mired in mediocrity, and needed only two years to bring it back to the prominence it held under Bear Bryant.

He's familiar with this position, having led LSU to the BCS championship in 2003. He traded the Tigers for the NFL's Miami Dolphins, only to decide after two seasons that he was a college coach at heart.

When Alabama called with a $4 million-a-year contract offer, Saban jumped at the chance - even though that put him back in the SEC West, the same division as LSU. Needless to say, most Tiger fans weren't exactly thrilled to see their former coach wind up at one of their biggest rivals.

All along, Saban has insisted the decision wasn't personal.

"We have special memories of this place," he said. "We always will, and no one will ever tarnish those, no matter what they do."

Alabama (10-0, 6-0 SEC) barely survived its toughest test yet. After Charles Scott tied it for LSU on a 1-yard touchdown run with just over 6 minutes remaining in the fourth quarter, Alabama drove into position to win it. From the 12, Saban called his final timeout with 3 seconds remaining.

Leigh Tiffin lined up for a 29-yard field goal, but his kick was low and Ricky-Jean Francois swiped it away with his big right hand.

LSU (6-3, 3-3) got the ball first in overtime, only to give away even a shot at the field goal when Jarrett Lee threw his fourth interception - the third pick of the game by Alabama's Rashad Johnson, tying the school record. The Tide didn't even bother with another field goal try, having already missed twice.

Wilson hit Julio Jones along the sideline, and the freshman dragged his defender to the 1 for a 24-yard gain. Two plays later, Wilson powered into the end zone to win it. Saban, surrounded by a larger-than-usual contingent of state troopers, threw up both arms, then strolled onto the field to shake hands with his LSU successor, Les Miles.

For a minute or two, it looked as though Saban might head to the wrong locker room, but he was merely trying to speak with his ex-players. Finally, after drifting deep into the Tigers end of the field, he took off running toward the Alabama locker room - with a dozen troopers struggling to keep up. He pointed toward the Crimson Tide's raucous contingent before disappearing into the tunnel.

There were no hard feelings toward those LSU fans who held up signs such as "Miles Over $aban."

"It's really not sweeter clinching the (SEC) West in Tiger Stadium," Saban said, his voice rising. "It really isn't. My emotions for this place are positive, not negative. I didn't leave LSU to go to Alabama. I left LSU to go to Miami. Myself and my family learned that we didn't like professional football as much as we liked college. So we had the best opportunity to return to college football at the University of Alabama. There is nothing personal in that for me."