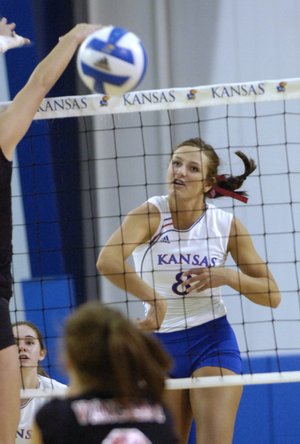 The Jayhawks received high ratings for their efforts.

KU middle blocker Brittany Williams began the match auspiciously enough by smacking a kill cross-court off the chin of an unassuming Texas Tech player. Kansas never trailed in the set.

Williams said she actually meant to hit the ball down the middle of the court, but it carried farther than both she and her opponent thought.

"It's angles and physics and stuff," said Williams, who finished with five kills.

When things are going right, one does not argue with the laws of gravity and science.

Freshman setter Nicole Tate certainly got a kick out of Williams' spike.

"I love those," Tate said. "Just little plays that they error on. Someone gets hit in the face on the other team. It makes your day, I'm not going to lie."

It simply was that kind of evening for the Jayhawks. A full-fledged laugher, which occurs rarely in the Big 12 Conference.

Saturday's match lasted little more than an hour, including the 10-minute intermission after the second set. Perhaps that's because the Red Raiders didn't exactly leave the Jayhawks shaking in their shoes upon arrival in Lawrence.

Texas Tech had not won a match in 1 1â2 months, a stretch of 12 contests coming in. Saturday, the Raiders nearly finished their match with a negative attack percentage. In the end, they totaled two more kills (28) than errors (26). They led on only two occasions during the entire match and never by more than one point.

Thank God forteams that are worse than KU!

Does anyone know the time of the volleyball match with Nebraska on Saturday, Nov. 15th?