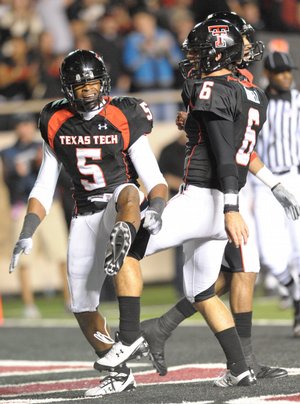 Texas Tech's Michael Crabtree and Graham Harrell celebrate after a touchdown against Oklahoma State. Harrell (40-for-50, 456 yards, 6 TD's) and Crabtree (eight catches, 89 yards, three TD's) had a field day against the Oklahoma State defense, and the Red Raiders dominated the Cowboys, 56-20, on Saturday in Lubbock, Texas.

Lubbock, Texas — Around the time Michael Crabtree caught his second touchdown and stood in the back of the end zone staring at the crowd - or maybe when he celebrated his third score with a high-flying chest bump into Graham Harrell - the questions about Texas Tech vanished.

That victory over then-No. 1 Texas was no emotion-fueled fluke.

Harrell and Crabtree picked up right where they left off against the Longhorns, leading Texas Tech to touchdowns on seven straight possessions on the way to trashing No. 8 Oklahoma State, 56-20, Saturday night and solidifying an inside track to the national championship game.

Now that the Red Raiders have gotten by two straight top-10 foes, one more awaits: No. 6 Oklahoma. In Norman.

At least Texas Tech (10-0, 6-0 Big 12) has next weekend off to get ready for yet another game that will be billed as the most important in school history. The stakes will be high - the biggest remaining obstacle to winning the Big 12 South, earning a spot in the conference title game and playing its way into the national championship game.

"We've said that all year - we have a chance to be really special," said Harrell, who was 40-of-50 for 456 yards and six touchdowns, three to Crabtree. "We've just improved every week, gotten better and continued to win. Hopefully we'll continue to improve and to win."

The Red Raiders are No. 2 in the BCS standings. Saturday's victory, plus a loss by Penn State, should keep them close to top-ranked Alabama.

Texas Tech also remains one of five unbeaten teams in the country, and upped its winning streak to 12 in a row, best in the nation and in school history.

Austin, Texas - Colt McCoy passed for 300 yards and five touchdowns, Ryan Palmer returned an interception 22 yards for a tiebreaking score, and the Longhorns beat Baylor for a much-needed rebound victory a week after their last-second loss at Texas Tech.

Texas (9-1, 5-1 Big 12) scored on its first two drives before Baylor (3-7, 1-5) tied it by scoring twice in four minutes. The Longhorns went ahead to stay when Palmer picked off a deflected pass, pulling it off his shoulder pads, then spinning and running to the end zone.

McCoy likely refueled his Heisman Trophy bid by completing 26 of 37 passes for his fourth 300-yard game this season, and eighth of his career, without playing the final 12 minutes. The touchdowns went to four different receivers, though he did have two interceptions.

Quan Cosby, who only played the opening series at Texas Tech after hurting his back, returned with eight catches for 111 yards and two touchdowns.

DeMarco Murray, Matt Clapp, Ryan Broyles and Juaquin Iglesias had TD catches, and Bradford had a touchdown run for the Sooners (9-1, 5-1 Big 12), who set a single-game scoring record for an opponent at Kyle Field.

The Sooners have scored 231 points in four games since a 45-35 loss to Texas. Their defense was equally impressive in this one, holding the Aggies (4-6, 2-4) to 26 rushing yards and forcing four turnovers. OU led, 66-21, after three quarters.

Bradford completed 22 of 33 passes for 320 yards and tied a school record with his eighth 300-yard game of the season.

Missouri (8-2, 4-2 Big 12) took control with 17 points in the final 5:46 of the half, including a pair of touchdown passes from Chase Daniel to Maclin. Maclin had eight receptions for 118 yards and two TDs, four carries for 84 yards and a third TD on a 56-yard jaunt on a direct snap.

Kansas State (4-6, 1-5) has lost five of six under lame-duck coach Ron Prince, the latest setback coming only three days after Prince was fired effective at the end of the season.

It was a familiar feeling of helplessness for the Kansas State defense, burned by Maclin as a freshman last year for three touchdowns and a school-record 360 yards total offense in Manhattan. Maclin entered the game averaging 189.67 all-purpose yards, second in the nation.

The Tigers got a strong effort from their lightly regarded defense to beat Kansas State for the third straight time after losing 13 in a row to the Wildcats.

Boulder, Colo. - Cody Hawkins rallied Colorado, and the Buffaloes' defense held the Cyclones on the one-yard line as time expired.

Hawkins, who took over for an ineffective Tyler Hansen in the second half, threw for 226 yards and four touchdown passes, two of which went to Scotty McKnight.

The Cyclones (2-8, 0-6 Big 12) drove the ball down to the one with three seconds remaining, but Alexander Robinson was stuffed for a loss.

Hansen completed just four of 12 passes for 48 yards and one interception.

Hawkins energized the offense and led the Buffaloes to two straight scores to start the second half.