Freshman forward lauds Jackson, but wants to be himself 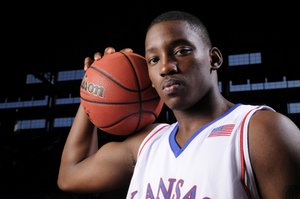 No less an authority than Kansas University basketball coach Bill Self has compared KU newcomer Quintrell Thomas to one of the most beloved former Jayhawks in recent history.

And as touched as Thomas is to be likened to Darnell Jackson, he isn't sure it's the compliment he'd hoped to hear coming off his coach's tongue.

"I'm not likin' this comparison," Thomas said, choosing his words carefully so he wouldn't cast aspersions on Jackson, whose gritty style eventually earned him a three-year contract with the Cleveland Cavaliers. "I mean, it's not bad to be compared to Darnell. He's a great player and all, but I don't want to be compared to him. I don't want to be the next Darnell Jackson. I've got to be myself."

At 6-foot-7, 241 pounds, Thomas is an inch shorter and nine pounds lighter than Jackson was last year. But in Self's analysis, the comparison goes beyond stature.

"(Thomas) is an athletic power forward," Self said. "His offensive game is one that is expanding. He's going to give us an element of toughness, and his defensive rebounding will be something we look to early in his career. He is explosive, a great runner, jumper. He does remind me of Darnell when he first got here."

"See, I don't even know what that means," he said.

Told Jackson was considered talented but raw as a rookie, Thomas balked.

Whether Thomas improves like Jackson did remains to be seen, but it would appear he has the potential.

Thomas averaged 14.7 points and 8.5 rebounds as a senior at Saint Patrick High in Elizabeth, N.J., when he was named an all-state and all-county pick. He's big and athletic and has a knack for rebounding.

But Thomas wants to be known for putting the ball in the hole, not just pulling it down.

"Nobody's really a scorer on this team," he said. "There's nobody coach will look to to score a lot. That could be my role. I just need to come in and find my niche."

One of seven KU newcomers, Thomas might have a hard time finding his niche just among the rookies, let alone on a team coming off the national championship. After all, aside from Sherron Collins and Cole Aldrich, only a handful of other Jayhawks even took the court for KU last season, making the preseason a wide-open free-for-all in the quest for playing time.

"Of course, there are going to be critics," Thomas said. "Somebody might not think I'm that good, or somebody else isn't that good. The freshmen, all the freshmen, have to come out and prove ourselves. None of us have big egos. Nobody's hard to get along with. We've come together so well because we're all new players. Nobody's trying to hold onto a spot.

Count Thomas in the former camp.

It is a good thing to be compared to Darnell Jackson and not because of his game or talent. It is good because Jackson is a Man of integrity, character and heart. Those shoes will be hard to fill. From what I've heard, Jackson is well liked and respected by his teammates in Cleveland, including LaBron. Everyone of this group is being compared to someone whether it be Jackson, Rush, Chalmers, Robinson, or Shady. We as fans will have to accept this team for its unique identity. I am just as excited to watch this team develop and compete as the elder Jayhawks. I will be just as eager to watch the players from this team play in the NBA as I am past Jayhawks. I know that this team will be good because they are good. Self is the best coach in college basketball in my opinion. It was fun watching the last team develop and this team will be even better.

You look good in a Kansas uniform Quintrell. I don't know your wingspan, but when I see 6'7" 240lbs, I think of Zo. You probably don't know Zo. But something tells me you will, in time. That's a high compliment by the way. Alonzo Jamison earned that moniker by playing like a beast in the paint, even though he was 6'6", and was an icon at Kansas. Judging from this video http://www.brightcove.tv/title.jsp?title=1315822384&channel=1215674518 you look much more athletic than Zo, and with even a better touch around the basket. But I haven't seen you play at 240lbs yet.I like that you just want to be Quintrell. Go out there and do what Self teaches you, do what you do best, and hit those free throws. Do that and you'll get your minutes, and the Fieldhouse will be chanting "Q" in no time.

My guess is that Coach Self said that "his defensive rebounding will be something we look to early in his career" isn't as much a description of Q's game, as much as it is a statement of his expectation for Q. Q (or a teammate) will do well to notice and impress this deep into our young Jayhawk.Q may look around and see no "go to scorer", but that apparently is not a concern for Coach Self. If it wasn't last year, it isn't likely to be now. Learn your D responsibilities, and grab the ball. The pts (& minutes) will come in the process, not in set plays.Rock Chalk