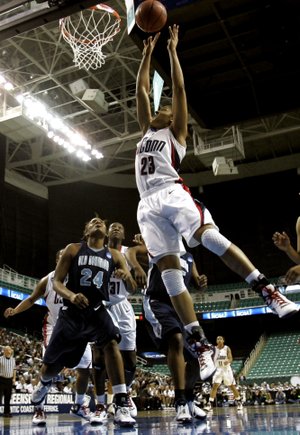 Connecticut forward Maya Moore (23) goes up for a basket.

Greensboro, N.C. — Maya Moore slipped into the post and stuck back a teammate's miss. She pulled up and knocked down mid-range jumpers. She drifted outside and buried three-pointers.

There might not be a shot Connecticut's young star doesn't have - and nobody in this NCAA Tournament has stopped her so far.

The freshman phenom had 25 points and 11 rebounds in her second straight 20-point postseason performance to lead top-seeded UConn past Old Dominion, 78-63, in a Greensboro Regional semifinal Sunday.

"When you play teams that you aren't really familiar with, it's hard to get a feel for" them, Moore said. "Maybe at times, they've lost me, and I'm getting open threes. It's something that I've been doing throughout the season, and I'm going to continue to try to do (it).

"I'm not going to lose confidence just because we're in the tournament," she added. "I'm going to keep trying to score and attack teams (because) as we go on, the road's going to get tougher and tougher."

Renee Montgomery added 13 points for the Huskies (35-1), who never trailed, shot 47.5 percent and put the game away with a 20-1 run early in the second half. They earned their 14th straight victory, beat the Lady Monarchs for the second time this season and claimed their third straight berth in the round of eight.