After knocking off Oklahoma on Friday, today the Kansas tennis team returned against Oklahoma State. 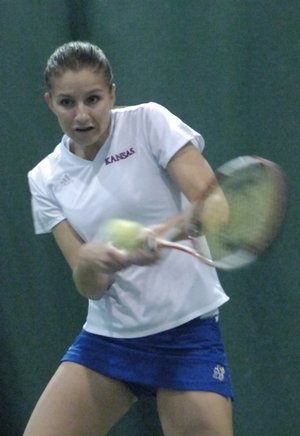 Exacting a little revenge against a Big 12 Conference opponent sure is sweet.

And the women didn't forget last year's loss and put up the same result, except this time in their favor - a 6-1 victory at First Serve Tennis Center.

"Last year they beat us 6-1, so I wanted to tell them that we needed to come out with vengeance and with high energy and a lot of pride to take care of them," Hall-Holt said. "And the girls did it. They stepped up from doubles all the way in to singles. Watching them, I was just really proud of how they came out prepared today."

Behind the guidance of a struggling senior and a talented freshman, the Jayhawks pushed their record above .500 in Big 12 Conference play (3-2, 7-8 overall).

Senior Elizaveta Avdeeva, who had lost five straight matches at No. 2 singles heading into Sunday, took control of her match with Yawna Allen and won, 6-3, 6-1.

"It's always nice to see her win, especially with the way she's been struggling a little bit," Hall-Holt said.

KU won the doubles point with wins by No. 1 duo Avdeeva and Edina Horvath and the No. 3 team of Maria Martinez and Magdalena Tokarczyk to take the early lead.

"It's always exciting when freshmen play at the same level as you are," Avdeeva said of Tokarczyk. "It was good that she kind of felt that we needed it."

However, the clincher by the freshman did have one senior bumming a bit.

Lauren Hommell, who plays at No. 6 singles, had gotten used to being the deciding point for KU. Three times this season Hommell earned the dual-deciding point, with the latest being in a 4-3 victory over Oklahoma on Friday.

"You know, I kind of like clinching it because I feel like I play better," said Hommell, who won, 4-0, because of injury default. "I do play better when I'm focused more. Like today, I was just kind of wandering around trying to make myself focus. I felt kind of like I had ADD (attention-deficit disorder) today."

KU will try to carry its momentum into a big weekend when it plays host to No. 2 Baylor on Friday.

"One thing I've been preaching to the girls this week is that we have everything to gain this weekend and nothing to lose," Hall-Holt said. "We've got to go out and play like we're playing for a national title."

NIce turn around by the KU WT etam.

Go get them girls!