Junior Preston Land takes a stab at a pitch. Land drove in two runs in KU's 10-8 loss to Texas A&M on Sunday at Hoglund Ballpark.

This afternoon Kansas and Texas A&M were back at Hoglund Ballpark for the final installment of this week's series. 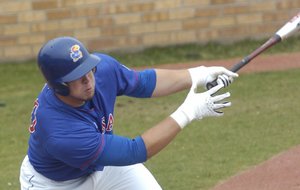 Junior Preston Land takes a stab at a pitch. Land drove in two runs in KU's 10-8 loss to Texas A&M on Sunday at Hoglund Ballpark.

If only Kansas University's baseball team could pop out all the lights on the left side of the Hoglund Ballpark scoreboard, take a mulligan and begin its games in the second inning.

Wishful thinking may be the only thing the Jayhawks have to erase their first-inning pitching woes right now.

It was the first time the Jayhawks had been swept at home in three years.

The victim in KU's rotation Sunday was Sam Freeman, a junior-college transfer in his first season with the Jayhawks. Freeman allowed five runs in the first and another in the second, putting Kansas in an early 6-0 deficit.

"It's tough when you've got to try to find your way out of a hole from the first inning," KU shortstop Erik Morrison said. "You're looking at a lot of innings ahead, and you're thinking, 'How are you going to cut this thing in half?' ... You can't get down on (the pitchers) because they've got to pitch the rest of the innings and put up zeroes."

Coach Ritch Price said he was proud of the way his team battled back after falling behind, but he certainly was steamed with his players, giving them a stern lecture in the outfield grass after the game.

"We've just got to get on a consistent basis where they're not burying our club," Price said of his starting pitchers. "Obviously, we had no chance to win once the first inning ended today."

Strangely, however, the Jayhawks did have a chance to win after the first inning. In fact, KU's aluminum bats exploded in the bottom of the second, as the Jayhawks sent 13 batters to the plate and scored seven runs. Senior Ryne Price's single to left plated the final run of the inning to give KU a 7-6 lead.

When Morrison lined a run-scoring single to center in the sixth, it pushed the margin to 8-6, and it looked as though KU might finish the huge turnaround.

But the Aggies' Darby Brown - who hit a grand slam off Freeman in the first - smoked a two-run homer to dead center to tie it in the seventh. An inning later, Dane Carter's single off Andres Esquibel scored two, accounting for the final runs of the game.

"When you score eight runs a game, you should be able to come out with a win," said Morrison, who finished with two of KU's 12 hits. "It's just like one little thing away from turning this whole thing around."

Cream puffs are over and the3 beat downs continue in the Big XII.

Looks like another season of missing the Big XII tourney (sigh)!!