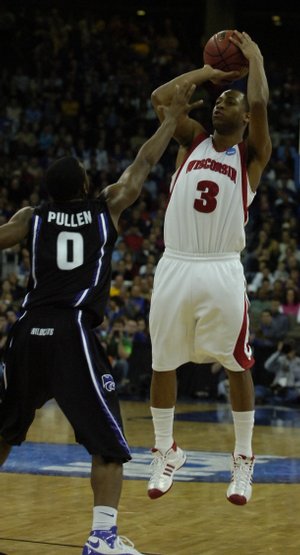 Omaha, Neb. — Even after Wisconsin advanced to the round of 16 in the NCAA tournament on Saturday, Michael Beasley still was the hot topic of conversation.

That was OK with the Badgers, who made Beasley all but disappear in the second half of their 72-55 victory over Kansas State.

"I like playing under the radar," said Trevon Hughes, who matched his career high with 25 points. "We know what we've got in the locker room. It put a chip on our shoulder and made us go out and play even harder."

The third-seeded Badgers (31-4) quietly won the Big Ten regular season and tournament championships, then methodically beat Cal State Fullerton in the first round of the Midwest Regional.

Wisconsin's 12th win in a row and 25th in 27 games broke the school record for victories in a season. The Badgers head to the regional semifinals in Detroit against Georgetown or Davidson as just about the hottest thing going in college basketball.

"All year," Michael Flowers said, "a lot of people didn't think highly of us and our talent and our potential."

That's because winning with old-fashioned hard work and toughness, like the Badgers did again Saturday, doesn't elicit much more than a shrug.

It's guys like Beasley who are all the rage, especially when speculation abounds that he's headed for the NBA after one year of college ball. Beasley said after the game that he would put off a decision for at least a couple weeks.

"As of right now, I'm a Kansas State Wildcat," he said.

The Badgers, the Midwest Region's No. 3 seed, shut down Beasley in the second half. He finished with 23 points, but only six after halftime when the Wildcats needed him most.

The offensive star was Hughes, who had just eight points in the 71-56 win over Fullerton. The sophomore guard scored in double figures for the first time in seven games and had his biggest output since scoring 25 in the season opener against IPFW.

Flowers had 15 points and Greg Stiemsma a career-high 14 for the Badgers, who are in the regional semifinals for the first time since 2005.

"Today, this felt good, the ball in my hand," Hughes said. "Any given day I feel like anybody on this team could go out there and score 20 points."

Hughes had eight points in a 13-2 run over the first and second halves to break open the game, and hit four of the Badgers' nine 3-pointers.

"We knew going into the game we would have to make some jump shots to win this game," K-State coach Frank Martin said. "I felt 11 of the 13 3s we took were the ones that we were looking to shoot, and they just didn't go in for us today. When that happens, chances of us succeeding become a little more difficult."

Beasley, just 2-for-6 in the second half, hugged teammates and coaches when he left the game for the last time with 53.9 seconds left.

Fellow freshman Bill Walker scored 18 points for the Wildcats (21-12), but it was Beasley the Wildcats needed when they got behind by double digits in the second half.

Beasley opened the game with a fancy fall-away jumper in the lane, and he easily glided around Stiemsma for a smooth finger-roll basket. But Beasley missed a couple easy ones, and each time he yelled at himself and clapped his hands in frustration on his way back to play defense.

Beasley scored only two points the first 10 minutes of the second half. The Badgers not only limited Beasley's points, they limited his touches.

And not making them.

Now the Badgers are headed to the Motor City - quietly.

"We shocked a lot of people by winning the Big Ten tournament and playing against Walker and Beasley," Flowers said. "We faced good opponents all year, and those games helped us in preparation for this game."

Basically, Detroit is to Wisconsin what Omaha was to Kansas. There is going to be a decidedly home atmosphere for the Badgers in the Elite 8 if both Kansas and Wisconsin advance past the next round. We've played away games before, obviously; however, there is going to be a new configuration for seating on March 28th in Detroit that will be the pattern for all future Final Fours. The new configuration is designed to allow more fans to view the action. This means the "home effect" of Detroit will be even more observed. Furthermore, Wisconsin has great defense. This is key because to negate the home crowd advantage, KU will have to overcome the Badgers' defense and take them out of the game by dictating tempo and asserting our own game plan.

It will not be an easy game.

Maybe Davidson will knock off Wisconsin? Also, maybe Wisconsin is dearly hoping to NOT have to face KU? Our guys just have to take care of business and play complete games now--thats what it will take. And I will always say: when this KU team is "on", nobody can beat us. And if we are "on" defensively too, no way in hell anyone can beat us, not Memphis, UNC, or Wisconsin or UCLA...