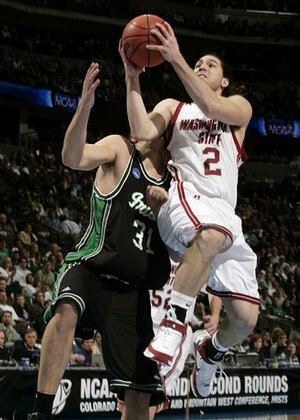 Washington State guard Derrick Low (2) goes up for a shot against Notre Dame forward Rob Kurz (31) in the first half during a second-round South Regional NCAA basketball game, Friday, March 22, 2008, in Denver.

Derrick Low scored 18 points and Kyle Weaver added 15 as the Cougars won a clash of styles, beating Notre Dame 61-41 in the second round of the East Regional on Saturday night.

The Cougars held Harangody to 10 points, half his average, and limited the Irish to half their scoring average, too.

Harangody got his usual double-double, his 19th, by also pulling down 22 rebounds, but he had to work extra hard for everything he got and he was flustered on the offensive end - double-teamed, banged and bumped every time he got his hands on the ball.

Robbie Cowgill added 12 points for the fourth-seeded Cougars (26-8), who are headed for Charlotte and a regional semifinal game with either North Carolina or Arkansas.

The only other time the Cougars won twice in the NCAA tournament was back in 1941, when they advanced to the national championship, losing to Wisconsin 39-34.

The Fighting Irish's previous low for points came Nov. 18, when they lost to Baylor 68-64.

The Cougars jumped out to a 17-7 lead in the first 10 minutes and were hardly ever threatened, taking a 32-19 lead into the locker room and stretching the advantage to 61-39 in the final minute, ruining Irish coach Mike Brey's 49th birthday celebration.

Making back-to-back trips to the NCAA tournament for the first time in school history, the fourth-seeded Cougars tied their school record for wins, set in 1940-41 and matched last year in Tony Bennett's first season, which ended with a dynamite double-overtime loss to Vanderbilt in the second round of the NCAA tournament.

The Cougars, who rotate so well, double-teamed Harangody every time he touched the ball, and the big bruising forward who averaged a double-double (20.7 points, 10.3 rebounds) missed his first three shots and turned the ball over before banking one in at 9:41, ending a 6-minute scoreless drought and a 12-0 run by Washington State that had given the Cougars a 17-7 lead.

Notre Dame scored just four points during a 9Â½ minute stretch in the first half, falling behind 19-11.

Aron Baynes went to the bench with his second foul at 5:35 and Harangody's free throws made it 19-13, but the Cougars got great play off the bench out of junior center Caleb Forrest to extend the lead going into halftime.

Baynes picked up his third foul on a charge just one minute into the second half, but the Cougars scored three straight baskets inside, forcing Brey to call time with 16:06 left instead of waiting for the media timeout moments later.

The Fighting Irish responded with a 9-0 run, including a 3-pointer and a runner by Kyle McAlarney, who scored a team-best 12 points, to trim Washington State's lead to 38-31, and suddenly it was a contest.

Low replied with consecutive baskets and just as quickly as the Fighting Irish had breathed life into their fans at the Pepsi Center, the Cougars quieted the large Notre Dame contingent.

By then, Harangody was throwing up a brick and McAlarney was getting whistled for carrying the ball, and the Irish, beset by scoring droughts like never before this season, were making the kinds of silly mistakes they had avoided all year while winning a program-best 14 Big East games.