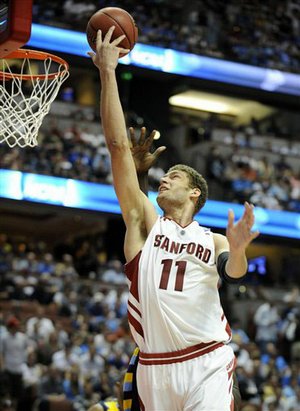 Stanford's Brook Lopez shoots the ball against Marquette during the second half of their second round basketball game at the NCAA South Regional on Saturday, March 22, 2008 in Anaheim, Calif.

In an emotional response to Johnson's first-half ejection, the Cardinal rallied for an 82-81 overtime victory over Marquette in the NCAA's South Regional on Saturday, advancing to the round of 16 for the first time since 2001.

"We stay together no matter what," point guard Mitch Johnson said.

The Cardinal, who trailed by as many as 11 points in the first half, advanced to Houston, where they will face Miami or Texas.

Brook Lopez made a baseline leaner with 1.3 seconds left to win it for the third-seeded Cardinal (28-7). Lopez, one of Stanford's twin 7-footers, finished with 30 points, one shy of a career high. The bucket came on Mitch Johnson's career-high 16th assist.

Trent Johnson, the Pac-10 Coach of the Year, was ejected with 3:36 remaining in the first half for walking on the court to argue a foul call.

His ejection seemed to fire up the Cardinal, who trailed 36-30 at halftime.

"We knew that we had to win that game from that point on," said Robin Lopez, Brook Lopez' twin brother. "We weren't going out like that."

Brook Lopez scored eight of Stanford's 11 points in overtime as the Cardinal took advantage of a big size difference. The Golden Eagles were hampered after their best big man, Ousmane Barro, fouled out with 1:44 left in regulation.

"When Ousmane went down with the fouls, there's no question it changed for us a little bit," Marquette coach Tom Crean said.

Brook Lopez was an effective counter to Marquette sharpshooter Jerel McNeal, who scored a career-high 30 points, and hit three 3-pointers in overtime.

But McNeal missed at the worst time for the sixth-seeded Golden Eagles (25-10). With about 15 seconds left, he misfired a 15-footer, and the Cardinal rebounded and called timeout.

McNeal's miss set the stage for Brook Lopez's winning bucket, which came over the 6-foot-8 Dwight Burke. The ball rolled around the rim before falling through.

"I was pretty much watching from behind the backboard the whole time, and the ground," Brook Lopez said. "So I guess I got a nice bounce or something."

When Marquette's long inbounds pass was batted away, the Cardinal mobbed each other at midcourt, capping a riveting game.

"They got the final shot," McNeal said. "Lay-up. Game over."

Regulation ended with drama at both ends of the floor.

Stanford trailed 69-68 with 1:44 to play when Barro fouled out, sending Brook Lopez to the line.

After Brook Lopez hit both free throws, McNeal drove for a bucket to make put the Golden Eagles up 71-70 with 1:10 to play.

With 8 seconds to play, Mitch Johnson missed a layup and Robin Lopez was fouled in the lane. Robin Lopez, a 67 percent free-throw shooter, missed the first shot and swished the second to tie it at 71-71.

McNeal launched an off-balance 3-pointer with about 5 seconds left, and Marquette came up with the loose ball. But Brook Lopez blocked Lazar Hayward's fallaway shot and the game went to overtime.

Brook Lopez overcame a 1-for-7 start. Robin Lopez scored 18 points on 7-for-10 shooting.

While Stanford relied heavily on the Lopez twins, Marquette countered with quickness and a balanced perimeter attack. The Golden Eagles scrapped for every loose ball and outrebounded the taller Cardinal 45-38.

The teams battled on even terms until late in the first half, when Trent Johnson drew his technicals in quick succession after Stanford's Lawrence Hill was called for a foul on Hayward.

The first technical was assessed by David Hall as the teams went to a timeout. Johnson received the second technical, and the ejection, from Curtis Shaw when he walked toward the officials with his hands on his hips.

Coaches often take the floor during timeouts, but Shaw said time had not been called when Johnson walked onto the floor.

"A timeout doesn't begin until we report it," Shaw said. "We had never called a timeout.

"During a timeout, coaches are allowed to stay in the vicinity of their bench," Shaw said. "They are not allowed to walk out on the floor and continue to complain. He was warned in the first half visibly with a 'stop' signal. 'Trent, that's enough.' "

Stanford assistant Doug Oliver, who later took over, put his hands to his head as Shaw tossed Johnson.

Johnson glared at the officials before walking past the Marquette bench and into a tunnel as Golden Eagles fans jeered.

"The bottom line was, the responsibility was on me, and I was out of line," Trent Johnson said. "Just leave it at that if you would, please."

Wesley Matthews hit all four free throws awarded for the technicals to give the Golden Eagles a 29-24 lead, and Marquette's lead grew to 36-25 before Stanford reeled off the final five points of the half.

"We knew they weren't going to go away," Crean said. "We knew Stanford was going to continue to battle and, if anything, take up their intensity another notch."

Johnson went to the dressing room. When his team got there at halftime, he told his players to stay calm - odd advice for a man who had just been ejected.

"He came in and went over the pointers and said we've shown mental toughness and character the whole year, and he just wanted us to show it," Mitch Johnson said. "I think Marquette had us on the ropes a couple times, and we really showed a lot of character tonight."