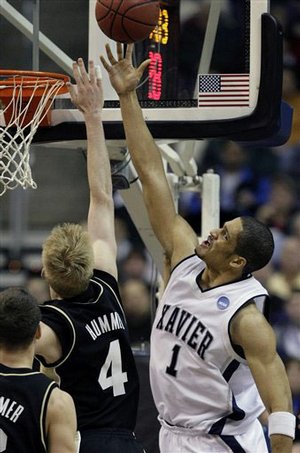 Washington — If Purdue could have picked one or two players from Xavier to focus upon, then surely the Boilermakers would have had an easier time fulfilling their reputation as one of the best defensive teams in the Big Ten.

Purdue, however, discovered what many Atlantic 10 teams already know: The X-men are simply too balanced. Even if you find a way to stop a couple of them, two or three others are more than capable of taking over the offensive load.

C.J. Anderson and Drew Lavender each scored 18 points, Josh Duncan had 16, Stanley Burrell added 11 and two other Musketeers scored eight apiece Saturday in an 85-78 victory that carried Xavier into the semifinals of the West Regional.

The Musketeers (29-6) shot 54 percent in breaking the single-season school record for wins and setting up a meeting with seventh-seeded West Virginia, a surprise winner over Duke, on Thursday in Phoenix.

"We have a number of different players that can answer the bell on offense," coach Sean Miller said. "It's a really a unique team to guard, because on different nights different people can beat you."

The Musketeers were 26-for-33 at the line and 27-for-50 from the floor against a team that led the Big Ten in field goal percentage defense. The 85 points scored by Xavier were the most allowed by Purdue this season.

"At times," Boilermakers coach Matt Painter said, "we just could not stop them."

"Their defense is legit. Definitely legit," said Purdue's Keaton Grant, who scored 19. "They're not one of those helter-skelter (teams), where it's false defense and it's going to break down in the last five minutes."

The Boilermakers (25-9) have won 10 straight first-round games but have exited without another win in half those tournaments - including two in a row.

Purdue started two freshmen and two sophomores against a Xavier team with three senior starters. The Boilermakers made a game of it, but when the outcome was still unclear, the Musketeers pulled away.

"Definitely the experience showed," Grant said. "If I could compare them to a team - Florida - it's that they didn't get rattled."

Lavender, a 5-foot-7 guard, had nine assists and provided Xavier with a pivotal basket after the Musketeers frittered away an almost insurmountable lead.

It was 60-50, Xavier, with 8:35 left when Robbie Hummel made a layup and a 3-pointer in an 11-0 run that provided the Boilermakers their first lead since late in the first half.

The Musketeers quickly answered. B.J. Raymond made a three-point play, and Lavender challenged Purdue's big men with a successful drive to the hoop down the left side. Anderson capped the 7-0 run with a jumper in the lane, and Xavier did not let the margin slip below four the rest of the way.

Lavender went 8-for-8 at the line in the final minute.

"They were able to get to the free-throw line and make their free throws," Painter said. "Our guys didn't do a good job of getting their bodies there and we wound up reaching. Things of that nature happened all night."

Xavier started horribly, stepping into a 9-0 hole after only three minutes. The Musketeers' first six possessions featured three missed shots and three turnovers, and their defense allowed the Boilermakers to go 4-for-5 with a 3-pointer.

A steal and a three-point play by Purdue's Tarrance Crump made it 12-2, but Xavier got points from six different players in a 19-6 run that made it 21-18, and suddenly the Musketeers were the ones thrusting their fists in the air and exchanging high-fives.

"We came out and punched them in the mouth first and they came back and punched us," Kramer said. "They're so balanced, they're hard to defend."