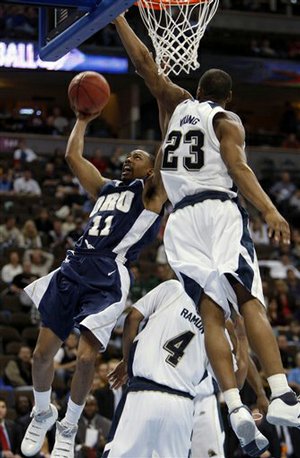 Oral Roberts guard Adam Liberty, back left, goes up for a shot over Pittsburgh guard Ronald Ramon, back right, as forward Sam Young (23) goes up to defend during the second half of Pittsburgh's 82-63 victory in a first-round NCAA men's basketball tournament South Regional game in Denver on Thursday, March 20, 2008.

Denver — They say you play like you practice, and right now, Pitt is doing both extremely well.

Rounding into shape at the perfect time after a season filled with injuries, the Panthers got 23 points from one of their mended players, Levance Fields, in an 82-63 victory over Oral Roberts in the first round of the South Regional on Thursday.

Fourth-seeded Pitt (27-9) won its sixth straight game and eighth of nine - a streak that has coincided with the resumption of full-fledged practices that coach Jamie Dixon couldn't hold when his team was short-handed.

"Just having the full team out there ready to practice and guys knowing what they have to do now just makes everything better and much easier on the court," said Keith Benjamin, who finished with 12 points and nine rebounds.

Pitt (27-9) is making its seventh straight NCAA tournament appearance, though none of those previous teams have made it past the third round.

This team looks different, though - coming off the Big East tournament championship and playing its best basketball of the season in March, for once, instead of January or February.

"It's health, the youth that we had, and the fact that we had to get better," Dixon explained of the recent turnaround. "We had to play better than what we were doing."

Next up, an intriguing matchup Saturday against fifth-seeded Michigan State, a team with a big-and-brawny reputation much like Pitt's. The Spartans defeated Temple 72-61 in an earlier game.

Sam Young, the star of Pittsburgh's run through the Big East, had 14 points. DeJuan Blair finished with eight points and 10 rebounds.

Blair's 265-pound frame made things impossible in the paint for Oral Roberts (24-9). So bad, in fact, that at one point late in the first half, the Golden Eagles were 5-for-9 from 3-point range, 1-for-16 from everywhere else - the sign of a team that's simply unable or unwilling to take the abuse down low.

Robert Jarvis had 16 points, most well after the game had been decided, for the Eagles, who won the Summit League tournament to make their third straight trip to the NCAAs. Andre Hardy added 15 points and Moses Ehambe had 13.

At Oral Roberts, they live with constant reminders of the school motto, "Expect a Miracle," but there were no miracles this day, not against that team.

The Panthers ended it early with an 18-0 run that spanned 5Â½ minutes in the first half and put them ahead 28-13. Fields was the key, hitting a 3-pointer, driving to the hoop for an easy layup, throwing in a 17-footer while getting fouled. The only hiccup came when he actually passed up an open look and threw the ball away. Dixon called a timeout moments after that, and Fields came back with a 3-pointer to make it 31-15.

Fields missed 12 games in the middle of the season with a fractured bone in his foot, causing one of the many roster shuffles that made things so difficult on Dixon's team.

Pitt also lost senior forward Mike Cook and redshirt freshman Austin Wallace to season-ending injuries. Combine that with an injury to Cassin Diggs and nagging injuries that limited Gilbert Brown and Ronald Ramon, and Dixon actually had to bring a walk-on onto the team just to get through practices.

In fact, the practices were really glorified walkthroughs.

"It was crazy when people were injured and we were losing," Young said. "We struggled, and then guys came back and it seemed like we took off. At first we struggled because they weren't used to game situations, but when they got back into it, Levance, he became a leader on the team."

Pitt's latest victory was convincing, even if the opponent wasn't as impressive.

Oral Roberts coach Scott Sutton said he's proud to have led a team that lost its two top players - Caleb Green and Ken Tutt - after last season back to the tournament. But he knows his team has to actually win one of these to really get the boost it's looking for.

He also said beating Pitt would be a tall task, and he was right.

"We've played some great teams the last two years in the tournament," said Sutton, whose previous teams were knocked out by Memphis and Washington State. "I think this is the best team we played."