Hansbrough has Heels humming along 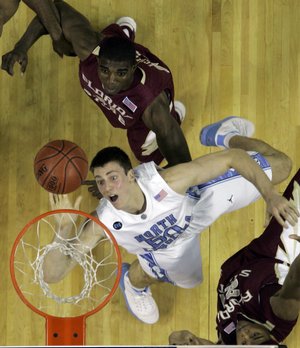 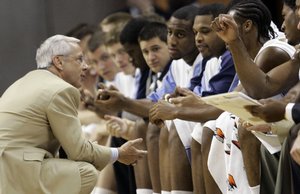 North Carolina coach Roy Williams visits with the Tar Heels during their 82-70 victory over Florida State in the quarterfinals of the ACC tournament.

Why they could win it: The Tar Heels survived the nation's second-toughest schedule with just two losses and overcame the loss of star point guard Ty Lawson for more than a month, allowing them to develop depth with only one setback to show for it.

What could cost them: Defense. The Heels are an offensive machine, having scored more points than any team in the nation through the regular season and ranking second overall at 89.7 points per game. Defensively, though, the Heels ranked 150th with 72.8 points allowed.

Eight teams that can win six

Tyler Hansbrough has done it all for North Carolina's basketball team, not just this season but pretty much throughout his career.

Hansbrough, the Tar Heels' 6-foot-9, 250-pound junior from Poplar Bluff, Mo., has led UNC in scoring and rebounding throughout his three seasons in Chapel Hill, N.C., but when standout point guard Ty Lawson suffered a high-ankle sprain last month, Hansbrough was asked to do something else: more.

"There were a lot of guys maybe looking at me to take a bigger role," Hansbrough said to The Sporting News, the publication that named him the national player of the year.

During Lawson's absence, Hansbrough - a unanimous All-ACC pick and certain All-American - averaged 28.0 points and 12.1 rebounds, above and beyond his season averages of 23.1 points and 10.5 rebounds.

The Heels lost just one game in that stretch, an 89-79 home setback to Duke.

Then they went out and won out, including a quality 10-point overtime victory over Clemson to start the eight-game sizz to conclude the regular season and an impressive 76-68 victory at Duke to end it.

Now here's a scary thought: Lawson should be back close to full strength as the Tar Heels attempt to win the school's fifth national championship and first since 2005.

Can Carolina do it?

It certainly has the firepower.

UNC scored more points than any team in the country and ranked second in points per game (89.7).

Defense, however, is another story: UNC allowed a whopping 72.8 points per game through the regular season.

While the Heels have scored more than 100 points six times and 90 or more points 18 times, they also have allowed 80 or more points nine times en route to a 29-2 regular season.

What's a coach who has built a reputation as being defensive-minded to do?

Make the Heels practice without rims, of course.

Borrowing a page from his 2005 playbook, when he also questioned his team's defensive ability, coach Roy Williams had the Heels practice a few times without rims and nets earlier this year.

Hard to say, but UNC surrendered 82 points in three straight after the rimless workouts, including its 82-80 loss to Maryland in Chapel Hill.

Of course, with the Heels scoring at their torrid pace - they currently rank third in school history in points per game - it might not matter.

Regardless, Hansbrough is driven, and he's reminded of that drive every day.

On the walk from the locker room to the basketball court at the Dean E. Smith Center, he passes, daily, photographs celebrating Carolina's 2005 NCAA title.

And he's sick of seeing them.

But as assistant coach Steve Robinson says, there's only one way to make the pictures go away: win it all.

"He says there's one way you can get those pictures down, and that's to win a national championship," Hansbrough said to The Sporting News. "I'm ready for them to take it down. That would mean we'd won it."