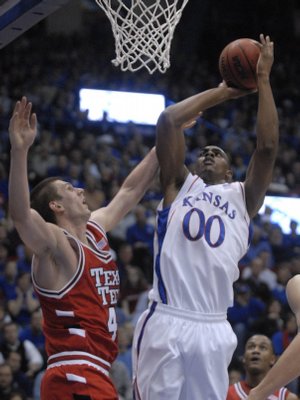 So Stewart, the first of five seniors to speak at center court following Kansas University's 109-51 drubbing of Texas Tech, took it upon himself to supply the tissues before the night's most emotionally charged speech.

Jackson choked up a bit while thanking the fans, his family and coach Bill Self, recalling the talk he and Self had a year ago when the forward considered giving up basketball while fighting through personal issues.

"When coach Self gave me that hug, I never had that father figure in my life just to put their arms around me and embrace me. I just feel safe, like this is my home," he said. "And the fans, you're all great. This is amazing. I'm always gonna come back here. This is my home."

Then came the soft request that his mother, Shawn, stand up.

"You had me at 16, we had our fights, wrestling in the living room, only thing I can say is that I love you, you're an amazing person, fighting through what you went through," Jackson added, referring to his grandmother's passing due to complications from a car accident, which also has put Shawn through a series of medical procedures. "I don't know what else to say, it hurts so bad, because I wish I could take your pain away and put it inside of me. So I love you."

Stewart made sure to address the fans first.

"I remembered the night I came on my recruiting trip here, and it was the best thing ever," he said, glancing at the student section. "I want to let you all know from the bottom of my heart, you're the reason I chose KU."

Jeremy Case followed. The final Roy Williams recruit to leave KU pointed out what an effect Self had on molding Case's future endeavors.

"Coach Self : me and him have had our ups and downs, but honestly I've learned a lot from him," he said. "When I become a coach, I'm gonna do a lot of his things, his philosophies, and I want to thank coach Self, thank you for everything."

The centerpiece of Sasha Kaun's session at the microphone was directed toward his mother, Olga, even though he knew it wouldn't be fully received.

"She probably won't understand half of what I say because she doesn't speak much English," said Kaun, drawing light laughter from the stands. "But it was very difficult for her, because when I had a chance to come to America, I was 16 years old. I'm the only one in the family. She's a single mom. For a mom to let her son go at that age to another country, not only to another city or another state, I think it was a pretty difficult decision, but she stuck with it.

"She thought it was the best thing for me, and I'm pretty sure she's proud of me right now. "

The final speaker was crowd favorite Russell Robinson, who was welcomed with a boisterous 'New York, New York' salute from the crowd.

Robinson looked to the future to wrap things up, reminding folks that that there's plenty of season left, starting with Saturday's 3 p.m. regular-season finale at Texas A&M.

"I just want to let you guys know, that as we get to this last stretch, you guys are going to be the most important part of us being able to perform," he said, addressing the fans. "So we need you to wear your lucky socks, wear your lucky shirt : whatever you do to help us win the games, you've got to continue to do that the rest of the season.

"Hopefully, if everything goes according to plan, we can be back here in a couple more weeks having another great speech."

The execution was unbelievable last night. We look like a different team since the Oklahoma State game weeks ago. The players struggled mightily against the zone in Stillwater, but against K State and especially Tech the passing and movement has been stellar.

Congrats to the seniors. Just a thought (Based on D-Jax comments). Why not give all seniors every year a cermonial "key" to the Phog? It would vconrtinue to make KU home.

Or would that violate NCAA rules? Any thoughts?

I don't know about lucky sox, but if they can play with anywhere near the intensity and focus of last night, another celebration is a real strong possibility.

It was great to see them feed the post and for all of the post guys make moves toward a basket, rather than just kick it back out. There aren't many teams that can match our 4 legitimate post players (It is great to see Cole become legit.). The inside game opens up the outside game.

It was great to see them get the loose balls, which isn't a matter of luck. Loose balls are a matter of intensity vs reaction.

It has been great to see this for the last two games, and there should be 10 more if they can keep this attitude.

I was so proud to be a Jayhawk fan today at memorial stadium. I've had Parkinson's disease for the past 25 years, but my aches and pains seemed to disappear as soon as I hit the stadium, where I felt so at home. My step was somewhat jaunty. I think I got my swagger back, Lew. I was on the KU PomPon Squad from 1973-1975. We would practice there M-F from 3-5:00 during football and the same regime at the Fieldhouse during Basketball. I never missed a game, I loved them so much. My blood had been a deeper shade of blue and a redder red ever since my experience with KU. I still never miss a game, even when it meant sneaking a Transistor radio with an earphone to my son's basketball games. (No iPods back then!) Other fans would ask me the score! My point is that I've remained a big fan! I'm glad to find this site!