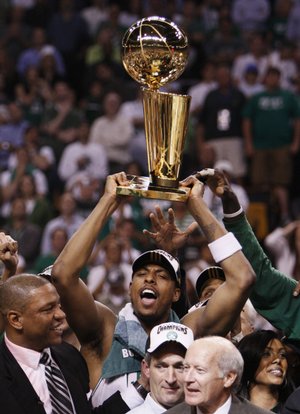 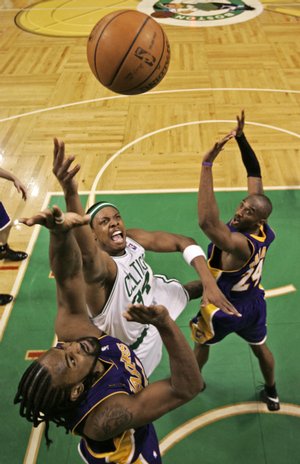 Boston's Paul Pierce, center, shoots over Los Angeles' Ronny Turiaf and Kobe Bryant. Pierce was named MVP of the NBA Finals after the Celtics defeated the Lakers, 131-92, in Game 6 on Tuesday in Boston.

Boston — This was always the Boston Celtics' ace in the hole.

They would have preferred not having to use it, but there was comfort in knowing it was there if they needed it.

They were weary after their Monday charter flight from Los Angeles was delayed several hours because of mechanical problems. Their charter finally arrived about 10:30 EDT at night, sometime after the Lakers. But they were ahead in the NBA Finals. And they were home, where they already were 12-1 in the postseason.

Make that their first NBA championship since 1985-86, their 17th overall, completing the greatest turnaround in league history after a 24-58 season in 2006-07.

Make that a 4-2 series victory over the Lakers with Tuesday night's remarkably impressive 131-92 victory, the largest margin of victory in a series-clinching game in Finals history, in TD Banknorth Garden.

Make that the first championship won by the Celtics, New England Patriots or the Red Sox in Boston since '86.

"This is really sweet for a lot of reasons," Celtics coach Doc Rivers said after earning his first ring. "The players hung in there with all of us. We really pushed them."

Pierce had appeared in 62 previous playoff games, the most by any Celtic who had not won a title.

"It's going to be like coming into the Amazon, into the jungle," the Celtics' Kevin Garnett said after Game 5.

It must have been something like that in the first half as the Celtics exploded to a 58-35 lead at halftime, scoring 26 of the last 32 points. Garnett, who had described his Game 5 performance as "trash" and "garbage" and promised to play better, did just that, contributing 26 points and 14 rebounds.

The Celtics turned the screws defensively, completely stifling Lakers star Kobe Bryant. Bryant had 11 points in the opening quarter, then was 0-for-4 in the second, his only points coming on three defensive three- second violation technical fouls. He finished 7-for-22.

Coach Doc Rivers told the players, "We have Game 6 at home, and that's not a bad place to be."

As it turned out, it was a spectacular place to be. And it included shooting guard Ray Allen, who stayed in Los Angeles after Game 5 to attend to one of his three children, who had a health issue. Allen arrived early Tuesday morning on a chartered flight and was in the lineup. Allen was limited to just 12:23 in the first half, but not because of fatigue: He was inadvertently poked in the eye by the Lakers' Lamar Odom and suffered a cut on the bridge of his nose in the first quarter.

He came back to finish with 26 points, matching a Finals record with seven three-point field goals.

Center Kendrick Perkins, who missed Game 5 with a left shoulder strain, was also in the lineup.

Rivers took out the Big Three of Pierce, Garnett and Allen as a group last in the fourth quarter.

Allen said, "Any time there was that Big Three label, we did our best to downplay it. This is a Big 15. It took all 15 players."

Of his team, Jackson said, "I think everybody's disappointed we didn't give ourselves a chance. We'll look back on this (season) favorably. We were surprised we were here."

One way or another, the teams made some history. The Celtics were playing their 26th playoff game, the most by any team in history. The Lakers were trying to become the first team ever to come back from a 3-1 deficit in the Finals, and the first to win Games 6 and 7 on the road in the current 2-3-2 format. Overall, only two teams - the 1966 Lakers and '51 New York Knicks - had been able to force a Game 7 after falling behind 3-1.

Veterans Pierce, Garnett, Allen and P.J. Brown all won rings for the first time, while Rivers joined Jackson, Larry Brown and Greg Popovich as the only active coaches with rings.

Rivers told the Celtics, as he often does, to "lean in," to depend on one another, to remember that their strength was in their numbers. They used every bit of it.

Jackson was in search of what would have been a record 10th ring, surpassing the nine won by Red Auerbach, the late Celtics legend.

"I notice when I'm aggressive, everybody else is aggressive," Pierce said after scoring 38 points in Game 5. "So I just wanted to make plays. I feel like I have an advantage night in and night out. That's all I do, try to get to the rim and take advantage of my opportunities."

As the evening unfolded, this much was clear: The Celtics had had more than their share of travel problems. The Lakers' problems started when the game started. And never went away.

My bad. Congrats to Scot Pollard too!

Congratulations to Paul Pierce and the Celtics. No better way to follow up a Kansas Jayhawk national title than with a Jayhawk winning the NBA Finals and being named MVP. Between Kansas and Boston, I've become a very spoiled sports fan this last year!

It's great to have a second KU alum win Finals MVP for Boston after Jo Jo in '76! Congrats to both Pierce and Pollard!

Great job Pollard and Pierce! too bad Pollard got hurt and couldn't even play a few mins in the finals.

Scot gets his ring.Sweet for Scot. A year after Jacque, Paul and Scot earn rings. And the same year their alma mater wins it all.Pretty special for those guys who amazingly never reached a Final Four at KU.I loved watching Pierce's interviews during the Finals. When the Celts won, he'd be screaming. You could tell how much he wanted his first ring.He's come a long way since his KU days and he's just 30 years old. He could win a few more.