Kansas University running back Brandon McAnderson hams it up for the cameras with defensive end James McClinton after KU's 24-21 victory Thursday at the Orange Bowl in Miami. 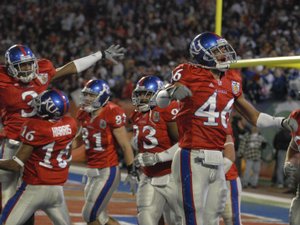 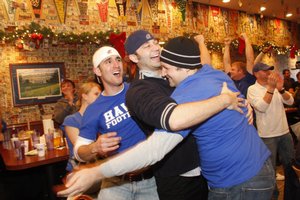 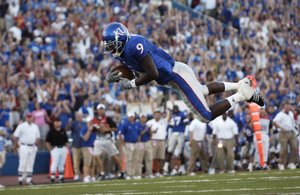 Miami — As oranges flew into the crowd Thursday night and with their favorite players on the grandstand, fans of the Kansas University Jayhawks danced in their seats.

And fans in Lawrence crowded downtown, screamed for joy and shot off fireworks.

"KU winning this game is the best thing to happen to our team, ever," said Robbie Schloss, a KU fan from Cleveland, after KU defeated Virginia Tech 24-21 in the Orange Bowl.

They let it be known that they were tired of the mistreatment they thought their favorite team had received all season.

"This whole trip was worthwhile, just to see Kansas get some respect for the football it plays," said David Staloch, of Minneapolis. Staloch's daughter is a member of the KU cheerleading squad.

"It's about time something good happened at Kansas," said Lucas Jesseph, a KU junior from Shawnee.

In Lawrence, drivers honked on Massachusetts Street, as revelers hung out of sun roofs and windows sporting Jayhawk T-shirts and flags. Several said the celebration caught them by surprise because it's something typically reserved for basketball season around here.

"It was the best time of my life. I loved it," said Mike McCabe, a 2007 KU graduate who lives in Overland Park.

The Jayhawk football team arrives in Topeka about 1:30 p.m. today, with return to Lawrence sometime thereafter.