KU goes back to work against Cowboys

The Kansas men's basketball team returns to work on Saturday after a week off, traveling to Stillwater to take on Oklahoma State. 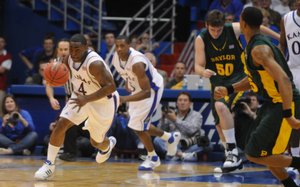 Kansas University's Sherron Collins leads a fast break in a game against Baylor this month at Allen Fieldhouse. 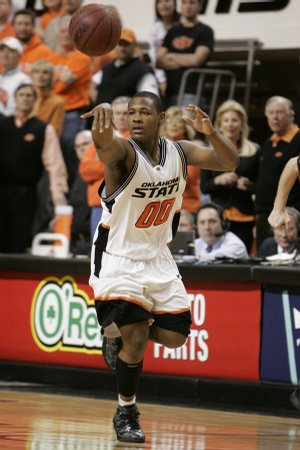 James Schammerhorn/Special to the Journal-World

Oklahoma State's Byron Eaton dishes a pass in a game against Texas.

Stillwater, Okla. — Most basketball players call to mind the body type of a young Tommy "The Hit Man" Hearns, long and lean. Two of the quickest guards in the Big 12 are built more like former heavyweight champion Joe Frazier.

Smokin' Joe was 5-foot-11, 205 pounds when he entered the Madison Square Garden ring on March 8, 1971, wearing green trunks, and pinned the first loss on Muhammad Ali. Those are the precise dimensions of Kansas University sophomore Sherron Collins, and close to the same as Oklahoma State junior Byron Eaton, whose listed weight, down from last season, is 212 pounds.

Eaton, like Collins a football star in high school and a McDonald's All-American, leads the Cowboys against Kansas at 3 p.m. today in Gallagher-Iba Arena. Collins, slowed by a knee bruise that kept him out of practice during the week, insisted he will play.

If Collins does play today, the two stocky guards will battle each other. Otherwise, they root for each other in a battle they both fight daily, the Battle of the Bulge. The guards have done a better job controlling their weight this season than last. Eaton said he played at 228 pounds last season. Collins also ballooned to 228 last season, and, according to KU coach Bill Self, weighed in at 200 pounds last week.

"I root for everybody who's trying to lose weight," Eaton said when asked about Collins before the season started. "That weight can hold you back from doing the things you want to do. So I pray to God he gets down to where coach Self wants him to be and he's able to play how he wants to play."

Collins has handled the first half of that equation, but playing the way he wants to play has been a greater challenge. First, he had surgery to repair a stress fracture in his foot. Then he sprained an ankle. Now, he's slowed by a knee bruise.

Playing in the same conference, the guards inevitably will be compared to each other.

"I can see it," Collins said. "I'll roll with that. We both had a little bit of a weight problem. We both had to lose weight. He's tough to guard like me, quick. He can do a lot of things like me."

Eaton has a backer in Collins in one area.

"I root for all guys who have to lose weight and keep it off," Collins said. "All it is basically is discipline. Those things, once you do that, it helps not only you, but it helps your team also, so, yeah, I root for him."

In the past two games, victories against Baylor and Texas A&M, Eaton is averaging 21 points and has made four of five three-point shots and 16 of 18 free throws.

"The way he's played the last two games, he's had total control of the game on both ends," embattled OSU coach Sean Sutton said. "Offensively, he plays with a lot of poise, a lot of confidence. He dictated the tempo of the game. He played the way I envisioned him playing when I recruited him back down at Lincoln High in Dallas his senior year. ... When he takes care of the ball, getting other guys shots, and he's being aggressive getting to the line, we're winning games. When he doesn't, we're struggling."

Sutton shared that Cowboys announcer Dave Hunziker pointed out a revealing statistic to him that measures how heavily the Cowboys relay on a strong performance from Eaton. In the team's victories, Hunziker told Sutton, Eaton has averaged eight free-throw attempts, with 37 assists and 14 turnovers. In the losses, he has averaged three free-throw attempts with 23 assists and 25 turnovers.

The ability of Kansas guards to limit penetration has been a point of emphasis for the Jayhawks, and Eaton has the ability to test that KU vulnerability. Collins has been the least effective of KU's three guards at keeping his man in front of him. Some of that can be attributed to his injuries.

Richer and deeper with talent than Oklahoma State, KU doesn't rely as heavily on Collins as the Cowboys do on Eaton.

"I look forward to the challenge of facing Kansas, period," Eaton said. "Sherron, Russell (Robinson), Mario (Chalmers). I played against Mario a couple of times in high school."

Eaton averaged 7.7 points per game last season, 10.6 this season. His most famous, most improbable shot came a year ago. He chased down a pass he had mishandled, saved it from going out of bounds near midcourt and heaved the ball toward the hoop. It went in as the shot-clock sounded.

The shot came in the triple-overtime classic against Texas. He couldn't make it again if he tried for an eternity, or so it seemed.

"Actually, I've made it two times," Eaton said. "Some young (teammates) said that it wasn't possible. I had to show them that I did do it."

Eaton won't have to hit another circus shot for Oklahoma State to compete with Kansas, but he will need to perform at close to the level he performed in the past two games.

Did anyone see KU great Billy Thomas in last night's Cleavland game? Seems that during the monster trade, Cleavland was left with only 6 roster players, so they called up 2 from the developmental league, including Billy Thomas. He went 3-11 from 3 point land, finishing with 9 points while some ball hog named L. James ended up with 33. At least Billy got another NBA 10-day contract. Rock Chalk.

He shot 11 threes and you are calling somebody else the ball hog?

No doubt Kool. Pretty ballsy for a guy just called up from D-league for a 10 day cup of coffee to jack up 11 threes. 27%...sounds right on Billy's 3 point accuracy in NCAA tourney losses while he was here (that might be generous).

Before everyone calls me out, I loved Billy as a player, but the facts don't lie. He had HORRIBLE games in each of our devastating NCAA losses on his watch. Too bad.

He shot so many threes because he was green lighted to do so. That is why they brought him up he is a great 3 point shooter.

tdomine was probably being facetious calling Lebron a ballhog. He's one of the best there is, so especially with a short roster they're gonna need him to step up. Same with Billy, because he's a great shooter. Let's not get our panties in a bunch over nothing.

Actually Thomas shot 2 for 3 in the 1st quarter and then went on to miss all but one of his next 8 3-point tries. Lucky for him LBJ had his back! His 3 turnovers and 0 assists are also revealing. Somehow I suspect he will be back in Colorado before the 10 day contract is up.

what a poor coaching job at Stillwater