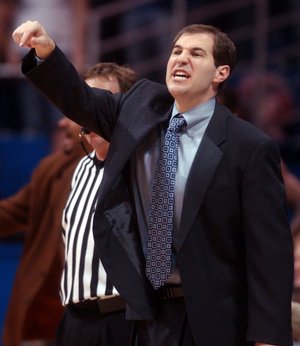 Baylor head coach Scott Drew yells at the Bears from the bench during KU's 76-61 victory in February of 2006 at Allen Fieldhouse.

KU ready to take on Baylor

The Kansas men play for the first time in five days on Saturday against Baylor. It's a matchup of two teams in the top four in the Big 12 conference.

No need to rehash the sad, sorry details that led to the firing of Dave Bliss at Baylor University.

What's important now ... in the eyes of Baylor basketball fans and those around the Big 12 is the fact BU now has one of the top teams in the league five years into the Scott Drew era.

Drew, who battled NCAA sanctions for recruiting violations committed in the four-year Bliss era - a tenure that included the shooting death of a BU player and the loss of several players to transfer - went 12-52 in his first four years at the Waco, Texas school.

This season, the Bears take a 17-4 record (5-2 in the Big 12) into today's 7 p.m. clash against Kansas University at Allen Fieldhouse.

"Players, reading the 'Book of Job' and having great mentors," modest BU coach Drew said, rattling off some reasons for his success at Baylor.

This year's accomplishments include ...

¢ Most nonconference victories in school history (12), including a win at South Carolina on Dec. 19 that snapped Baylor's 25-game road losing streak.

Obviously that's the game of the year in the league, if not the best game in the history of the conference.

"Coach (Jerome) Tang nudged me and said, 'If we foul out one more, do I get to play?''' Drew said in a recent interview with ESPN radio. Five Bears and three Aggies fouled out in the 31â2-hour game. "It was one of those storybook endings and a great one for the Bears to win at the end."

Drew was thrilled at what happened a few hours after the grueling victory.

"It was 1:30, 2 a.m. and several students were out in the rain waiting for us," Drew said of a welcome-home reception on campus. "It's great as a coach to see a community and students at the university so happy. They had so many lean years here. To reward them brings a smile to a coach's face, I'll tell you that."

"You can't focus on anything except, 'This is what needs to be done,''' Drew said of his philosophy in building a program. "It's an every-day process bringing in players we felt could compete in the Big 12 and represent the Big 12. Once players start coming, they make the coach look at lot better."

KU coach Bill Self has been impressed with the Bears' play and Drew's recruiting.

"They've been close and their talent level just keeps getting better," Self said. "Their staff has done a great job recruiting. They started from scratch for the most part.

"It's not an overnight deal. It's a good story. It rivals some of the best stories (in the history of basketball)," Self added.

"I talk to him on the phone, not a lot," Arthur said of Rogers, who averages 12.6 points and 7.8 rebounds. Rogers has made 51.5 percent of his shots and 79.4 percent of his free throws. He had 19 points and 18 rebounds in the five-OT game at A&M. Guard Curtis Jerrells led the Bears with 36 points that night.

"He said they are good. Their guard play is a lot better," added Arthur, who was recruited by Baylor.

"I saw it a little bit," he said of BU becoming a league contender and team worthy of NCAA Tournament consideration. "They had some good players there. They've brought in some more. They have good coaches and players and have come along well."

¢ Road warriors: BU is 4-1 away from home this season. In conference road play, the Bears have won at Nebraska and Texas A&M and lost at Texas.

"They are winning on the road. I'm sure their confidence is sky high because of that," KU coach Self said.

¢ Stats, facts: KU will honor 33 new Hall of Fame inductees at tonight's game. There will be a ceremony at 11 a.m. today at the Booth Hall of Athletics. A list of all inductees is available today on Scoreboard page ... A win today would mark 23 wins for KU for 19 straight seasons dating to 1988-89. ... KU leads the series 12-1, including a 7-0 advantage in Lawrence. KU has won six straight in the series. ... KU is 10-1 against Baylor since the beginning of the Big 12.

Ok, I know that the Bayor - aTm game went into 5 overtimes and I'm sure it was an exciting, intense game. But does that automatically qualify it as the "best game in the history of the conference"? Even the game of the year. Not that I'm disputing it. Heck, I didn't even see it. Therein lies my point, though. Who did see it? Did Gary see it? I would hope so, considering he thinks it's "OBVIOIUSLY" the game of the year. I'll admit that overtime games are very entertaining, but I don't believe a 5-overtime game with most of the scoring coming from freethrows is as entertaining as say a 3-overtime game with teams getting big stops or making buzzer beaters or extremely athletics plays to keep forcing overtime. Purely hypothetical, like I said I didn't see it. Did you?

There is some similarity with KU in that there are 7 or 8 players who can play and they are unselfish as well. We should be fine but may need our "A" game to prevail.

Inducting 33 on one night seems a bit much for the HOF. Hard for any of them to feel special.

Can anyone answer my question ? Here it is, if a player commits and signed a letter of intent but the coach gets fired can that player leave for another collage ?

A player can leave for another college anytime he chooses. If he has signed a letter of intent, he would have to sit out a year unless the first college releases him/her from the letter. It is a little more likely to happen with a coaching change, but not guarenteed. Sometimes, it has to do with the politics involved in the coaching change and where the player is wanting to go.

Flibborder - No. The letter of intent is signed with the school. The school, of course, can release the student after it fires the coach if it so desires.

Ok thanks I was just wondering because of J'Mison Morgan who is commited to LSU and there coach got fired. He had Ku second on his list so it might be possible for him to go to KU now I dont no though.

He sounds committed to LSU...for now.

"Arthur was recruited by Baylor." That is the understatement of the year!! Remember how he had practically commited to them, it was a done deal. Then he had a dream about playing at KU and changed his mind. Imagine how good they'd be if he hadn't had that dream. Damn we were lucky with that one.

The five overtime game is OBVIOUSLY going to be the game of the year. Sorry Didjabuti. Also, I have been to Djibouti. It sucks.

True, true. It IS the armpit of the world.

And I'll say that it PROBABLY is the game of the year. I stand by feeling that you can't decide that entirely on length of game.