Only seven Division 1 basketball programs have posted 20 wins in the last 10 consecutive seasons. Tonight, two of those squads met in Allen Fieldhouse.

The guys (Matt Tait, Jesse Newell) tie up loose ends following KU's 87-60 victory over Kent State. The two give their offensive and defensive grades, name their most valuable and least valuable players and talk about what they liked and didn't like from the Jayhawks in their 27-point win. 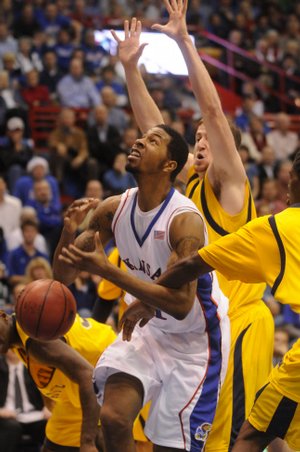 At one point, Kansas University freshman guard Tyshawn Taylor became so frustrated watching the basketball glance off the rim after his under-control drives to the hoop he pressed the sides of his head with his hands in disbelief. He even missed a dunk.

Taylor made just five of 14 shots in an 87-60 victory Monday night against Kent State in Allen Fieldhouse. By his own admission, he “fell asleep,” allowing his man to score five points in a 40-second span.

And, oh by the way, Taylor played an outstanding game again for a team that in many ways looks ahead of schedule.

“There was definitely a lid on the basket for me,” Taylor said. “I felt like every time it was in and out. Every time I looked I was like, ‘Dang, how could I miss that?’ We won, and I played really good defense, so I’m happy at the end of the day. My coaches told me to keep shooting, and my teammates told me to keep shooting, so I wasn’t down at all.”

Kent State guard “Amazing” Al Fisher earned his nickname when he scored 27 of his team’s final 28 points in an overtime victory against St. Louis. He has long range and a clever handle that allows him to score in a variety of ways.

Yet, with Taylor in his face most of the evening, Fisher not only had difficulty scoring, he had trouble getting off shots. He entered the game averaging 21.8 points per game, and Taylor held him to five. Except for that 40-second stretch late in the first half, Taylor pitched a shutout. Amazing.

“I watched him on tape, and I knew he was going to come out and look to score,” Taylor said. “I got into him early, and he never got into his groove.”

Taylor has embraced the role of guarding the opposition’s best perimeter player so that Sherron Collins, the point guard who makes everything go in transition and in the halfcourt, doesn’t have to exhaust himself also having to guard a star.

Despite having so many layups spill off the rim and missing a dunk, Taylor finished with 12 points to go with three steals, three rebounds and two assists.

“I was 2-for-2 from the three-point line, and that’s what I’ve been working on a lot,” he said. “I guess I’ve got to start working on my layups.”

The beauty of Taylor is you know he will work on that and every other shortcoming. He has a lively personality and a large dose of humility, which makes him not only likable but an eager student of the game.

The coaching staff will have enough to show him on film, such as the time he was caught off balance in the second half and allowed Fisher to blow by him. Taylor, who got bailed out by teammates on the play, was mad at himself instantly. He definitely is eager to please.

“I’m still not convinced he’s a lock-down defender, but he’s moving in that direction to convince me of that,” KU coach Bill Self said. “I see a guy who’s 6-3. He’s long. He can slide. He’s quick as a cat. He’s got good hands. There’s no reason why if he learns positioning and has toughness that he can’t be a good defender.”

Which KU non-conference game are you most looking forward to?

KU needs to start pushing Taylor for Big 12 Newcomer of the Year.

Freshman of the year?

How about if we wait until February to worry about Freshman of the Year awards? We'll see how he handles the grind and the intensity of the conference season. The kid has definitely been a great addition. He played a huge game against Syracuse. If he can knock down 3 pointers, his ability to get to the lane will really be a huge weapon if he's tough enough to handle getting hammered.

2T looks awesome so far plus he seems to have a great attitude. Personally I find it hard not to fall in love with this kid. It's more of a brotherly love but still. when we play Texas I hope he completly shuts AJ Abrams down to the extent that Abrams ends up with negative points.